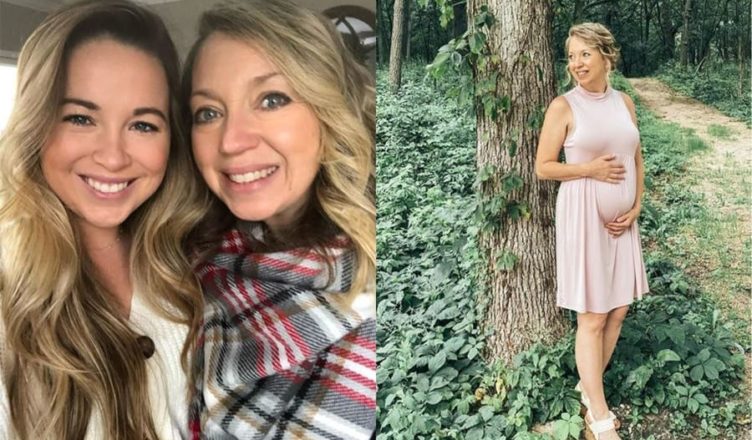 For four years, 29-year-old Breanna Lockwood and her husband Aaron tried getting pregnant, but nothing seemed to work. After trying the natural route for over a year, the Lockwoods decided to try IVF, but this proved to be one of the worst experiences of Breanna’s life. Following her last failed pregnancy, Breanna’s mother, Julie Loving, offered to carry her baby.

It was unconventional, but Julie was willing to do whatever it would take to put a smile back on her daughter’s face. It took some convincing, but Brianna and Aaron finally agreed. Fast-forward to today, and Julie is pregnant with her own grandchild! It’s been a wild journey, and the Lockwoods are more than ready to welcome their new bundle of joy into the world. So, let’s take a look back at Breanna’s road to motherhood!!! 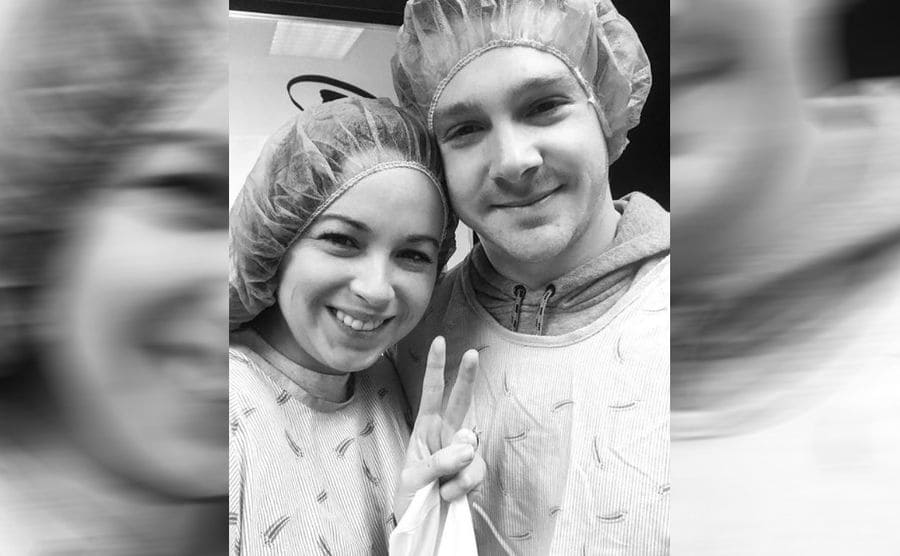 Illinois-natives Breanna Lockwood and her husband Aaron first met in high school. Right after their 2016 wedding, Breanna’s grandfather was diagnosed with cancer. Breanna immediately knew that she wanted her grandfather to have the chance to meet his great-grandchild. So, the couple decided to start a family!!!

However, things didn’t go quite to plan. After a year of trying naturally with no success, the Lockwoods decided to visit a fertility specialist. Breanna had her first round of in vitro fertilization (IVF) in 2017 and thought that she would be able to get pregnant after just one round. Little did she know that this was the beginning of some tough times. 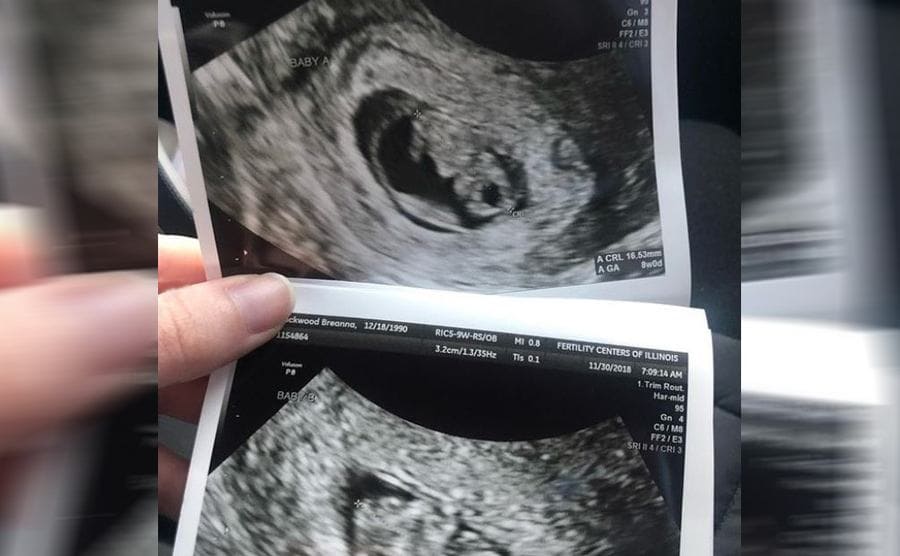 Why Is This Happening?
By March 2018, Breanna was feeling frustrated. By now, she had been trying to get pregnant for two years. While she struggled with infertility, everyone around her was continuing with their lives. It seemed like nearly all her friends were pregnant, and although Breanna was happy for them, their pregnancies triggered something inside of her.

Why couldn’t she get pregnant too? So, Aaron and Breanna decided to take a little vacation to clear their heads. They went camping on the Havasupai Indian Reservation. With breathtaking views and no cell service, it was the perfect destination. But the day after the Lockwoods returned home to Chicago, they received some bad news… 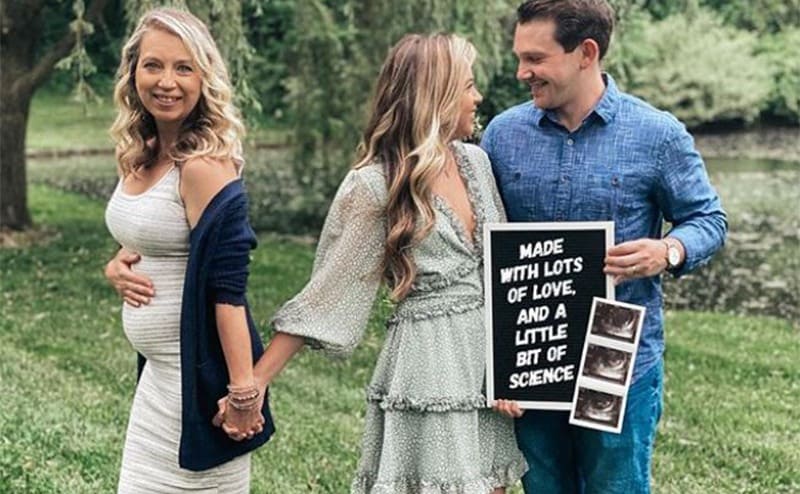 Her second transfer was negative, and her grandfather had died of cancer. He’d never meet the child she was desperately trying to have. Breanna decided to start trying for a baby again a few weeks later. She decided to have a hysterosalpingogram (HSG) to see if her uterus was in good working order.

“I was terrified for my HSG. I’ve heard the horror stories on the support pages and use google way [too] much,” Breanna wrote on Instagram. The procedure went flawlessly. Doctors found polyps, which was one of the reasons why Breanna couldn’t get pregnant. After clearing her tubes, Breanna was positive that her infertility problems were finally behind her. 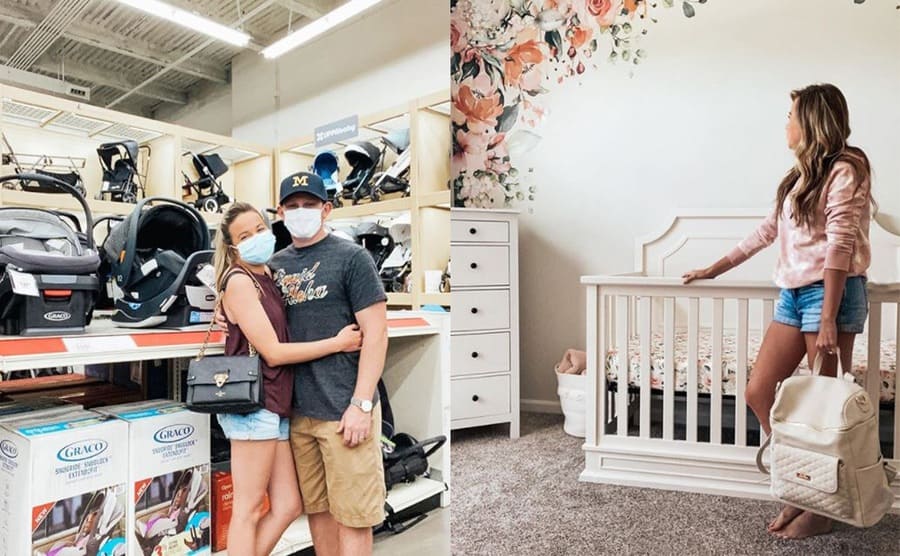 Excited, Breanna began her next round of IVF in June 2018, with her third transfer scheduled for the end of July. Now all the Lockwoods could do was wait to see if the embryo took. Breanna anxiously took an at-home pregnancy test and was stunned by the results. There were two lines! “I literally had to go look at these tests every hour or so,” Breanna wrote on her Instagram page.

“I couldn’t even believe it. This was the first time I had ever seen two lines.” But little did she know that her rollercoaster had just begun. On August 17th, Breanna received the soul-crushing news that she had a chemical pregnancy. A few weeks later, Breanna and Aaron decided to take another trip to clear their heads. 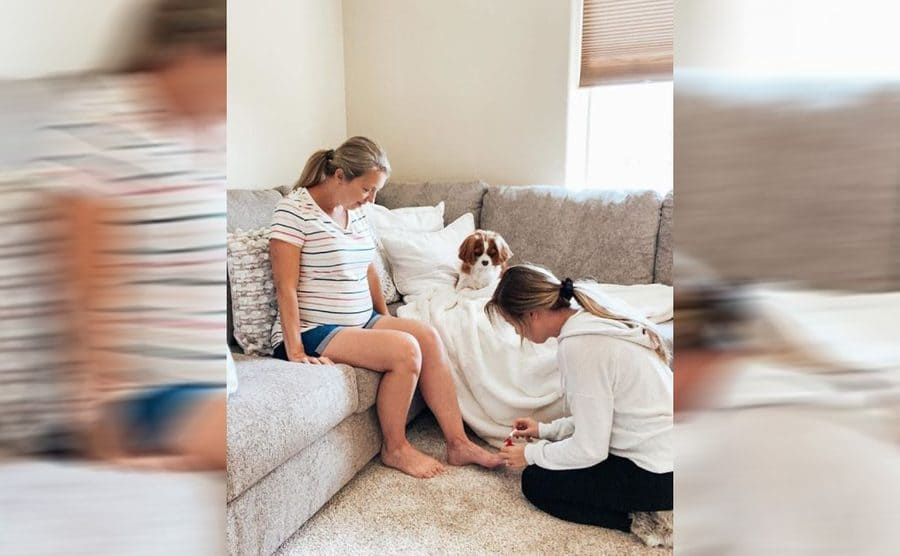 Hitting the Road
This time, Aaron and Breanna hit the road to Gatlinburg, Tennessee. “Every time my husband and I get bad, real bad news, we plan a trip,” Breanna wrote in 2019. “It gives us something to look forward to, even if it’s just a drive or weekend trip.” But it seemed like nothing they did helped them escape the reality of their infertility.

Feeling defeated, Breanna prepared for her fourth transfer in October 2018. Maybe this time, Breanna would get lucky. A few weeks later, the couple received some amazing news. Her beta levels were rising, meaning that she was possibly pregnant! The Lockwoods scheduled an ultrasound, anxious to see what the technician would find. 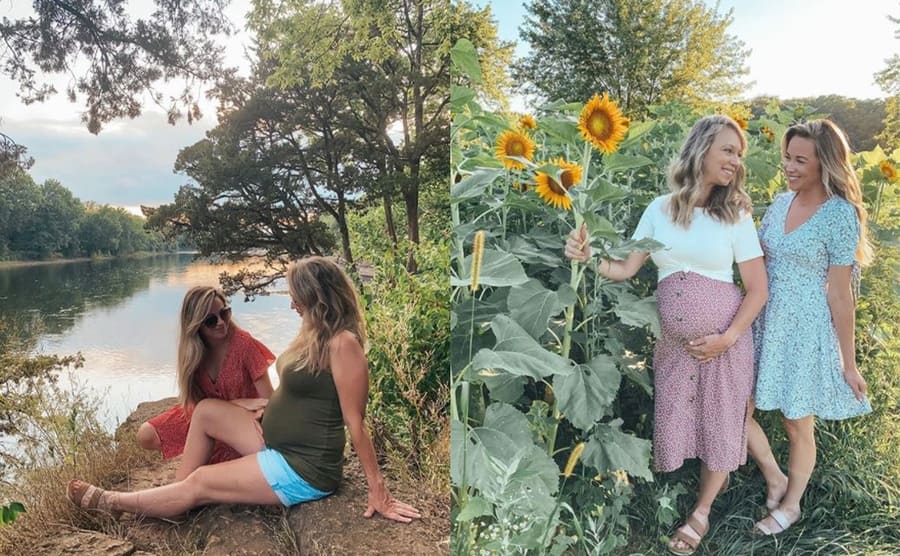 Double the Trouble
After what seemed like an eternity, the ultrasound technician finally began to speak. “Okay, so there’s a heartbeat here, oh and also a second heartbeat,” she told the couple. Twins! Breanna was pregnant with twins! “My mind went fuzzy and instantly sobbing,” Breanna wrote. “Looking over at Aaron, he looked white and maybe even scared!”

At eight weeks, the babies looked perfect. Their growth was right on track, and their heartbeats were strong. The couple finally got what they had wanted for so long! But when Breanna went to her first OB appointment at 10 weeks, she received some devastating news. Her doctor couldn’t find a fetal heartbeat in either baby. 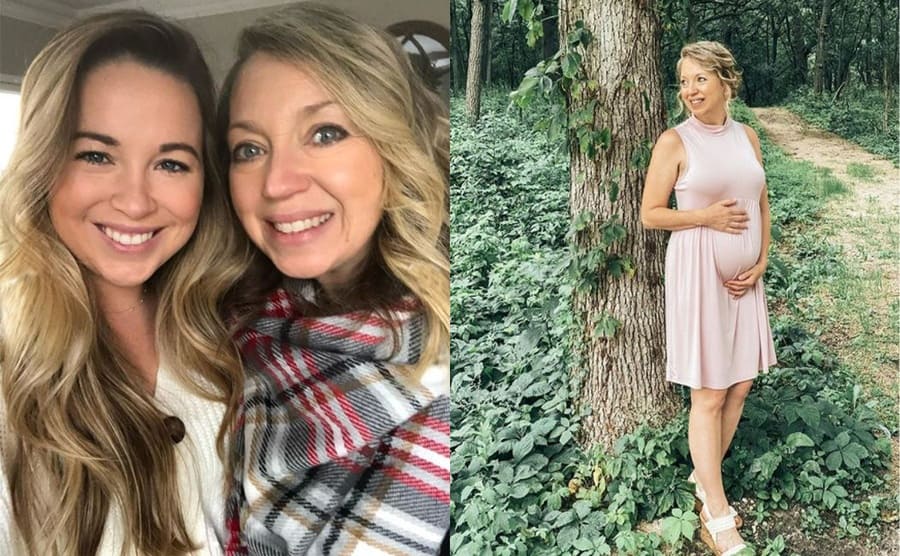 A Gut-Wrenching Loss
Breanna had to wait over a week for the D&C. “I couldn’t eat or move. I think I just cried for hours on end,” Breanna later wrote on her Instagram page. “How can life be so cruel? How can you run every test in the book known to doctors and still have this outcome?”

After sharing the devastating news on her Instagram, Breanna says that she was overwhelmed by the love and support from her followers. “It’s nice to speak with other women going through the same things, this journey can be so isolating,” she wrote in March 2019. “I can’t wait to cheer on everyone else through this process as well!” It’s nice to see that the Lockwoods found a support system.

Finally, A Diagnosis
After her fifth embryo transfer failed, doctors finally figured out why Breanna couldn’t get pregnant. She has Asherman’s Syndrome, which is the formation of scar tissue in the uterus. While Google says it is a rare condition, Breanna learned that it is actually more common because it often goes undiagnosed.

She also learned that many doctors are not only untrained to look for signs of Asherman’s, but they do not know how to remove it. After doing lots of research, Breanna found a community of women on Facebook who were suffering from the same condition. Some women recommended an Asherman’s specialist who worked out of Boston. So the Lockwoods packed their suitcases and headed to the east coast.

However, this was an expensive option, especially since they had been trying IVF for the past few years. So, the Lockwoods made the difficult decision to sell their house. Luckily, Breanna’s parents welcomed the couple into their home with open arms. “It’ll be tight living, and ups and downs along the way, but my parents are like my best friends and closest people in my life,” Breanna wrote in November 2019.

Her Only Option
Breanna says that there are two options for surrogacy, but they are both very expensive. While some couples prefer to find a surrogate through an agency, Breanna and Aaron decided to take the independent route. Breanna hopped on Facebook, where, she says, there are great groups that help intended parents and possible surrogates chat and hopefully match.

Her mother, Julie Loving, went through the wringer of health tests to see if she could even qualify. Several doctors told the Lockwoods that her 51-year-old mother was too old to get pregnant, especially since the standard cut-off age for surrogates is 45. But Julie was in tip-top shape. Not only is she a double Boston Marathon runner and a triathlete, but Julie also says that she is in the best shape of her life.

Healthier Than a Horse
“I’ve run 19 marathons and done many triathlons,” Julie told Good Morning America. “I felt like health-wise, I could do it, and I had really easy pregnancies with my two kids,” Julie says that the idea to carry her daughter’s baby actually came to her after Breanna miscarried twins. Although Breanna wasn’t on board at first, Julie kept pursuing the idea.

Julie also says that people often question her decision to carry her daughter’s baby. However, Julie says that the decision was very easy. “The love of a mother feels the pain of their children when she can see the sadness in their eyes instead of happiness,” Julie began.

Everything’s Looking Up
However, with each kick, Julie says that she is reminded that Breanna’s baby girl is growing and thriving. “Each day that passes, my heart is filled with joy when I see Breanna’s eyes beginning to sparkle again, and that is the light that keeps me going being a mother,” Julie says. It seems like things are finally starting to look up for the Lockwoods. 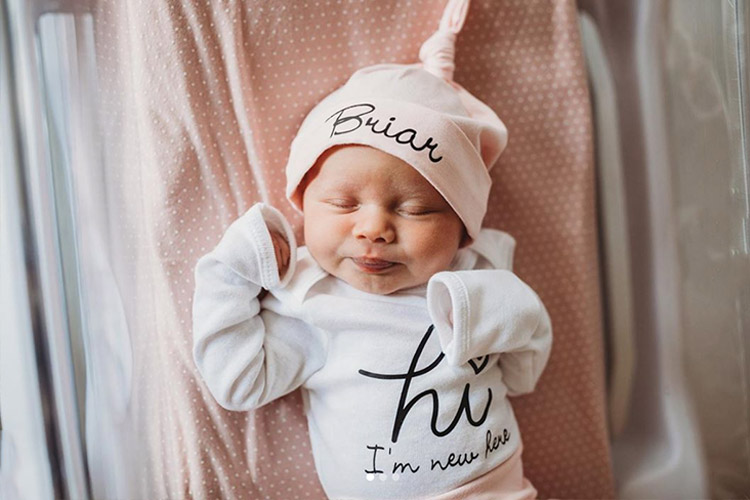 Reaching 30 Weeks
At 30 weeks, Breanna says that her daughter is very active. Julie sends Breanna videos of her belly moving all the time. “So fun to feel her kick, but I swear soon as I put my hand on her stomach, she stops!” Breanna wrote in September 2020. While Julie typically eats very healthy food, this pregnancy has her craving all kinds of sweets!

Breanna should document her journey, especially since infertility is more common than most people realize. One in every eight couples has difficulty getting pregnant, but they suffer in silence. Breanna hopes that her story will give hope to other struggling couples. When she first started her Instagram page, she used it as a way to connect with other women who were dealing with infertility issues.

Breanna wrote, “This was the place where I didn’t have to feel completely alone throughout the process.” Breanna is glad she decided to tell her story. “Every message I’ve gotten from women sharing their stories reminds me why I hit publish. I was looking for these.