Journalist Visits Animal Shelter To Cover A Story. Then A Dog Hugs His Legs And Refuses To Let Go 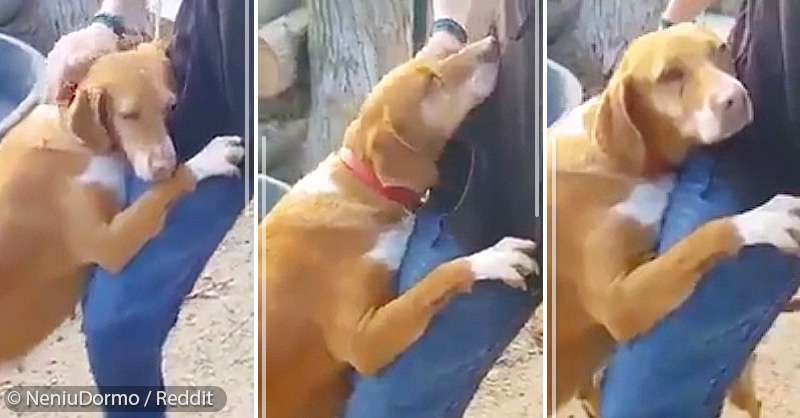 Every pet owner has a unique story about how their beloved animals became a part of their families. Some relationships between pet owners and their pets develop quickly, while others take time to develop.

But this has to be a canine version of love at first sight. And, thanks to the video, hearts are melting all around the world. A dog fell fully in love with a journalist covering a story at an animal shelter in a brief video shared online. The dog was seen wrapping itself around the man’s leg as the unidentified journalist stood! The journalist must have guessed that the dog needed companionship and, for some reason, it had chosen him. Now, when you’re specially chosen to be a dog’s dad like this man was, how could you say no? According to the info provided in the post, the journalist did indeed adopt the dog and we’d like to think that they lived happily ever after.

The story not only warmed thousands of hearts but also inspired others with similar tales to share theirs. One Reddit user, AbsentK, talked about how they came to adopt their dog. They arrived at the shelter and waited in the room until the dog came in to join them. After some initial hesitation, the dog walked straight to the wife and put her paws on her chest. The couple had no doubt that this was the dog for them.

These beautiful stories of adoption are enough to make anyone rush out to go get themselves a four-legged pal. We hope you do. And that you come back with a similar story of animal love and devotion to share with the world.