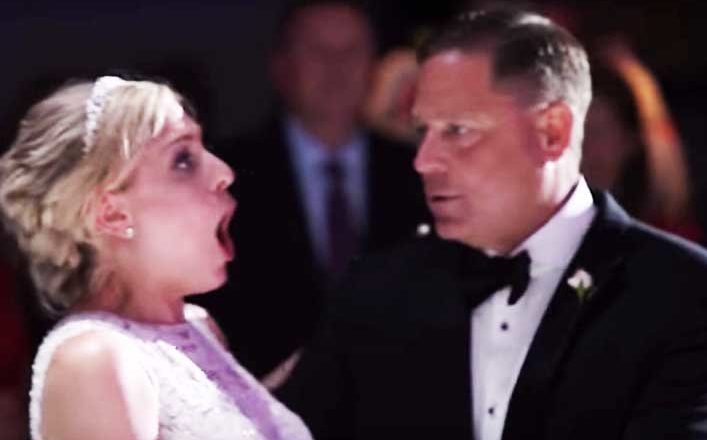 Every girl grows up dreaming about her wedding day. It’s one of the most special and important days of anyone’s life, and one that will never be forgotten. When Lisa married her now-husband, Paul, in August 2016, the day was perfect. After saying “I do,” the happy new couple headed into their reception, where Lisa’s dad, Dave White, gave his toast to the bride and groom!

Following his speech, the happy father walked over to the bride to lead her in the father-daughter dance. The tradition is standard in most weddings, as it’s such a special moment between a girl and the first man she ever fell in love with!

“My Little Girl” by Tim McGraw was the perfect music for Lisa at the time. Lisa and her father chose the song months ago because she is an avid country music lover. She had a feeling it would be amazing, but she didn’t understand how perfect it would be.

As they took their places on the dance floor, Dave held his daughter in his arms and turned her away from the stage. As soon as the music started playing, Tim McGraw walked out onto the platform and began singing directly to Lisa and her father! She, like the rest of the audience, was taken aback. The only person in the room who knew about the surprise was Dave!

“It took everyone about 30 seconds to realize what was happening,” Paul said. As Tim McGraw closed the song, he walked down from the stage and embraced Lisa in a bear hug. He then hopped back up on stage and played for another 45 minutes—giving the bride and groom, and all of their guests, an exclusive wedding “concert” in their honor!

Paul later tweeted a picture of he and Lisa with Tim, thanking the country star for making their wedding night “so awesome.”