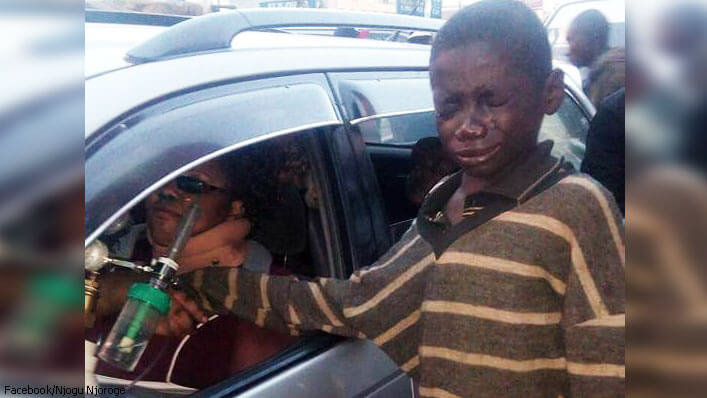 We’ve all seen them—the homeless beggars who stand near stoplights and on the streets of the downtown, asking passersby for change. Some people give them money or buy them a meal. But most scoff under their breath or turn the other cheek, assuming that any money given to this poor person will automatically go to dr..ugs.

We’re used to seeing mature folks begging for money and food in the United States. Many children, however, are out begging for survival in countries all over the world. One of those children is John Thuo. The young boy from Nairobi, Kenya’s streets, has spent years collecting change from passers-by.

It’s no way to live, but it’s all John had ever known, and with no family to properly care for him, the orphan was alone in the world.One day, John approached a car to ask for money. But as the driver rolled the window down, the young boy was alarmed by what he saw.32-year-old Gladys Kamande was driving in her car, hooked up to the tubes and breathing machines that keep her alive.

Gladys explained to John that her lungs had collapsed, so she had to rely on oxygen tanks to keep her functioning. At that moment, little John was moved to tears. He grabbed Gladys’ hand through the window and with his heart of gold, decided to give her all of the money he’d been given that day. His emotional reaction and admirable sacrifice captured the attention of the Internet after a person standing nearby had the pleasure of watching this story unfold.

People couldn’t get enough of John’s selflessness after they posted the photos on Facebook. The photo and tale quickly went viral on social media in the days that followed. Donations poured in quickly for the woman in need of medical attention and the homeless youngster with a big heart. Gladys was able to obtain treatment in India thanks to $80,000 contributed by strangers.

John was rescued by a woman named Nissy Wambugu, who adopted him into her loving home, and made it possible for him to attend school.John’s selflessness is inspiring. It’s a beautiful reminder that even when we have it bad, there’s someone who probably has it worse. But caring for others is what we’re called to do. I challenge you today to thank God for your circumstance, and praise Him through the storm. A grateful heart is all God needs to move on your behalf, just like He did for Gladys and John.