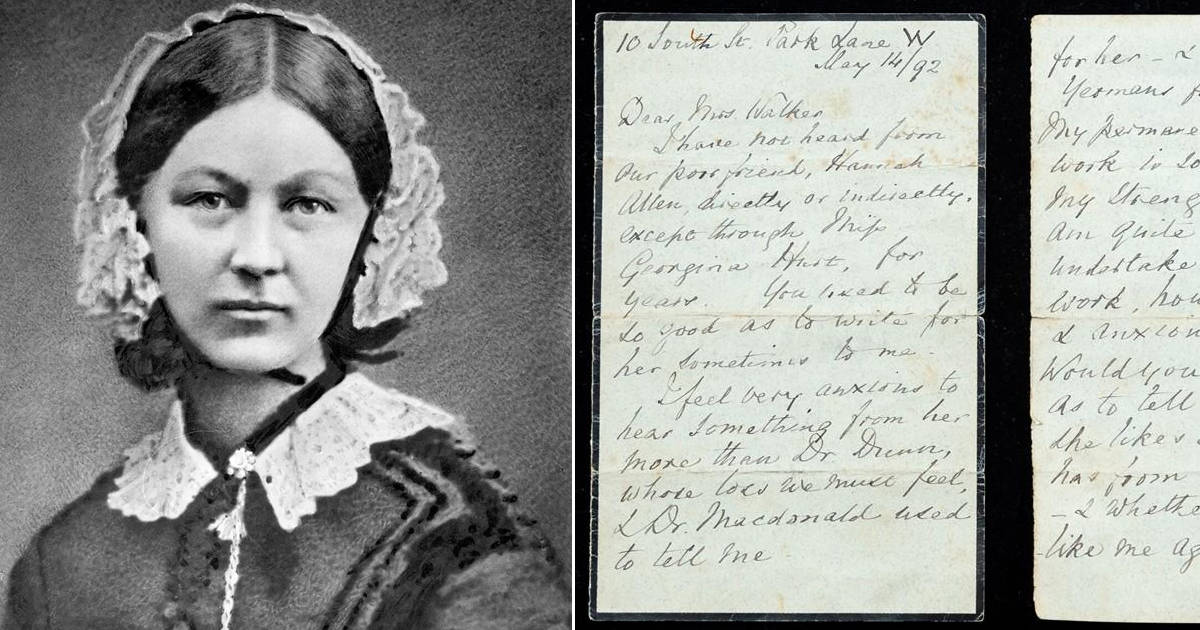 Hansons Auctioneers recently got their hands on a series of letters penned by Florence Nightingale and addressed to a Mrs. Walker. The seven missiles, which highlighted the great compassion of “The Lady with the Lamp,” were written between 1892 and 1894. The notes, which remained undiscovered for decades at the house in Holloway, Derbyshire, “epitomize all that Florence Nightingale stood for,” experts said. The nursing icon’s kindness was demonstrated in the letters, which were written to inquire about the well-being of Hannah Allen,

who lived in Holloway near Matlock, a location close to Nightingale’s old family home in Lea Hurst. In the missives, she referred to her as “Sister Hannah Allen” and a “good old friend.” Mrs. Walker was Hannah’s carer, and Nightingale wanted to know how she was doing at the time. It has been over 120 years since Nightingale wrote the letters; she was in her 70s when she penned them. She mentioned being overworked and “for months together such a prisoner to my room from illness.”

“These letters are a wonderful find. They epitomize all that Nightingale stood for – boundless kindness and compassion and the importance of gaining the right care. They demonstrate her dogged determination to ensure the welfare of others. Despite being overworked and ill, Nightingale continually looked out for Hannah,” Jim Spencer, a paper expert at Hanson’s, said.

“Mrs Walker, the recipient of the letters, was the vendor’s great-grandmother and acted as a go-between. Mr and Mrs Walker lived in Holloway, near Lea Hurst. Some of the letters thank Mr Walker for supplying meat and the vendor confirmed his ancestor was a farmer and butcher in Holloway.” The seller inherited the letters through descent in 1986 and found them in the family Victorian desk where they remained hidden for decades.

“We’re extremely proud to own them and to have a family connection to Florence Nightingale. However, we feel it’s time for the letters to go to a museum or to keen collectors to be preserved for future generations,” the seller said.

An excerpt from one of the letters follows: “I’m looking forward to hearing from her… Please let me know how she is at night and during the day – mind and body – and give her my love and God’s blessings. Is there any part of the Bible that she doesn’t have that is printed in huge characters that she would like to have? My continual and constant labor is so exhausting that I am unable to take on any additional work, no matter how eager and willing I am to do so.

Would you be so good as to tell me whether she likes the things she has from Mr. Yeomans – & whether she would like me again to send her pounded meat & orange jelly. Thank you so much for your kindness to her…Florence Nightingale.”

“It’s a privilege to sell items which demonstrate Florence Nightingale’s wealth of human compassion. She is a British icon whose legacy should never be forgotten. It’s something I feel so strongly about, Hansons held a charity auction in lockdown which raised more than £18,000 for London’s Florence Nightingale Museum,” Charles Hanson, owner of Hansons Auctioneers, said.

If you want to know more about Florence Nightingale, here is a short film by History Channel.