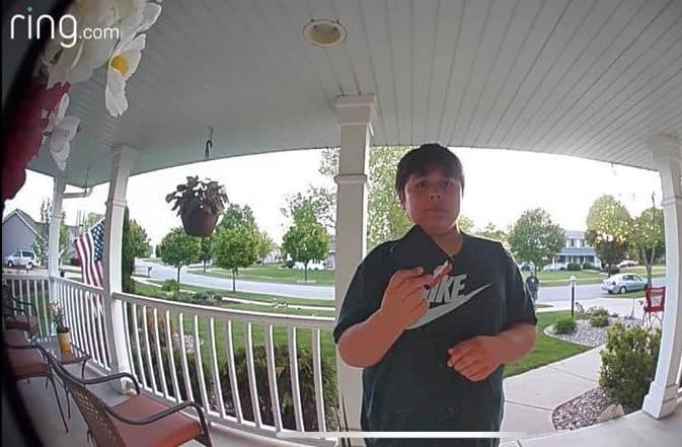 It is so easy to dismiss most children these days as insolent and spoiled, and yet there are many others who are kind, polite, and well-behaved. Vince Hietpas, however, took that a step further. After finding a wallet on the street, the honest 11-year-old took the time to return the missing item to its owner, despite his own family’s financial difficulties.

On Memorial Day, Vince was walking along Voyager Park in Wisconsin, when he and his father Lorenzo chanced upon a wallet on the ground. Father and son searched through the wallet for a clue to the owner’s identity. After finding a driver’s license, they tracked the address so they could return the wallet to its rightful owner. Chase Dahlke had only realized that he was missing his wallet when he got home after fishing in Voyager Park. He had resigned himself to the fact that the wallet was lost forever until Vince showed up on their doorstep…

The Dahlkes were actually at their neighbor’s house when Vince stepped onto their porch. Through a camera on the doorbell, Jason, Chase’s father, saw the young boy hold up the missing wallet, and he immediately rushed home. Jason was happy to reward Vince for being honest and his thoughtfulness and the effort to return the valuable item, but could only give him $2, the only cash left in the wallet.

It’s a testament to Vince’s character when he humbly and excitedly accepted the amount from Dahlkes. Good deeds like these should be celebrated! Similarly, two young boys returned a wallet with $495 intact to its owner. 12-year-old David Gray and 11-year-old Case Baker found the wallet in a gas station in Arlington, Washington, and promptly returned it to owner Scott Ames. Gray said, “My mom always tells me to not steal anything.” The jolt of positivity came at the right time as Ames was going through a divorce. He happily rewarded the two with $100 for being honest.

Still, Chase’s stepmom Michelle wanted to do more. Using photos from the camera doorbell, she posted on Facebook, “Who knows this kid? We want to reward him! So thankful for him and his dad. There is so much hate in this world and so much negativity. It’s time to focus on the positive. This kid and his dad found Chase’s wallet by Voyageur park. Instead of stealing everything Chase owns, they saw his address on Chase’s driver’s license and dropped the wallet off all intact!

There is so much good and optimism in the world that it is past time for us to focus on it. Thank you for raising such a wonderful child, gentle sir.” Michelle was able to contact Vince and his father thanks to the internet community, which did not disappoint. Only then did the Dahlkes comprehend the extent of the family’s generosity. Lorenzo, a worker at a meatpacking company who had recently recovered from COVID-19, was juggling different odd jobs to keep his family afloat.

He couldn’t return to his job because he had difficulty breathing, an after effect of his bout with COVID-19, through the personal protective equipment required at work. Despite ongoing hardships, however, Vince and his father did not even think twice about restoring a precious item to its owner. This further galvanized Michelle into action. The dad had COVID and was out of work.

This family still gave the wallet back even though they have nothing! This family could use some love and support from us. Thankful we found them and wish we could provide more to this wonderful family. The family wanted you all to know they are so grateful for all the kind words and love! The boy enjoys reading all the comments and says thank you!”
Determined to help Vince and his family, Michelle also organized a GoFundMe campaign. The response has been both overwhelming and heartwarming. The page shows the Dahlkes giving donations, gift cards, and a host of another present to Vince and his family.

Michelle relates that when she asked Vince the kind of reward he wanted for himself, the boy replied, in all humility, that all he wanted was socks since he and his father were sharing socks through these tough times. The GoFundMe campaign has since raised 10,810 of its $15,000 goal. In their time of need, honest Vince and his father still did the right thing. The Dahlkes should also be commended for their efforts to help Vince and his family. Hopefully, these two families will inspire others to always act with kindness and compassion.