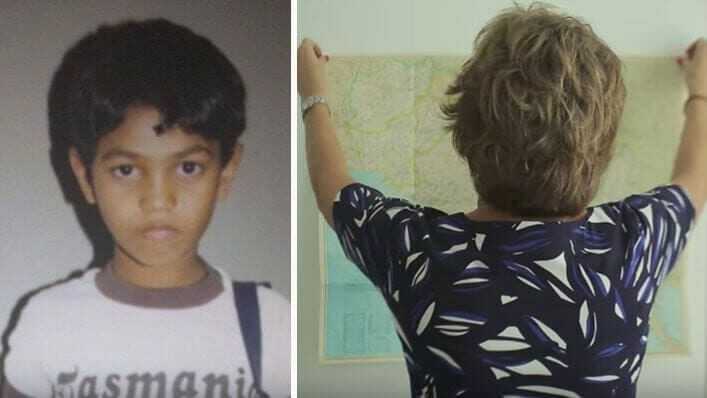 When Saroo Brierley got on a train with his brother Guddu at five years old, he never knew that he’d be on a 26-year journey home. The two brothers boarded a train in their hometown of Ganesh Talai, India. Guddu told Saroo to wait where he was and he’d be back for him soon. So Saroo closed his eyes and went to sleep, awaiting his brother’s return!

The five-year-old woke up the next morning on an empty train. There were no passengers left, and Guddu was nowhere to be found. Saroo was lost. He didn’t know his family’s name or where he was from, so he was adopted into an Australian family, and given a wonderful life.

But like most adopted children, Saroo always longed to be reunited with his biological family again—especially because he had lived his early years with them—loving them and being loved by them.

In 2013, Saroo turned to Google Maps and Google Earth to virtually navigate his hometown. He didn’t know the name of it, but ever since he was a little boy growing up in Australia, his mom had put a map of India on his wall so he’d never forget where he came from.

It never ceases to amaze me—the insurmountable ways we can use technology in this day and age to connect, unite and discover. Saroo’s journey home spans nearly three decades, but one thing is certain: When he hugged his mother for the first time, it seemed as though he’d never left.

Saroo was given incredible opportunities that wouldn’t have been possible had he not fallen asleep on the train that day.

He was able to care for his mother now in ways he never could have—if it weren’t for his Australian family adopting and raising him. Saroo’s story of courage and perseverance is inspiring. And it’s a reminder of how radically adoption can change a child’s life.

Today, his journey has been made into an award-winning film called Lion, which took the red carpet by storm this award season! Nominated for SIX Oscars, FIVE Golden Globes, and Winner of a variety of others, Saroo’s journey home is one you don’t want to miss!