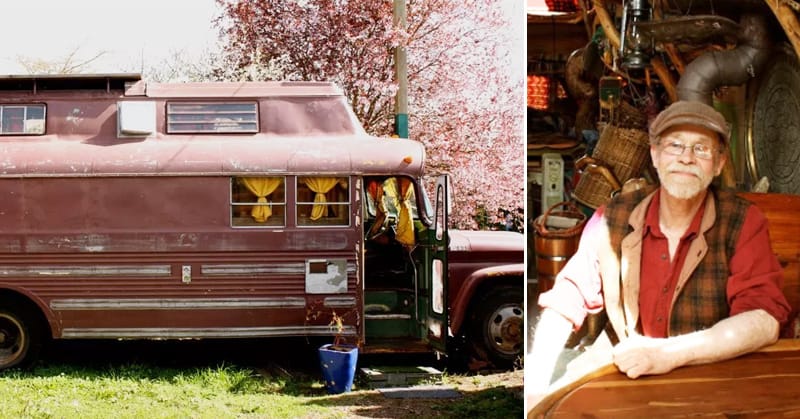 Retiring from work is what most people look forward to. It means that they would no longer have to deal with the 8-5 daily grind. Some people travel to their dream destinations, while some opt to save up their retirement fund so they can get by their daily needs!

There is not much activity that people can think of for retirement. But, 70-year old Greg Flint did a very unique goal that the young and old dream of building a fairytale-like paradise out of a beat-up old bus.

Flint and his buddies (a couple) decided to drive the 30-foot long 1965 Chevy bus, which they christened “Buster,” to Mexico if Greg could properly fix it. But, as luck would have it, the pair split up.

Flint offered the couple money to purchase Buster, but they declined and instead gave Buster out for free. Now, “Papa Smurf,” as his friends refer to him, has completed the transformation of Buster into a fully functional home that appears to have been created by the Smurfs.

Buster already had major modifications in the past such as the welded upper windows that gave way to more build-able space and natural airflow. Buster looks like an old broken bus on the outside, but the inside can transport you to an entirely cozy, new place.

It has a new interior which was Bilbo Baggins hobbit hole-inspired. The Interior and Furniture. Flint designed the bus interior using old, twisted cedar tree. He used logs for the structural support of the major corners.

These materials transform the dilapidated bus into an organic light-filled space inspired by nature. Cabinets, chairs, tables, book shelves, and dressers were all made from the same materials.

Buster has a kitchen where Flint may cook his food as part of his fully functional home. His daughter had given him an old cedar chest, which he used. He made the countertop, kitchen table, and bench backs out of it.

To make the most of the space, he covered the stovetop with copper, which also served as a table extension. He also hung cooking utensils from curved wooden poles and placed the same material over the stove to divert fumes out the window. The kitchen’s design blends nicely with the rest of the house’s decor.

Buster used to have an old ironwood stone that overheated the entire space and forced Flint to eradicate the fire. This left him freezing during the winter. This time, Flint made sure that his new home is cozy even during the cold days. He replaced the wood stone with a soapstone fireplace stove which can hold fire for two to three hours without overheating the space!

As a retired skilled builder and stonemason, Flint sure did an awesome job building his dream retirement home. If you are impressed with his skills and passion, don’t forget to share this feel-good story on Facebook!