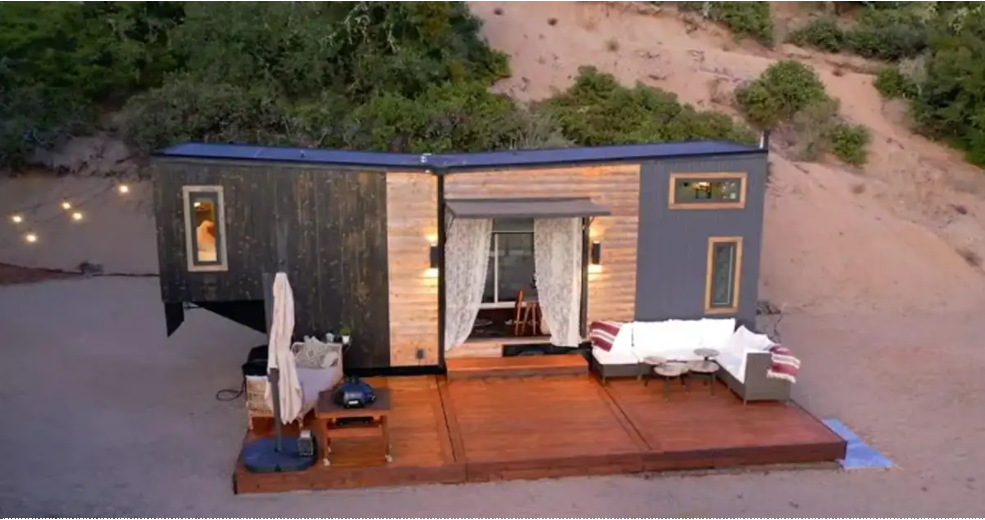 The tiny house movement has seen tremendous growth over the past few years. More and more people are switching from living in regular-sized homes to ones that are under 400 square feet – the size of a typical tiny house and some of them have a gorgeous modern luxury interior design.

Downsizing your living space equates to saving up on expenses, which is the reason most individuals get on board with the trend. This is one of the primary motivations behind this California couple’s decision to invest in a tiny house. Take a look inside Bela and Spencer Fishbeyn’s modern luxury home in the mountains of Santa Cruz, California!

Bela and Spencer used to live in the San Francisco Bay area, but after realizing that they spend approximately $30,000 per year on rent, the couple thought there must be a more efficient way for them to use their money. They both weren’t city people; they prefer traveling, getting outdoors, and enjoying nature. Because of this mutual interest, owning a property in the mountains became one of their goals.

Buying a house, let alone a nice one, is something they couldn’t afford at the time, so they looked into starter homes. That’s when they came across tiny houses. They found the perfect parking spot for their trailer home through Airbnb and decided to rent it out while they’re traveling, which they do for about two-thirds of the year. The money they earn from renting it out pays for their travels and the house itself.

This 300-square foot modern luxury home on wheels took six months to build. The couple made sure they wouldn’t compromise on anything, so they tried their very best to make it a real family home.

They wanted the tiny house to feel as open as possible and give off the vibe of being “inside and outside” at the same time. So, they furnished it with a large deck where they’ve put a sofa, a dining table, and a ceramic grill. They also set up a canvas tent in the back of the home.

Rather than cramming the house with multi-functional furnishings, they gave each room its own distinct role. A kitchen, office, master bedroom, bathroom, kid’s bedroom, kid’s play space, and walk-in closet are all included in the tiny house. It may appear to be a lot for such a small property, but it’s astonishing how they’ve managed to fit everything in.

Once you enter, you come into this big open space in the center. There is a dining table set up like a little bar. On the left is the kitchen, where there is a full sink, dishwasher, mini convection, five-gas burner, and a full-size refrigerator. The stairs pull out and reveal storage space where they store another dining table used to host dinner parties.

Cooking was a big part of their lives as Spencer used to be a chef, so they didn’t compromise on the kitchen appliances. They also placed the washer dryer in the kitchen to make their bathroom more spacious.

The master’s bedroom, which is Bela’s favorite room in the home, features a cozy king-size bed and picture windows on every side. They also installed sliding doors to separate it from the other parts of the house. The bed also lifts up to reveal additional storage underneath. At the other end is a fold-up desk attached to the wall, which serves as their little office space.

They constructed their 3-year-old daughter, Escher, her own bedroom in the attic, which she can access via a ladder because co-sleeping didn’t work for them. It has a twin-size bed as well as a small play area at the foot of the bed.

The bathroom is around the corner, with a walk-in closet, sink, toilet, and a full-size shower whose floor is charmingly accentuated with river stones. The modern luxury interior decor of this family’s modest residence is truly amazing! Take a look inside Bela and Spencer’s little house in the video below.