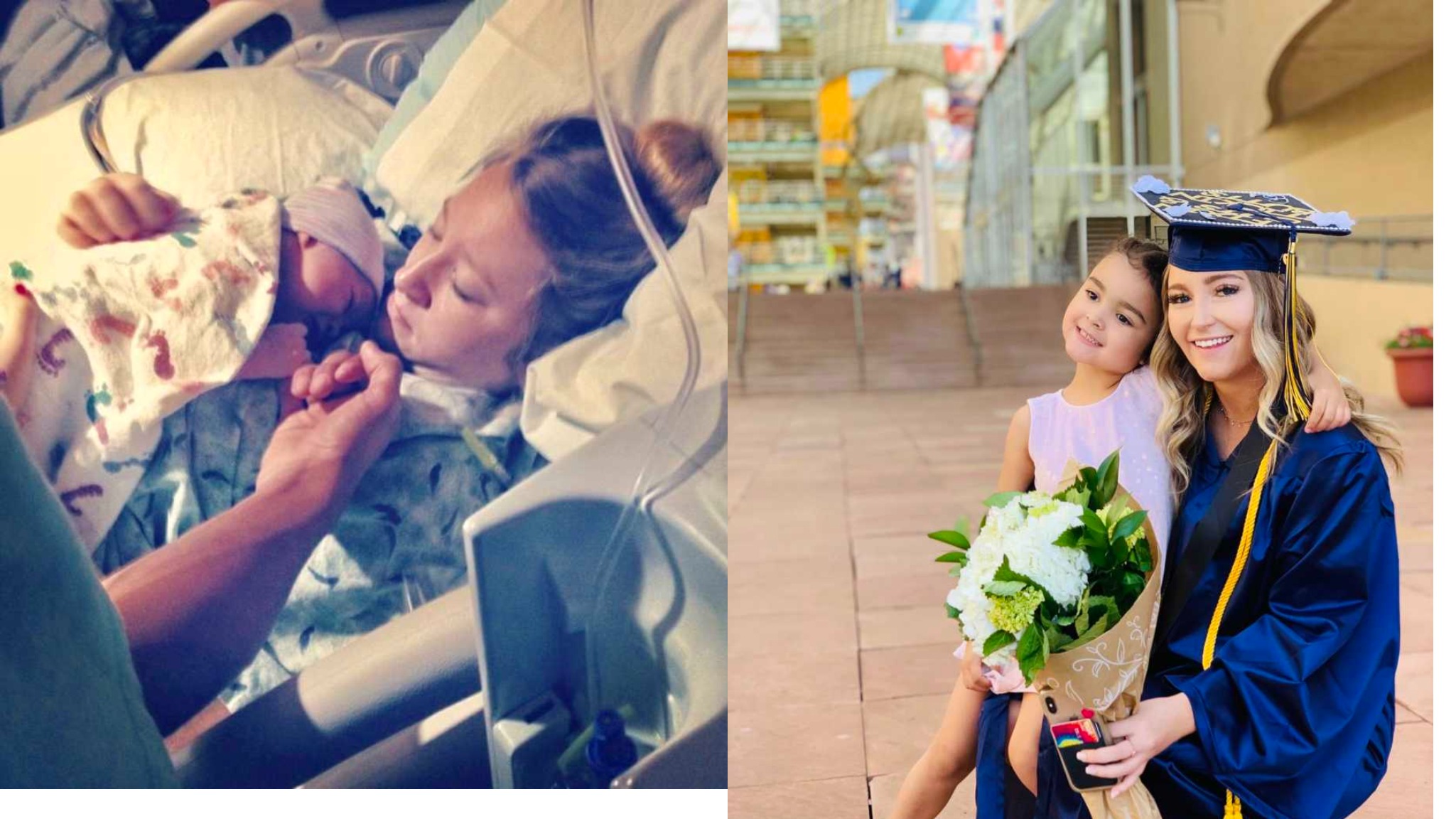 “At 16 I sat on my bed crying to my sister with a positive pregnancy test in hand. I had been with a boy on and off for a year, I was young and in love. That day, I became a statistic. This was not something I was prepared for. I planned on going away to college and doing stuff normal teenagers do. I realized at that very second my whole life was about to change. I cried for hours on hours!

My little sister held my hand and kept telling me it was going to be okay. When I could barely breathe, she squeezed tighter reassuring me I could do it, that I helped raise her and she believed in me. My mom walked in the room and knew something was wrong. The words, ‘I’m pregnant’ trembled out of my mouth. She looked at me with disappointment and shame! 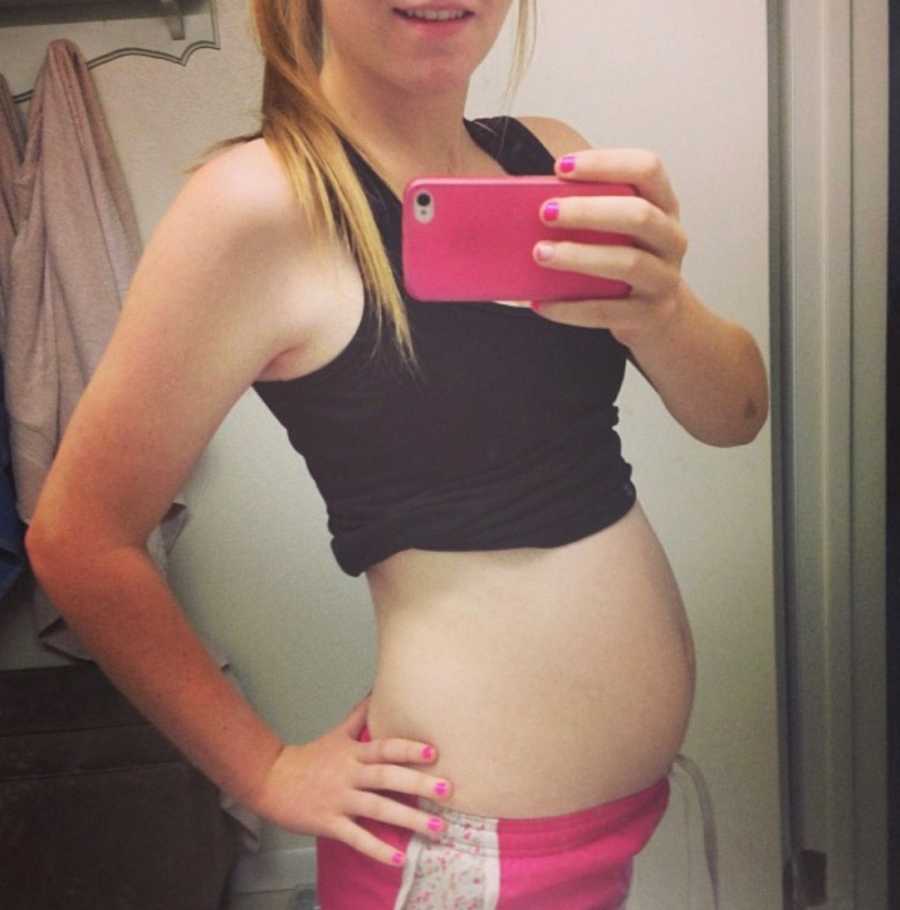 I felt my heart sink into the floor. My stepdad then came into the room screaming and told me I had to get an abortion and did not have a choice because I was under 18. I knew that this was not true and I knew I could make my own choice. I made the conscious decision to keep the baby. When I went to my first ultrasound and I heard the heartbeat, I knew this was the right choice for me. 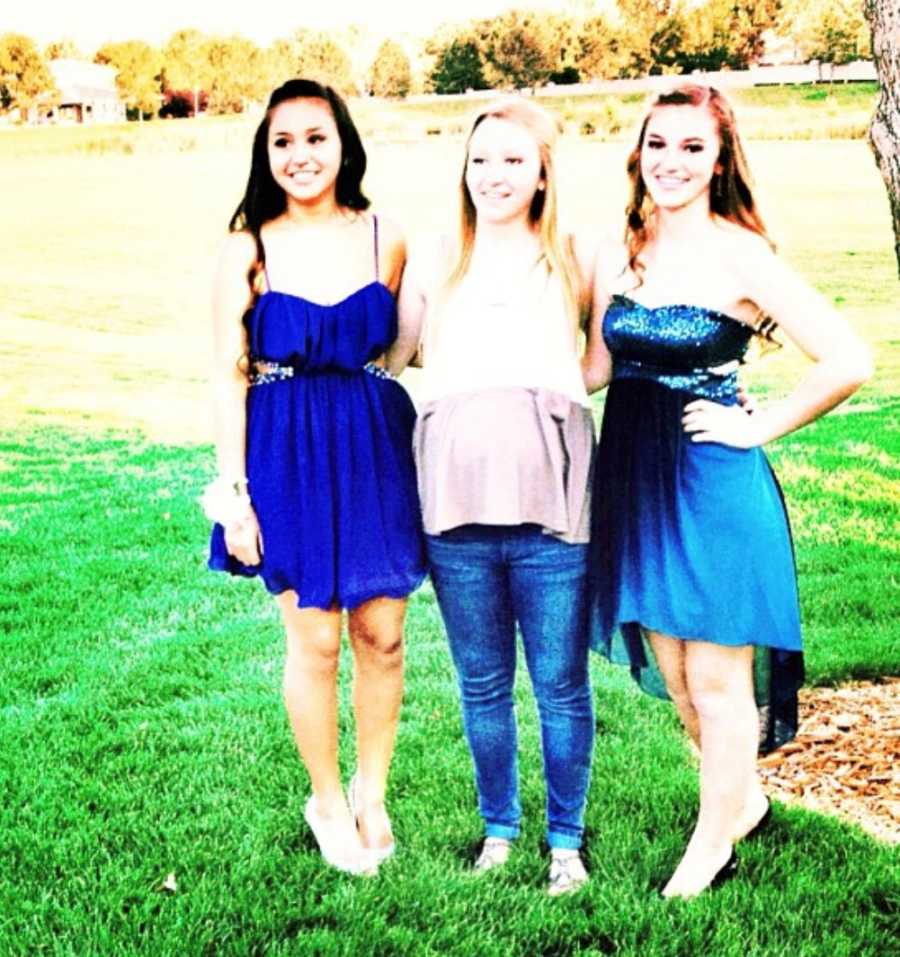 I was told by my parents if I was going to keep the baby I needed to move out. So I did. I was a junior in high school. I was living with my boyfriend’s family at the time. As word spread, I could no longer bear to go to school. I would walk through the hallways and people would mutter ‘slut’ under their breath. I lost the majority of my friends instantly. No one wanted to hang out with the pregnant girl.

I was due in November so I started taking online classes over the Summer. I was working at a fast food restaurant and trying to save up as much as I could. November 13th I gave birth to a little girl named Ella. I was absolutely terrified. The nurse in the room with me had a similar story of being a teen mom. She stayed with me the whole time. 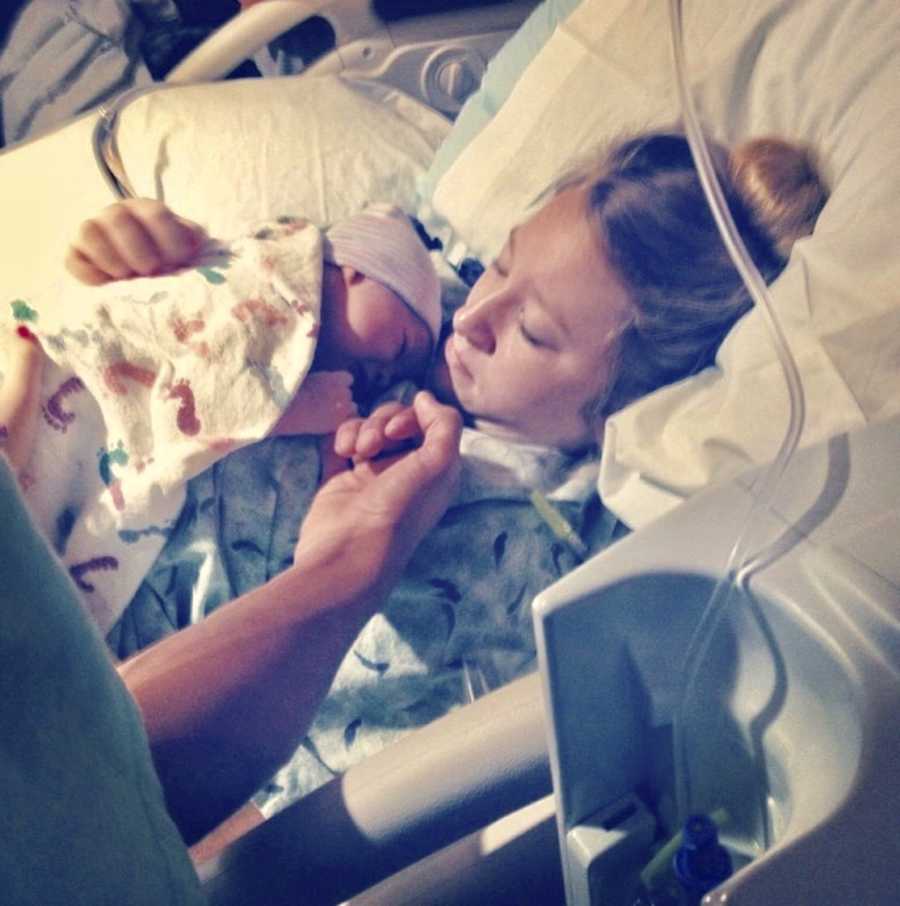 She said, ‘I see something special in you, you can do this.’ The moment she was placed on my chest, I felt complete. I realized it 40% of teen moms do not graduate high school. I was able to graduate a semester early, December of my senior year. I was the first person in my family to ever graduate. Working at the fast food restaurant. I saved up $1,000 over 6 months.

I intended to use the funds to enroll in a certified nursing assistant program, and that is exactly what I did. I wanted to have a good job so that I could pay my debts. I started working in a hospital when I was 18 years old. I worked four evenings a week as a server at a restaurant and three days a week at a hospital doing 12-hour hours. I made the decision that it was time to begin college education. 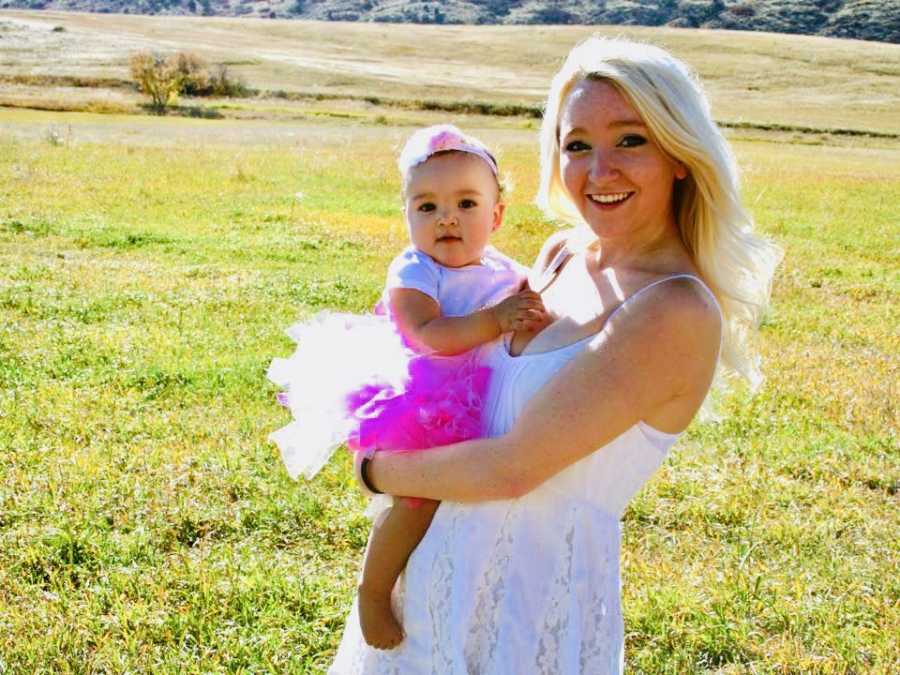 I met with the counselor and told her how badly I wanted to become a nurse. She told me, ‘Lots of people have that dream, it takes time, money and good grades. Are you sure you want to choose that pathway, especially being a teen mom?’ I knew she wasn’t wrong. I knew less than 2% of teen moms graduate college. I also knew I wanted to follow my dreams. I wanted to make my daughter proud.

did not matter what anyone else said at that point. I knew I was going to be a good mom. I knew I would give Ella the life she deserved.So I did, I started taking pre- requisites for nursing school. Nursing became my passion. Right when I started taking classes I found out Ella’s dad was cheating on me. I was mortified and I moved out on my own. My whole life turned upside down. 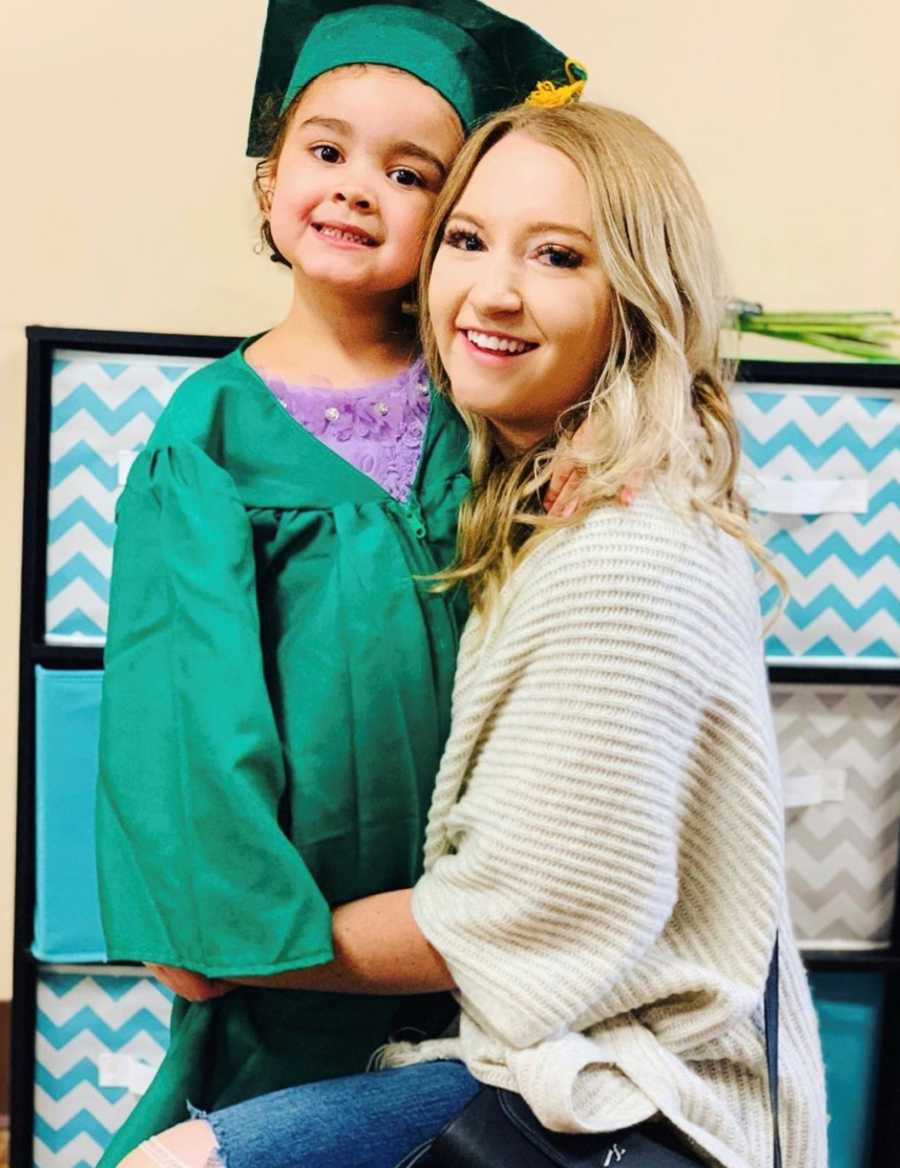 The next two years I continued waitressing and working at a hospital. I would get home from work, put Ella to bed and stay up until I couldn’t keep my eyes open to study; Every night. After applying for what felt like forever, I was offered a job at my dream hospital, working in pediatrics. I was frequently asked my age by coworkers and families I was assisting.

‘You’re still a baby, what makes you think you can take care of these babies?,’ they’d say. Little did people know, I was raising one at home as well. January of 2018 I began nursing school at 21 years old. I was not close with my mother after I had Ella. I wanted to make amends and I wanted to let her know my plan for nursing school. After a little while I asked her for help with paying for school and she told me no. 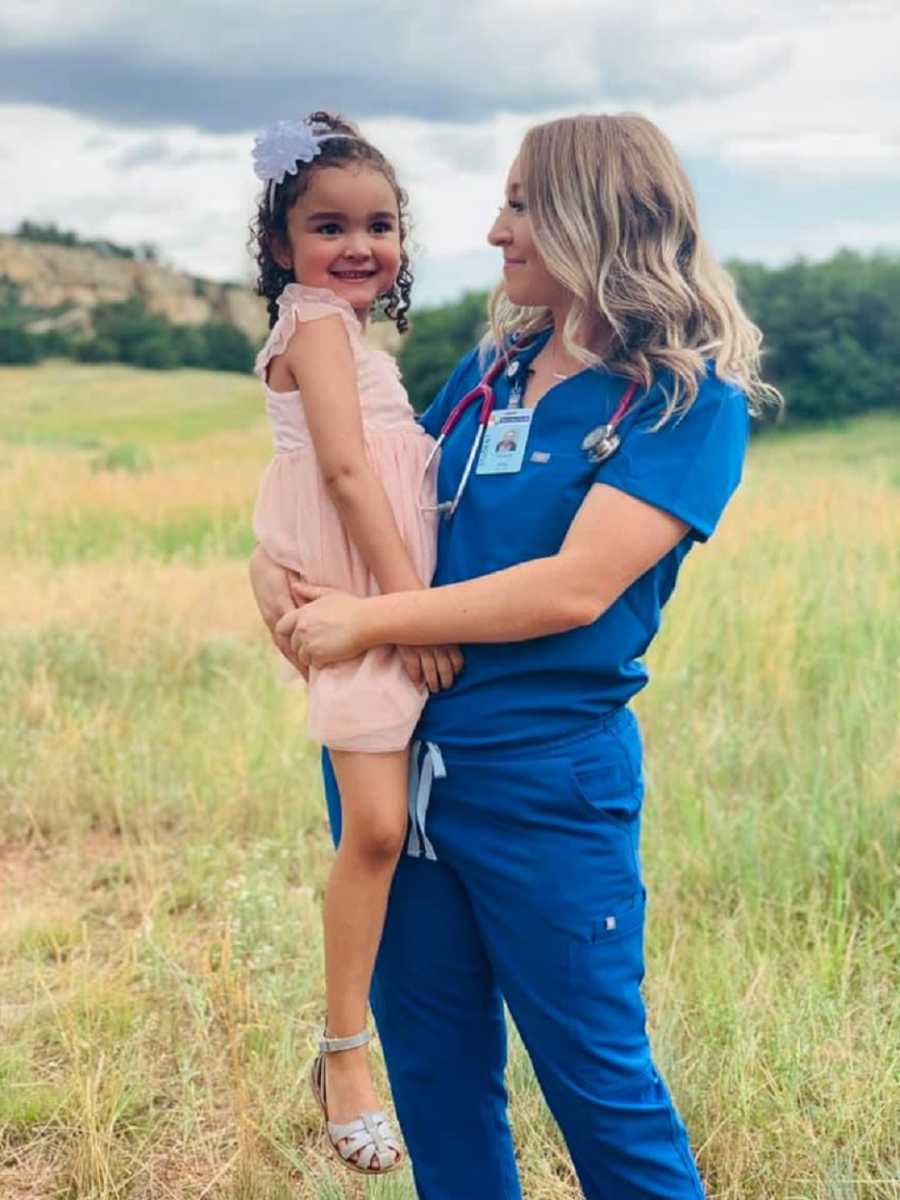 She had no interest in helping me or in me finishing school. My student loans were maxed out for the year and I was out of options. I thought I was going to have to quit. I was absolutely terrified. I reached out to whoever I could for help. My aunt fortunately was able to help me a little.A couple months into my program, everyone in my class had quit working.

Our schedule was demanding, and staying on top of it was difficult. I couldn’t afford to quit my job because I was suffering and needed money. There were evenings when I couldn’t sleep and cried because I didn’t think I could go on. So many times I considered giving up. I looked Ella in the eyes every time I had that notion and realized I couldn’t. 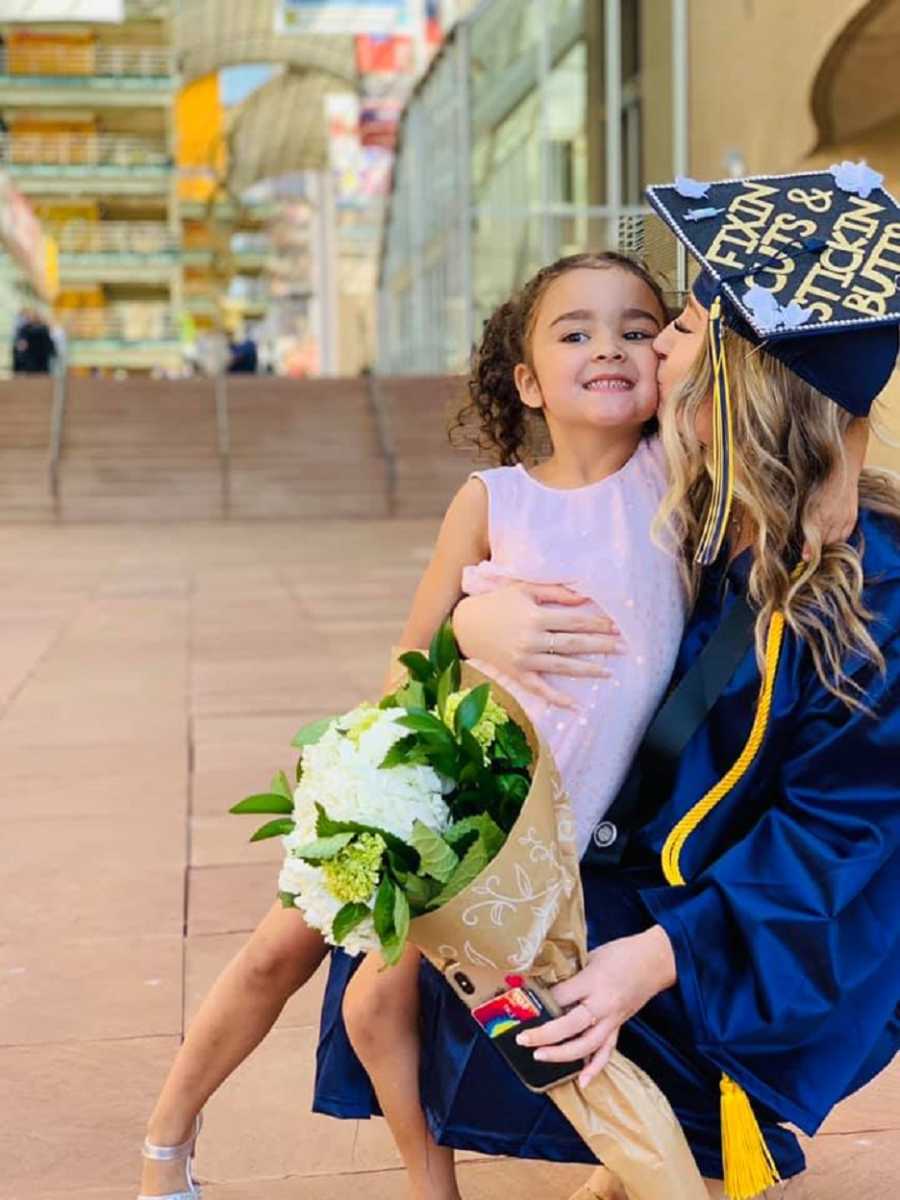 Our schedule was tight, and keeping up with it was challenging. Because I was in need of money and couldn’t afford to quit my work, I couldn’t afford to do so. I couldn’t sleep some nights and cried because I didn’t think I could go on. I was on the verge of giving up several times. Every time I had that thought, I looked Ella in the eyes and realized I couldn’t.

Being a teen mom did not define my future. It motivated me to do better, to be better. There is not a single thing I would go back and change. The tears, the lack of sleep, the endless hours of studying. For Ella I would do it all over again. I truly do not know where I would be if it weren’t for her. If you have a dream, chase it. Regardless of what people say! 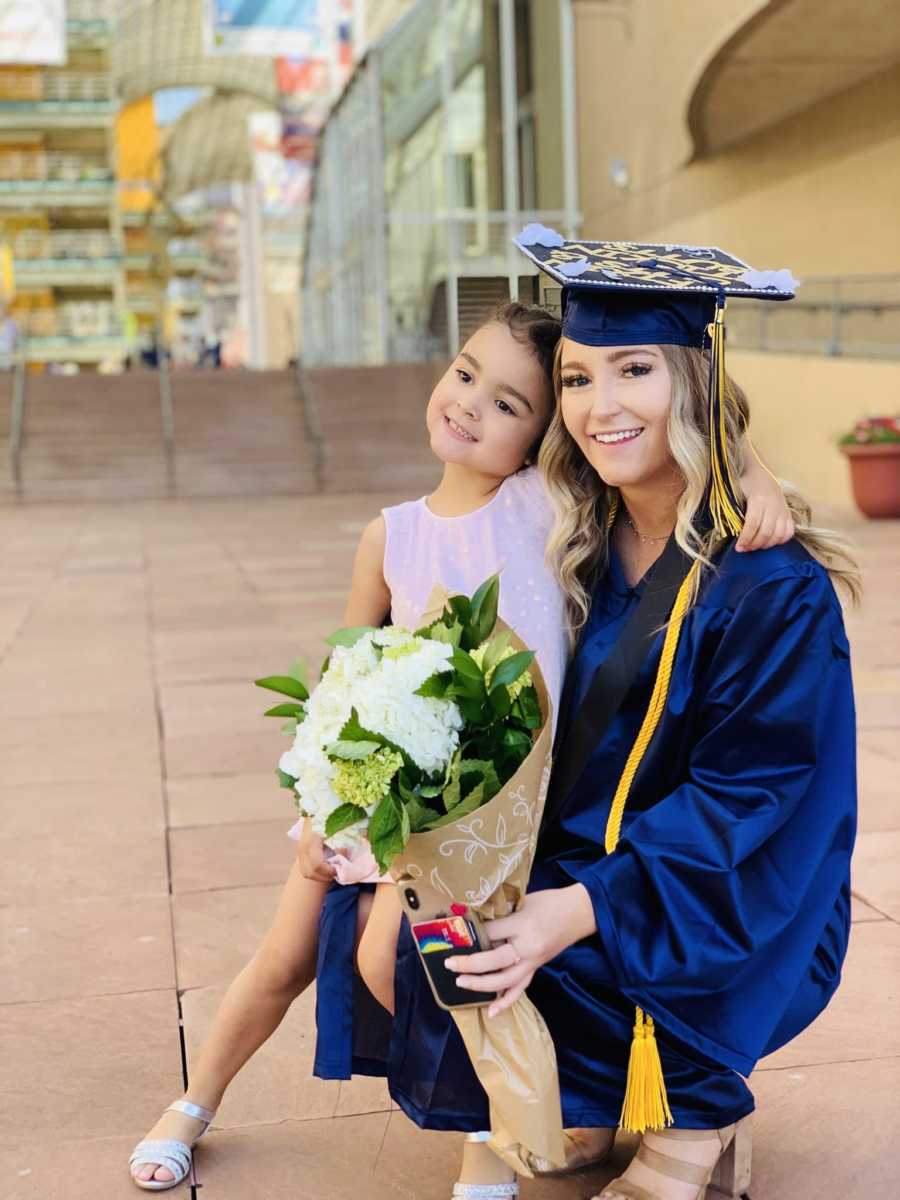 You can do whatever you want with your life. If the cards you are dealt in life are not what you want, then you have the ability to change it. Through hard work, dedication and perseverance. I want anyone who is feeling defeated and feeling lost to know they can do it. It may seem impossible now, but it will be worth it.”