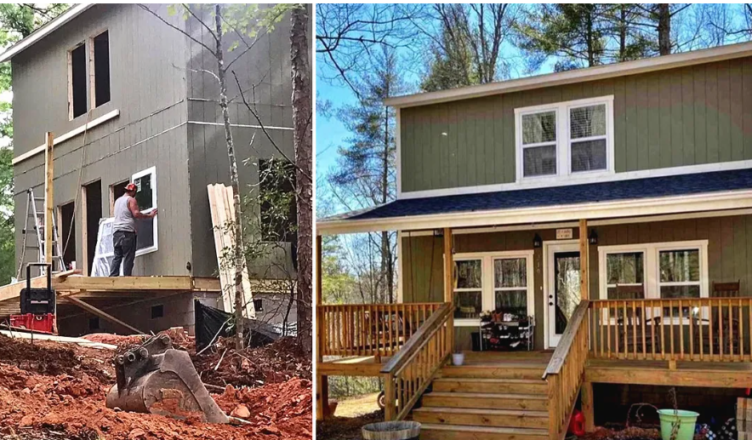 A couple who flipped a Home Depot shed and sold it for a profit before buying their dream home is inspiring many people to go debt-free. It’s an excellent debt management pathway to financial freedom. Nick and Meghan Lucido bought the shed for about $27,000 back in 2019. After renovating the structure and living in it for about a year, they sold it to a buyer who offered them so much more money than they could ever imagine!

The duo regularly posts about their home on social media, and their story went viral on TikTok. Viewers were fascinated by how they turned a shed into a working home and earned a profit from it. A few years ago, Nick and Meghan were just young professionals in Georgia who were “keeping up with the Joneses,” as Nick described it.

Their journey began when they incurred debt that they did not intend to incur. After their son was born, they decided to save money and manage their debt by selling their 2,000-square-foot home and moving into a camper van. The decision proved wise because it allowed them to pay off $82,000 in debt. They were also able to purchase a new property and begin construction on their dream home in Georgia’s mountains.

However, Nick and Meghan grew tired of living in the camper and decided to purchase and renovate a shed from Home Depot. They installed it on the eight acres of land they had purchased for their new home. When they bought it, it was just a shell, but the couple did everything they could to make it a comfortable home. “We bought our code book, met with local code enforcement, and did everything that was required to convert that into a home,” Nick explained.

During the home’s renovation, Nick served as the general contractor. The couple used YouTube videos to convert the shed into a two-story, 860-square-foot home. It has a single bedroom, a deck, and functional plumbing. “It was very radical and extreme,” Nick admitted, “but we wouldn’t have it any other way.” The Lucidos spent around $60,000 to convert the shed into a livable home.

“A house is really just a place where you can lay your head at night and rest and replenish yourself.” We didn’t spend much time inside. “You have some freedom to do whatever you want when you have eight acres in the middle of the woods,” Nick explained. Originally, the couple intended to live in the shed while constructing their new home on the same property.

However, when the pandemic hit and home prices increased across the country, they saw an opportunity to sell. “We had a lot of people tell us we should Airbnb it out. It was kind of like, ‘Let’s just list it and see what happens.’ And we got a lot of hits on it. It was like, ‘Oh, maybe people do like this,’” Meghan said. During the pandemic, many Americans decided to leave cities and explore more suburban or rural areas.

“I think it was an ideal space and with the market the way it was at the time, people were escaping Atlanta and the metro area and people wanted a little privacy and seclusion and I think that property delivered a lot,” Nick said. Nick and Meghan sold the renovated home for $312,000 in April 2021 and made about $225,000 in profit, which they used to build their new home on another plot of land.

They moved into an apartment while it was under construction.“There’s so much to unpack in this story, and I think our story is not unique in the sense that people are hurting,” Nick said. “People are burdened by debt and the everyday weight of life. So, I think our debt story, how we were probably one of the very, very few to sell pretty much everything we own – including the furniture, I mean, we sold everything.

I think there’s a little inspiration there that there’s light at the end of the path.”Nick and Meghan’s only regret is not having it done sooner. “The ability to pay off everything, move into a camper, and literally be debt-free was most the freeing experience that I think anyone can ever experience,” Nick told the New York Post.

While they are happily moved into their new fully-custom-built two-story home with an open porch, the couple isn’t closing their doors on flipping a home again. What do you think of this debt management strategy? See video below.