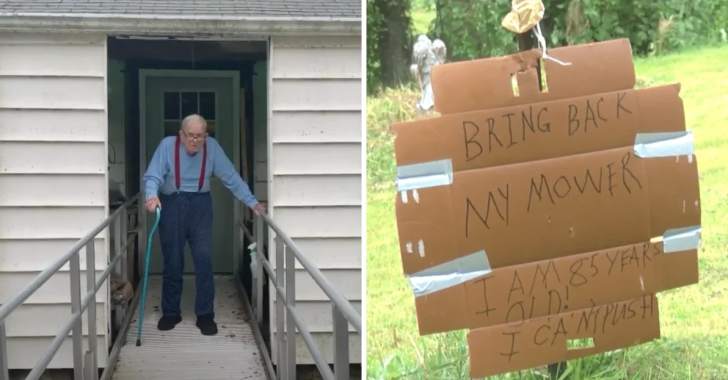 When something is taken away, there is usually something better as a substitute. Gordon Blakeslee, 85, owns a home in Harpursville, New York. But due to the pandemic, he had to stay with his family during the confinement, leaving behind his beloved craftsman from 2009 riding a lawnmower. He returned home to find that his lawnmower had been stolen from his yard while he was away!

Gordon likes to take care of his garden, but he cannot use a manual lawnmower when he is older, and he does not like to depend on others to do this work for him. Gordon tried to write on a sign: “Get my lawnmower back. I’m 85 years old and I can’t push it.” On the lawn in front of his house, he hoped the thief could see him and take pity on him.

Someone saw Gordon’s story on the local news and decided to buy him a brand new one that is way better than his old riding mower.The anonymous stranger had the Broome County Sheriff’s Office deliver the new mower to Gordon. The old man said, “Thank you, what else can I say. I really appreciate it.

It’s got some new upgrades to it; that’s a lot better than my old one.”Gordon now keeps his new mower locked up on his property and had security cameras installed. He doesn’t want to risk his new toy getting stolen.