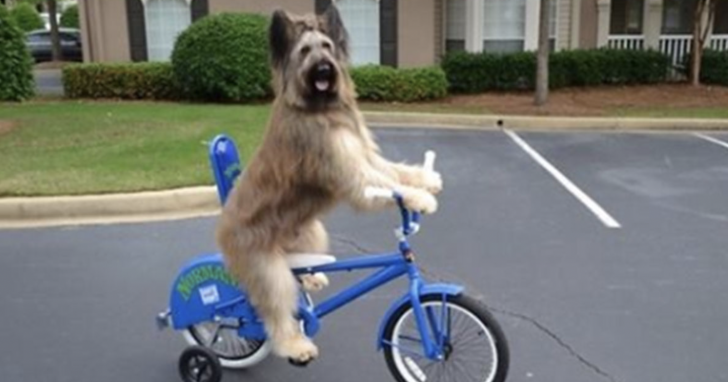 Every dog brings something unique to the table, but one thing they all have in common is intelligence. Some dogs compete in reality shows such as “America’s Got Talent,” others in dog shows, and some even go viral!

Dogs are thought to be so versatile because they are capable of learning amazing skills! They can perform amazing tricks that people will pay to see, and some of them will leave you speechless. The dog in the video below performs one of the best tricks we’ve ever seen! Yes, it is breathtaking. 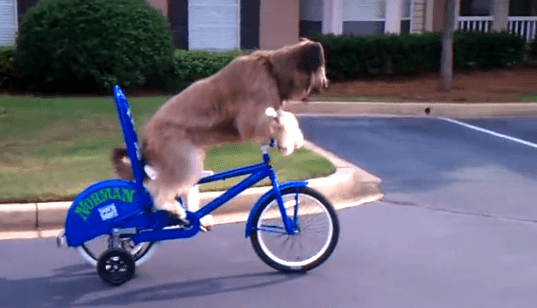 What makes Norman an even more special dog is that he’s a cancer survivor! In June he was diagnosed with cancer, specifically stage 4 lymphoma. However, they caught cancer just in time and he went through surgery; the pup is now recovering. We couldn’t be happier to hear this good news. and now he’s kicking butt as he rides a bike.

The clip begins with Norman running up to the bike. Then, to everyone’s amazement, he quickly gets on it all by himself! A woman is helping him only by holding the bike steady, but he does the rest himself. His paws automatically go to the pedals, and the woman helps him adjust one because it kept slipping.

On his branded bike (his name is on it), he’s ready to take off. His human friend holds up a treat for Norman, and he stands up straight meaning to eat the snack. Instead of giving it to him, she begins to walk backward, and Norman begins pedaling! It’s crazy, he’s like a human on a bike.

As he rides forward, following the woman, he doesn’t mess up once. She stands on the other end yelling words of encouragement for Norman to keep pedaling. His paws never slip down, and he rides the bike perfectly until he finally reaches his final destination.

The woman cheers for him and gives him his treat. He jumps off the bike, where he’s rewarded with cuddles! watch Norman the Scooter Dog ride a bike by himself, click the video down below!