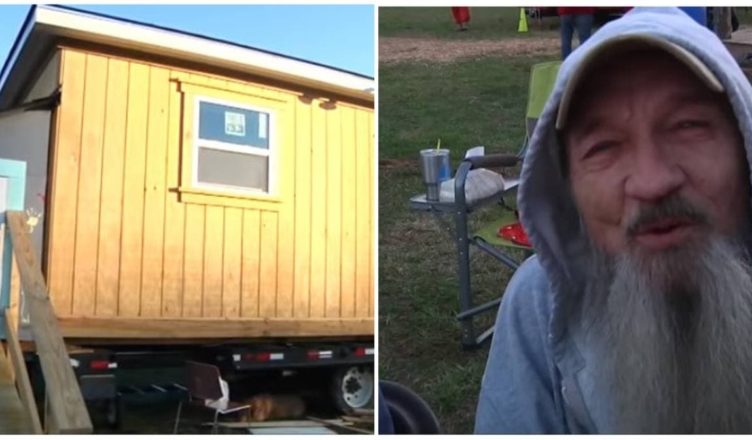 It’s difficult to live without a comfortable home, but this couple was given a really beautiful home thanks to some generous youngsters. Veterans have sacrificed a great deal for their country, yet they are rarely adequately compensated for their efforts.

Thankfully, their circumstances can improve, and when it does, we can’t help but smile pleasantly. Eddie Browning, a Navy veteran, and his wife Cindy were in severe need of a decent home to reside.  They owned a camper, but it was in bad shape and needed extensive repairs!! The place required the type of tuning up that the couple just couldn’t afford. As a result, they were exposed to the elements, especially during the winter. While speaking to FOX 5 Atlanta, Eddie said he and his wife had been freezing to death for a long time.

But a group of students from Elm Street Elementary in Rome, Georgia, became the answer to their prayers! These young students had decided to build a tiny house for a homeless veteran but their project hit a roadblock when they couldn’t find a legal location to put the home. Upon hearing what the children were planning, the organizers of the Georgia Tiny House Festival at Ooh La La Lavender Farms decided to help. They allowed the kids to store the house on their farm.

The children had initially planned on building a four-foot by eight-foot tiny house, which they hoped to fill with sleeping bags, a propane heater, and other supplies. They didn’t have the capability to include plumbing and electricity, but once more people heard about the children’s plans and why they were doing it, volunteers and corporate sponsors offered their support. Everyone came together and they were able to create a larger extension for the tiny house.

This home came with electricity, plumbing, and other amenities to make it a comfortable place to live. The Brownings visited the field where the tiny homes were displayed believing they were just checking out the place so they were shocked when they were told that one of the houses was theirs.

Eddie said: The couple was incredibly grateful to the students who got the ball rolling and made their dream a reality. It just goes to show that sometimes all you need to do is to offer the little you have and you might end up changing lives.