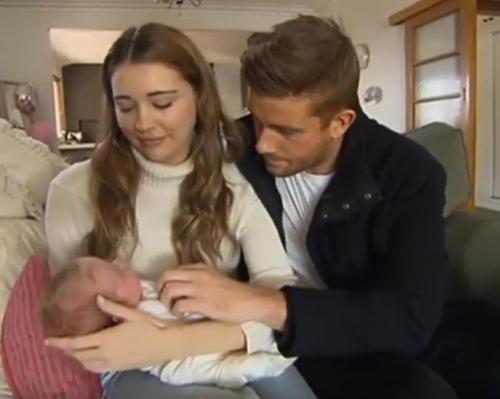 A Melbourne model who had no idea she was pregnant gave birth to a healthy baby girl on a bathroom floor. Erin Langmaid, suddenly became a mother two weeks ago when she unexpectedly welcomed daughter Isla to the world, despite showing no signs of pregnancy. The size 8 model had been working full time and taking contraceptive injections in the lead up to the birth!

She had no symptoms of pregnancy, such as nausea, a baby bump, or food cravings, and only felt sick on the day Isla was delivered. Langmaid let out a loud scream, which alarmed her lover, Daniel Carty, who dashed through the bathroom door. She gave birth to a healthy baby girl weighing 7 pounds, 7 ounces after an incredibly difficult 10 minutes.

In an interview with The Sun, Langmaid stated, “It was the biggest shock of my life.” In the days leading up to the birth, Ms. Langmaid could still fit into all of her outfits. The Australian couple was utterly taken aback by the unexpected birth.

Carty later revealed that he had to call the emergency services after his daughter was found unresponsive. Miraculously, the dispatcher’s concise instructions had helped Carty save his precious newborn in time.

After receiving a check-up, Langmaid had found out that she was exactly 37-weeks pregnant on the day she gave birth. The excited pair recently announced that they’ve named their daughter, Isla.