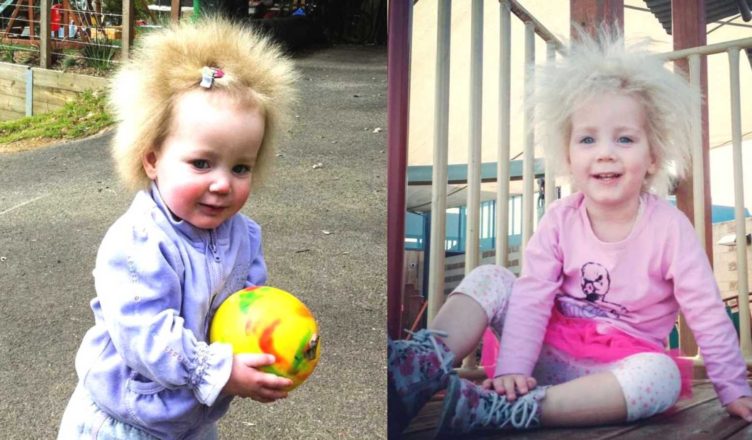 “Shilah was born just like any other little girl. The pregnancy was perfectly normal, and she was born at 36 weeks. We were so excited to add a little girl to our family and her big brother Taelan was possibly even more excited. Shilah was born with soft brown hair just like her brother. But as it began to fall out, it was replaced with blonde locks just like my own hair!

She was picture perfect, blonde hair, blue eyes, so cliché. But at around 3-6 months of age we noticed something different. Her hair was growing straight up and not flattening down. It was super soft and almost glistened in the light. Others started to comment which made us even more inquisitive as to why and what was happening. ‘What’s wrong with her hair?’ they would say. It was hurtful and sometimes quite rude, but I’msure they were just being ignorant and insensitive. 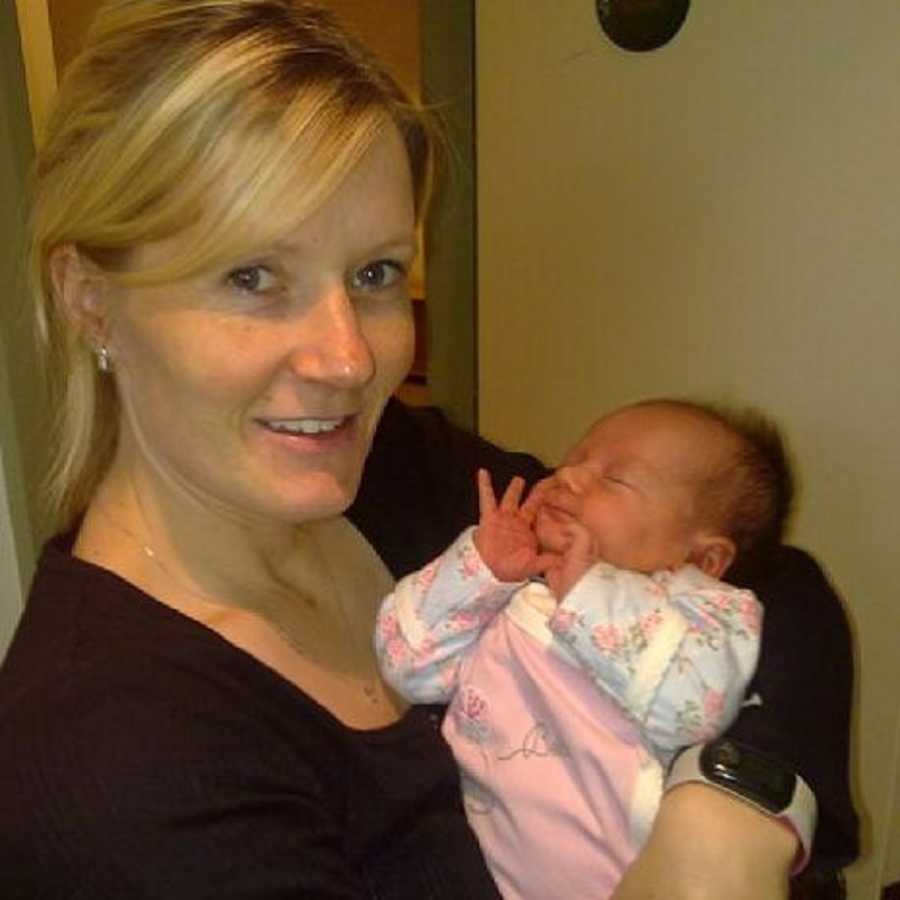 Then there were the people who were complete strangers that would peer into her stroller, stare at her and make comments about her everywhere we went. ‘Looks like she stuck her finger in the power socket,’ was a frequent comment. Often people would even ask to touch her hair or just come up out of the blue and touch her hair. As a parent, this would really annoy me and my husband, and we would often make it known that it was not okay. ‘Do you mind? She is just a baby and we don’t go around touching your kids.’

The worst was possible people who would take pictures of Shi without even asking, and then try to pretend they weren’t when caught. I remember my husband asking many a time for people to delete what they had taken. Honestly, we lost count of the number of people who would ask about her hair and we didn’t know what to tell them as we had no idea. Everyone would give us advice on what to do but nothing worked. It just kept growing straight up. Whatever we did would not make a difference. I remember one lady told us to ‘shave her head so it could grow back normal.’ 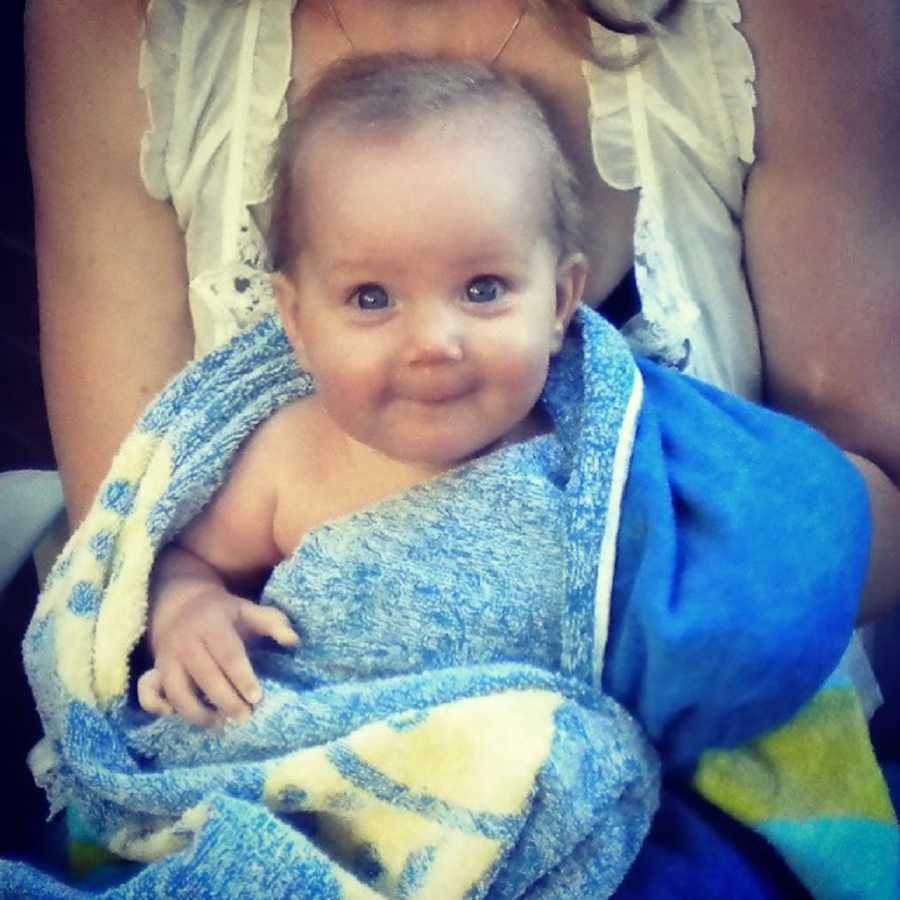 We just assumed it was a gene from our family history and that was just that. So, we told people that perhaps it was a throwback to one of our family histories and people were okay with this explanation. Or I just said she was ‘blessed with her hair and born to be noticed.’ That was easier for kids to understand.

Shi’s hair grew longer as she grew older, but it never went over a specific length. Instead, it would just snap off at the root, appearing to be rather frail. The tangles and knots were a daily battle. If you tried to brush them out, she’d lose a lot of hair just brushing them out. She has spent many hours in tears attempting to resolve the overnight dreads, therefore she now sleeps on a pure silk pillowcase, which has made a significant difference for her. 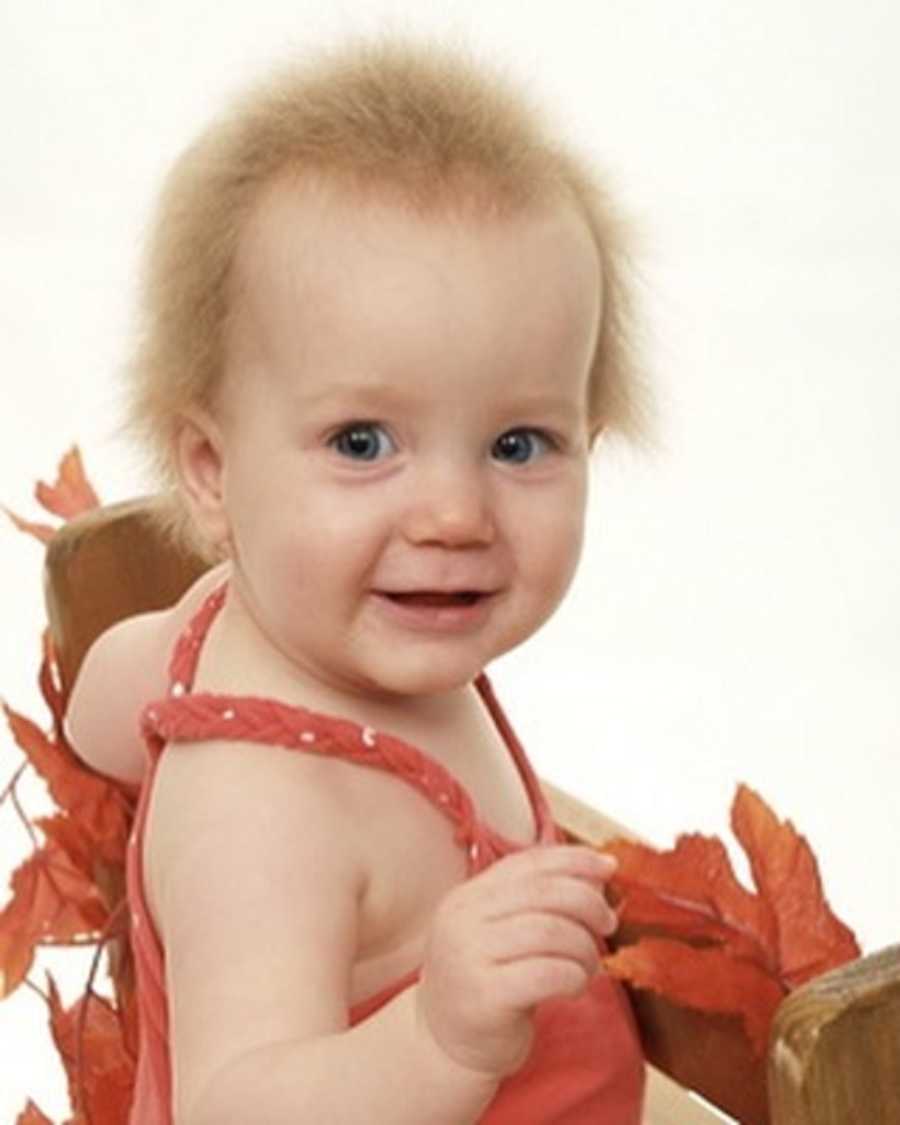 Although her hair has never gotten any longer and still remains quite short at the back from wearing on her pillow each night, she is able to pull it back into a little top-notch and wear clips to keep it out of her eyes. It just seems to be much more fluffy and thicker.I remember one day a stranger likened her to Doc Brown from Back to the Future as she was wearing a lab coat. ‘Your daughter looks just like Doc Brown, the guy in the movie. The crazy scientist guy!’ Others often said she had ‘hair like Albert Einstein.’

They were spot on and it did become a bit of an in-house giggle for us. She did have that crazy wispy hair-like Doc and Einstein but probably not what any little girl wanted to be likened to. Luckily Shi embraced her appearance from a young age. She had never known any differently. She’d make sweet remarks like, ‘Just call me fuzzy. Some days I look like a lion with a crazy mane.’ Both Shi and her brother Taelan were in childcare when I returned to work, which I think really helped. 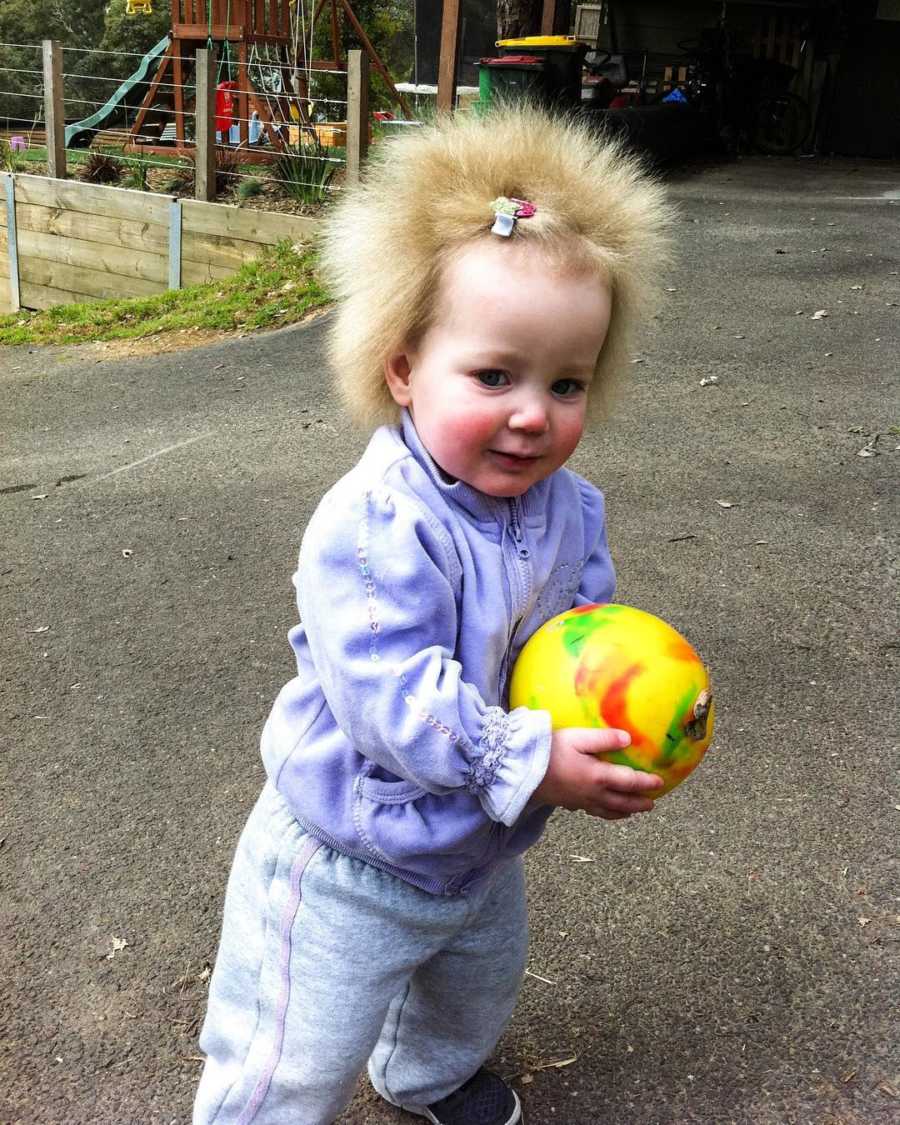 Kids truly do just say what they are thinking, and this helped shape and strengthen Shi. She was confident and sassy and quickly learned how to work her uniqueness to her benefit. She would tell them she was ‘magical and special’ and they were just ‘normal and boring.’At times it was difficult for Shi as she dreamed of having long hair like everyone else and just wanted a ponytail.

So, one day around age 4 she decided to cut her own hair. She cut off all the hair at the front that had not reached into her pony tail. We were devastated as we knew her hair did not grow very fast and she was even more upset that it was now spiked straight up and could not be clipped. She wrapped a piece of material around her head like a scarf for a week so people couldn’t see what she had done. 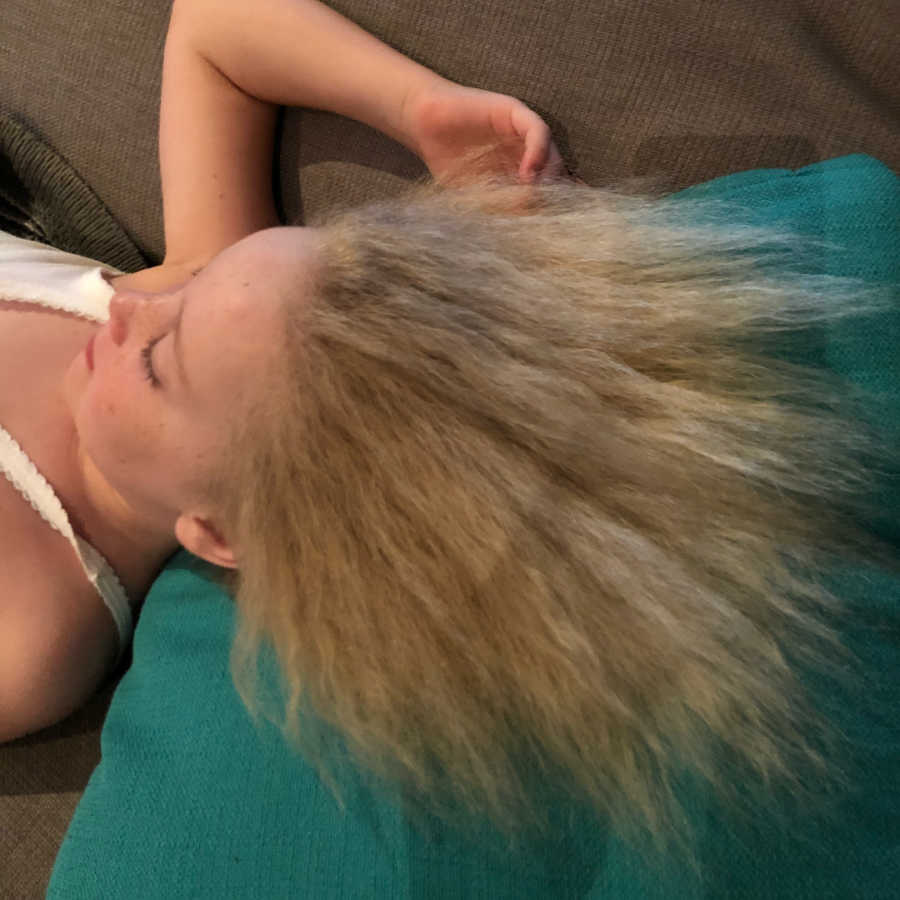 When Shi first watched Disney’s ‘Frozen’ she was really upset that her hair did not look like Elsa’s and she couldn’t wear her hair in a long braid. I remember quickly telling her that ‘her hair was more like Rapunzel as it is truly magical.’ It was from that day that we taught Shi to love her uniqueness and never worry about what others say to her. Building her self-esteem and her confidence was a big deal in our house. Her brother would often be her support when she needed it and when kids gave her a hard time.

Starting school was scary for us as parents. How is the school yard going to receive her? What are they going to say to her? Is she going to make any friends? All of which were quickly answered – she was extremely popular with all the kids from prep to grade 6! Shi was quite the little celebrity and she lapped up all the attention. 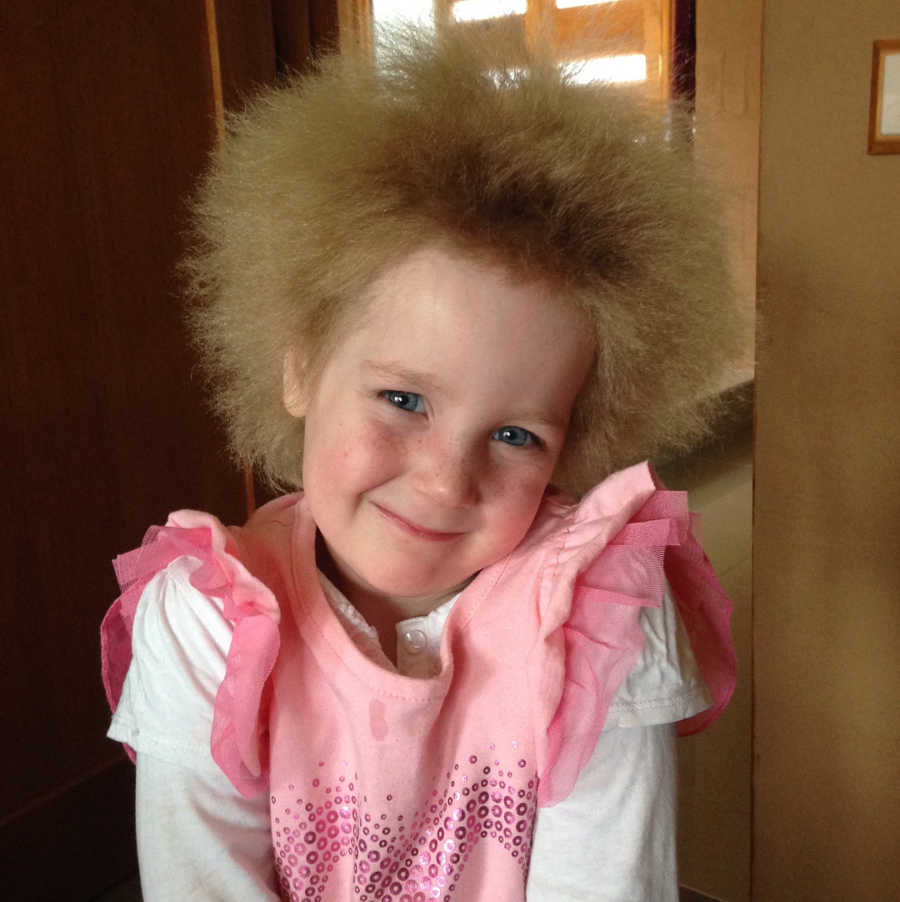 Shi asked to get her hair done at the hairdressers one day so we took her. The lady was more baffled and with 20 years experience, had never seen blonde hair like it. She didn’t know how to cut it as it was so fluffy and sticking straight out. She offered to straighten it, but her hair was more newborn-like than anything and the heat would burn it.

After several hairdressers touching and playing with her hair, one of the ladies suggested we go to an African Salon as they would be better experienced with hair like Shi’s. So, from that day forth that is where we go when Shi would like her hair braided or styled. Although her hair is nothing like African hair the ladies love playing with it and styling it in the most creative cornrows for her every now and then. 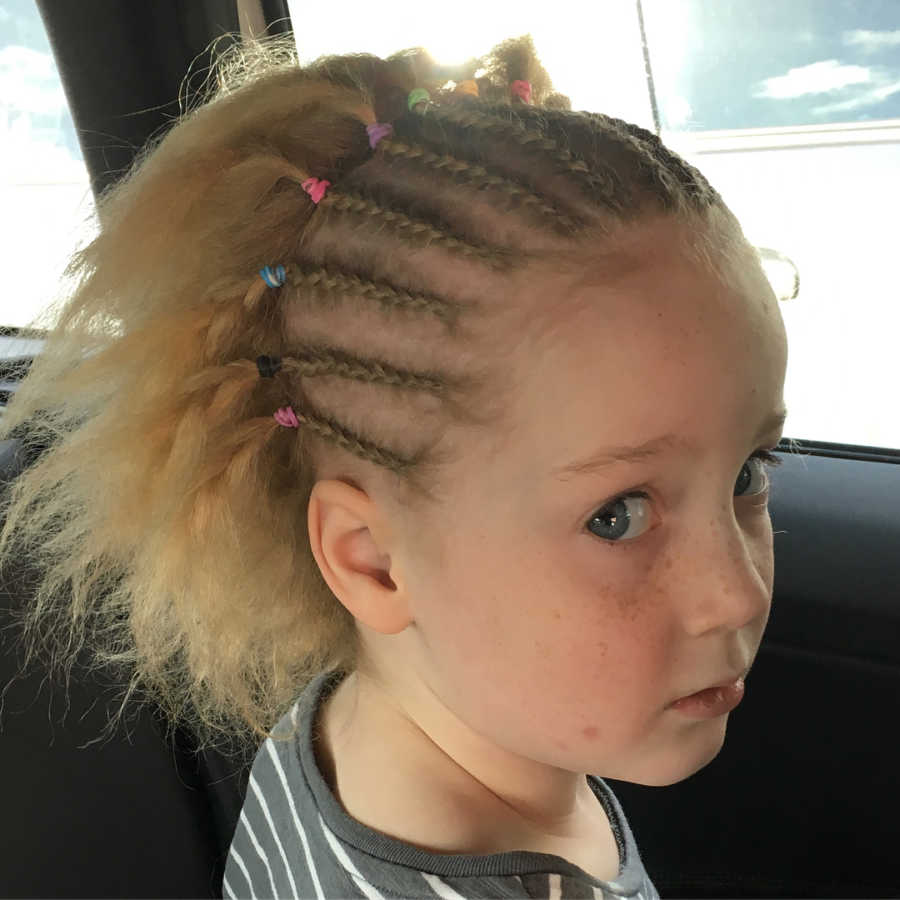 Shi’s hair isn’t coarse; it’s incredibly soft and fluffy, and it doesn’t get oily. She doesn’t require oils or leave-in conditioners; all she needs are really gentle natural products and a decent detangler. Shi has only had one and a half haircuts in her life. One to repair the part she’d already broken! It simply does not extend beyond her existing length.

People constantly suggested that we take her to the doctor to find out why her hair was falling out, but we saw no reason because she was healthy. It was only her hair, and it was only Shilah. However, while Shi was in the hospital for her teeth, the doctor who was care for her asked us a question.

‘Are you aware of Uncombable Hair Syndrome?’ I had never heard of it before and was a little confused. The doctor explained that UHS was caused by a gene mutation and it involves silvery blonde or straw-colored hair that stands up from the scalp and can’t be combed flat. The doctor had researched UHS but have never met a child with the condition. I was shocked, teary and excited all at the same time, finally a possible answer to all those years of questions. The doctor was just as excited. 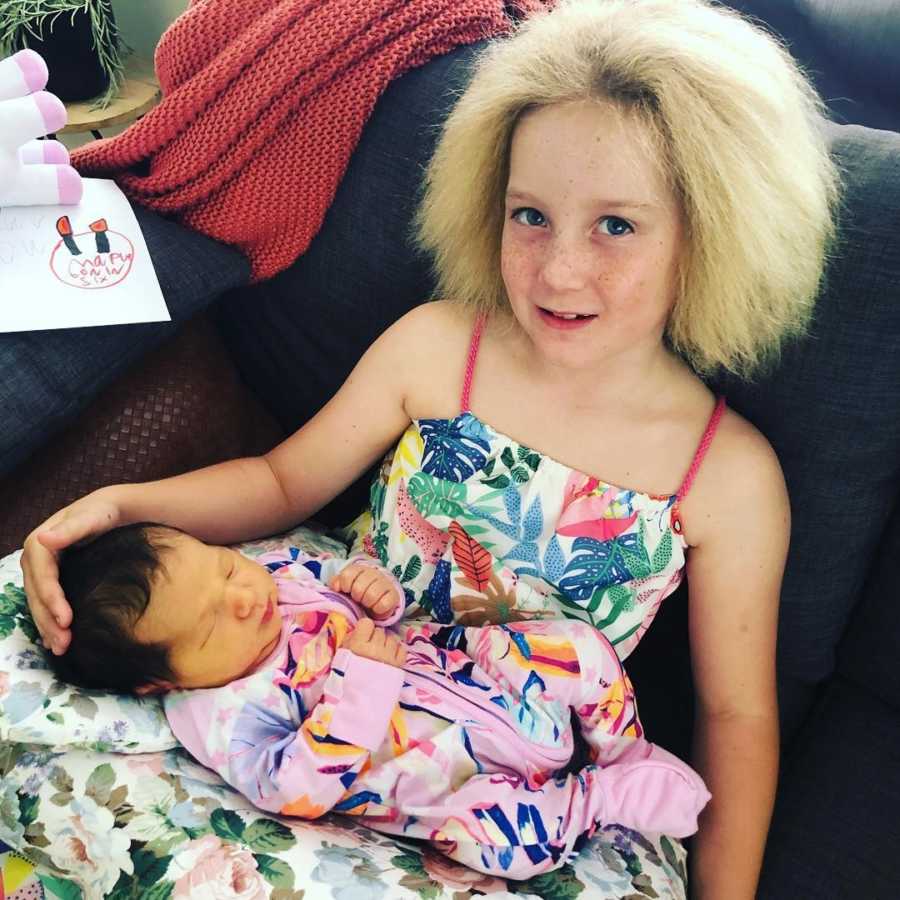 The doctor then with our permission checked over Shilah to confirm there weren’t any other symptoms that are often found in children with UHS. We now know Shi’s teeth do have weakened enamel and break easily but other than 100% hair coverage, she is perfectly healthy. What it means is that every hair on Shi’s head grows differently than ours. It’s slightly heart-shaped and is missing a protein which is why it grows straight out and looks kind of frizzy/kinky.

We were so happy to have an answer, but it was now time to share with everyone to make a difference and to help others around the world. But first things first, we had to tell our parents why our little girl truly was so special – maybe only 1 of 100 people in the world special.Shi loves to be the center of attention and taking selfies so we decided to give modeling a try, but companies were too worried about her uniqueness and taking away from their brand, so it didn’t work out. ‘She is just gorgeous, but her look is very unique, and the brand may not be able to be memorable for the product.’ 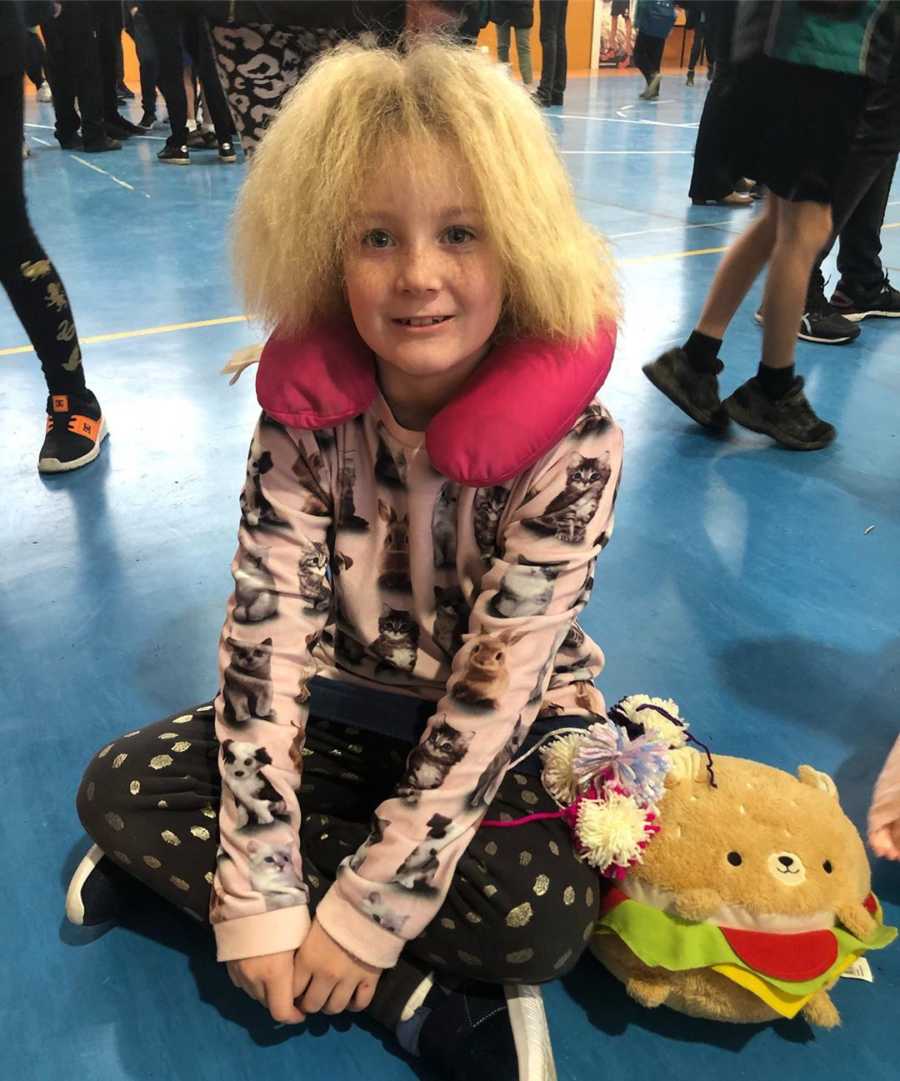 We then decided to put a little more time and effort into an Instagram page @shilahmadisonn that Shilah when she’s old enough can take ownership of. Through Instagram, we have reached people all over the world and have made a serious difference in other families who were searching for answers just like we had. People are constantly reaching out for advice and sending photos of their kids in the hope that they too may have found the answer. This is truly humbling.

We have connected with kids and adults just like Shi who have or were going through the same things she was, they look up to her and her positive attitude about being different and special and how she, as a little girl, takes on the world around her. It is a powerful tool and has meant the world to us to show Shilah the support that is out there and to make a difference for someone else with Uncombable Hair Syndrome. 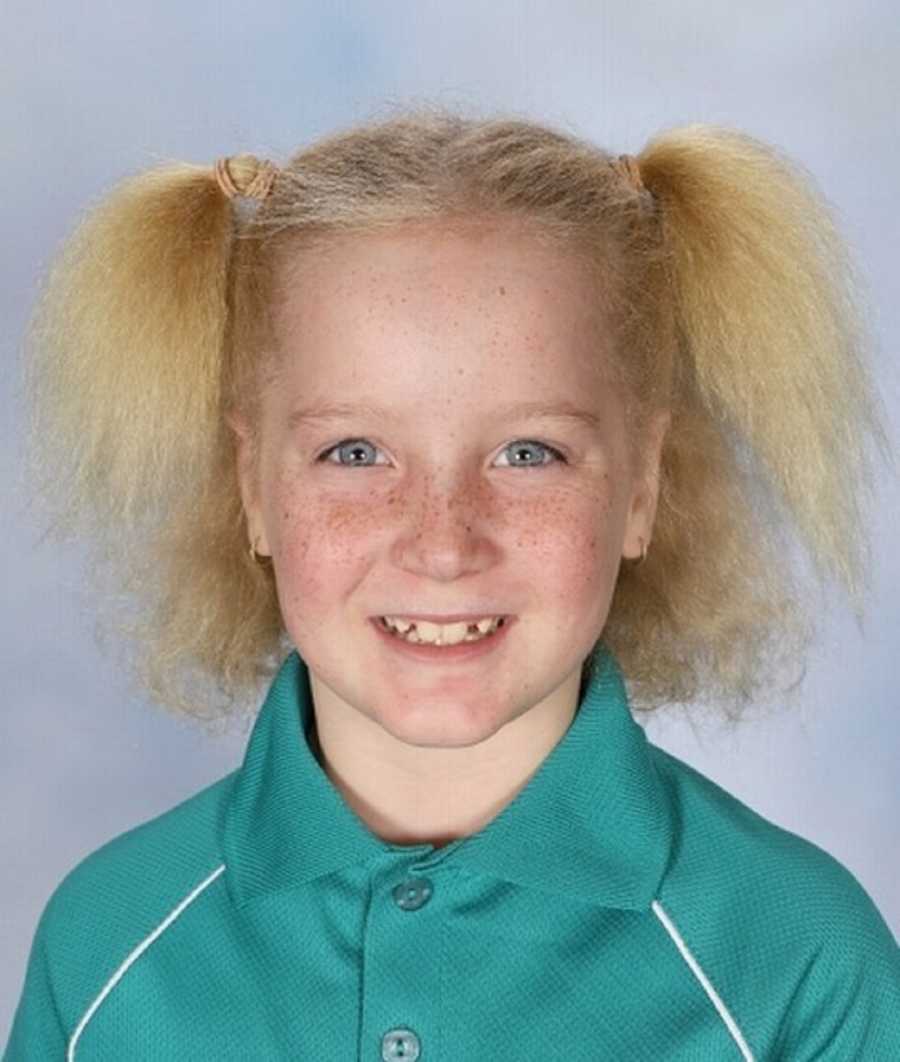 ‘There is nothing wrong with being different. If other people stare, it’s because they’re jealous,’ Shilah encourages the others.Comments have been both supportive and ugly at times, but it is an amazing platform to connect with those who want who support her, or somewhere they can say to their little one, ‘Look, you’re not alone. You’re not the only one and look at how this little girl rocks it!’

Shilah chooses her photos and what she wants to share with others; she frequently writes back to those who contact her, and she enjoys responding to all of the attention she has received. Shi has a few of pen pals and frequently receives thank-you letters and postcards from all around the world. 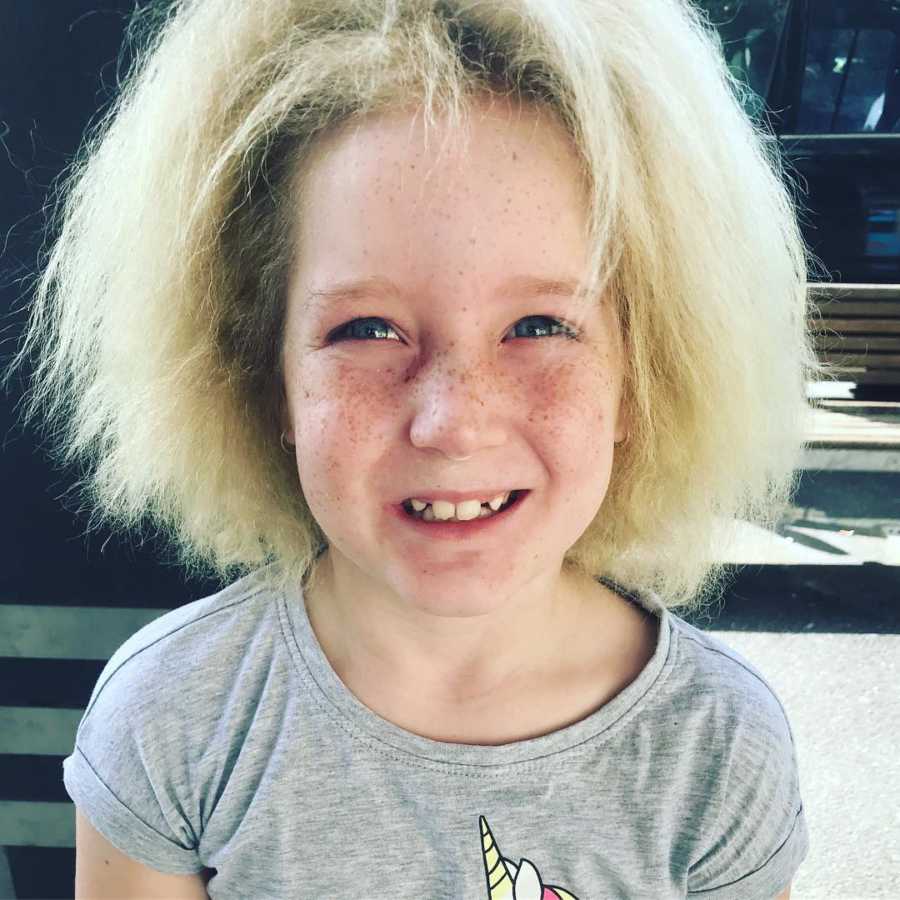 As a family, we wouldn’t change her for the world. We see big things in her future. She has the spunk, the sass and the personality to make a difference. I would be fibbing if I said it’s been easy for her, but if anyone could own the way they look and deal with the comments and stares – she certainly has. ‘You just have to love yourself, mom. Who cares about everyone else?’, she recently told me.

She is our inspiration!!!”