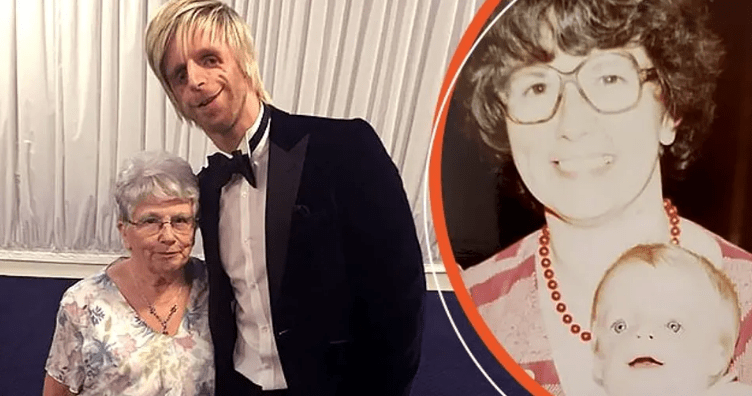 A baby boy who was abandoned by his biological parents because of his appearance was then taken in by a kind woman. She had been contacted by the Social Services and after she saw the baby, she asked, “When can I take him home?”

Parents are known for loving their kids unconditionally, but this doesn’t hold true for this baby. He was abandoned by his parents only 36 hours after his birth because of health issues!

The tiny fragile baby boy named Jono Lancaster was left all alone, without the love and protection of his parents. Jono Lancaster told NORD Breakthrough Summit:

“I was born with a genetic condition that affects my facial features. I have no cheekbones, and so my eyes dip down. I love my little ears, they don’t get cold at night. But I do need hearing aids.”

TCS can impact the development of facial bone tissues, jaws, cheekbones, and chin. About half of the people suffering from this disorder have a hearing impairment, including Lancaster, who was born in 1985.

After that, the hospital personnel contacted Social Services, who found him a caring woman named Jean to care for him. The woman did not flee or get afraid when she first saw Lancaster. Instead, she asked the nurse, “When can I take him home?”

Lancaster finally discovered a mother’s warm embrace at that point. Jean began to look after Lancaster, providing him all the care, love, and support he required. Finally, on May 18, 1990, Jean became his legal guardian.

This woman attempted to contact his parents for five years in a row but received no response. Lancaster’s home and his mother’s presence were the only places where he felt loved as a child. To him, the outer world was harsh and dangerous.

Lancaster grew up while hating himself with all his heart. He avoided seeing himself in the mirror because of the fact that his reflection scared him. He was ashamed of his appearance and finally, he began understanding why he creeped out everyone.

Gradually, he changed the way to look at things. In 2015, he met his partner, Laura, in the gym while he was working as a fitness trainer. Both worked together on spreading positivity and smiles around them.

Sadly, Lancaster’s parents still didn’t want to do anything with him. Regardless, he decided to keep going and began focusing on his ambitions, dreams, and goals. Ultimately, he became much more than a guy with TCS.

Since then, he has devoted himself to spreading awareness and assisting those with various disabilities. Lancaster began to work on himself rather than trying to change people’s perceptions of him.

He suffered for more than two decades as a result of how people mocked him and ignored him. Lancaster gradually transformed his mentality, realizing his inner value and potential, thanks to the support of his loved ones.