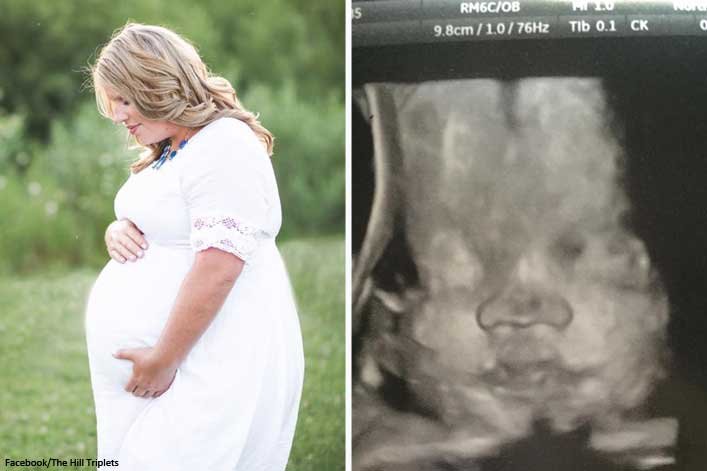 The moments in life that are equally bursting with joy and grief are few and far between, but that’s exactly what happened to Courtney Hill. Courtney and her husband Brian met in the middle of a snowstorm in 2011 at Timothy O’Toole’s in Gurney, Illinois. The chance encounter soon blossomed into an unforgettable romance that led to their five-year marriage and the birth of a beautiful child!

However, their “till death do us part” came much too soon for Courtney when she learned that her husband died in a tragic Oklahoma trucking accident on February 2, 2016. The retired Navy Veteran had served in Iraq, Kuwait, and Afghanistan. The couple had been trying to grow their family for some time. On the morning of the accident, Brian and Courtney took a pregnancy test together, but the result was negative.

Days later, on the morning of her husband’s wake, Courtney took another pregnancy test. This time, it was positive. Mourning the loss of her husband, she yet felt an unusual and unexpected excitement about what was still to come—his legacy that he had left with her. At the funeral, just before Brian was laid to rest, Courtney grabbed his lifeless hand and whispered the news in his ear. They were going to have a baby—or so she thought.

On March 2, exactly one month after Brian’s death, Courtney’s mother took her to the hospital after she feared she might be having a miscarriage. The news was just the opposite. At the hospital, Courtney learned she was having TRIPLETS! “My jaw DROPPED,” shared the stunned mother. “I’m excited to have three more smiles that remind me of him.”

Her happiness was short-lived, however, when her father-in-law died. Courtney and Brian had been living in Texas to help his father, who was ill. Courtney returned to Illinois after his death to be closer to her family. Courtney and her sister spent hours decorating the triplets’ nursery as the due date for her three tiny blessings approached. In honor of their great father, it was Navy-themed.

2016 wasn’t done with Courtney yet. At her 25-week appointment, doctors told her that she had lost one of the triplets. Her son Brady, no longer had a heartbeat. Courtney said the news was completely unexpected; up until then, Brady had been totally healthy. “It caught me off guard. I wasn’t expecting to hear that news at the ultrasound. It reminded me of the loss of my husband, with his loss came blessings. I lost Brady but I was given two newborn babies who are healthy.

Most triplets have weeks in intensive care. Not in my case, everybody went home the next day. We have suffered, but we also have been blessed with little miracles.” Courtney gave birth to Harper and Miles, her two surviving miracles on September 21. She says the most difficult thing she’s had to face since the babies were born is explaining Brady because strangers often ask if the babies are twins.

“People jump to the conclusion that they are twins. I call them surviving triplets. Many people get it, but others don’t. I don’t expect people to know my story, that I had three heartbeats for 26 weeks, but it hurts when I hear ‘twins’ and I know in my heart that they are triplets.” Courtney says that her daughter Reagan will sometimes help her explain that Brady passed away.

“She’ll tell them, ‘My brother Brady is in Heaven with my daddy.’ Usually, that’s when other people get it. I don’t want Brady to go unrecognized. He will always be my little boy. To call them surviving triplets makes me happy because I know he gets the credit he deserves.” Since Courtney’s story went viral, the new mom told IJ Review that she has received a lot of hateful backlash about her husband as well as her lost triplet:

“People tell me they are glad the baby died or that they hope Child Protective Services comes to take my family away. Unless you walk a mile in my shoes, you have no idea what I’m going through. They don’t see that I’m a healthy, fit mom who takes care of her children. And they don’t know how I’m handling things when I go to sleep at night.”

Despite the difficulties, Courtney is determined to set a positive example and do things as a family, which always involves Daddy. “Everyone will know about their father,” she predicted. “He was a great hero, from military to family man.” He was a wonderful man who was always willing to assist others. He was a wonderful parent and spouse. He was flawless.”