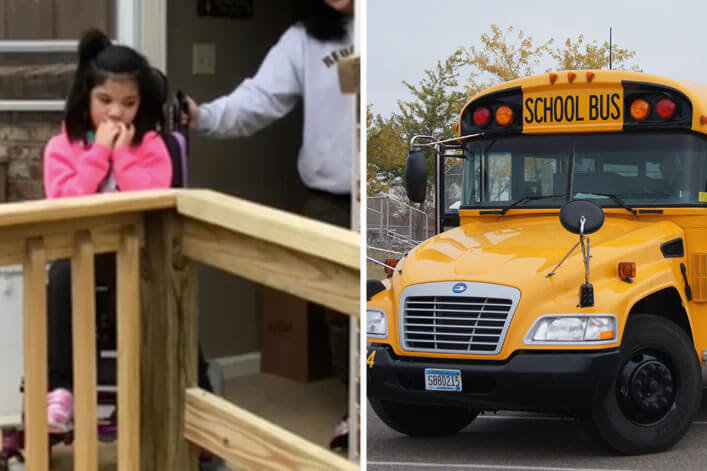 As a bus mechanic for a fleet of buses in Clarksville, Tennessee, Thomas Mitchell often finds himself filling in as a substitute bus driver. He loves chauffeuring all of the kids around but says that some just have a way of making his day a little brighter, and filling his life with a sense of purpose!

“It warms my heart more to do the elementary and the special needs [kids] because it seems like you provide more of a service to them than the kids that are just wrapped up in their normal life and don’t even notice the driver in the seat.”

Thomas had the pleasure of picking up special needs pupils during a recent shift as a replacement bus driver. He noticed Verna DeSpain fighting to get her 10-year-old daughter out the door on that day.

“This mother was coming out and her daughter has a full-size wheelchair, and as she’s coming out of the door, there’s just hardly any room to maneuver this wheelchair.”

His heart broke for this family, and Thomas felt compelled to help them—not just out the door that morning, but in a way that Verna DeSpain never expected.

Verna’s daughter, Lydia, was born with a disorder that causes her to have seizures and stunts her development. The mother said she had bought a ramp to assist in getting her wheelchair-bound daughter in and out of the house, but it was difficult to use.

Having seen their struggle, and driving Lydia to and from school, Thomas made a phone call to Verna.
“[He] just called and said, ‘I was wondering if it was OK with you if we could build your daughter a ramp.’”

In just a few hours, Lydia had a new ramp, and the DeSpain family no longer had to stress about leaving the house. Verna said that the portable ramp she had before was all she was able to afford. She’d even injured herself trying to carry her daughter. She calls the new ramp “a major blessing.”Jennifer says her husband is “a good man,” and knows exactly why he felt compelled to help the struggling mom and her daughter.

“That’s just the way way he is,” she said. “If someone is in need, we help.” I’m so proud of my husband!! Tom Mitchell, my hubby, is a mechanic for our school system and is sometimes asked to drive bus routes. About 2 months ago, he was driving a special needs route that he had driven a couple of times. Each time he noticed this one mother would have to bring her daughter,

who is in a wheelchair, up and down about 3 or 4 steps anytime they would leave or enter the house. He could see how difficult it was for this mom to maneuver her daughter and her wheelchair on the small landing in front of her apartment, and he didn’t feel the temporary aluminum detachable ramps were long enough or sturdy enough to be considered safe.

This really made my husband uneasy and concerned. He wanted to do something to help this little family out and to make sure they had a safer ramp and one that would make going up and down safer and easier for both mom and daughter. After making some phone calls and discussing his ideas with some of his co-workers, Anthony Puckett & Mike Greene, they came up with a plan.

Tom got in touch with David Adams at the Lowes on Lowes Dr. Mr. Adams was able to work some charitable magic and donate all of the wood needed to make this family a deck and ramp. Today, Tom, Anthony, and Anthony’s son Nick along with Anthony’s brother Randell, & Mike met up at the family’s house and they completely built the deck and ramp.

All on their own time, with their own tools, and all out of the kindness of their own hearts!!! I know these guys didn’t do it for a pat on the back or for any recognition whatsoever….but I can’t help but feel proud to be married to such a kindhearted and giving man! He noticed someone who could’ve used some help, and without being asked, he did something about it!

Even his friends/co-workers and their family got involved because they are kindhearted and caring people as well. In a world where so much hate is being spread around, I just wanted to share that there are still good people out there, doing good deeds and that humanity still exists!! Thomas’ wife, Jennifer, shared pictures of the construction process on her Facebook page, as well as the final reveal.