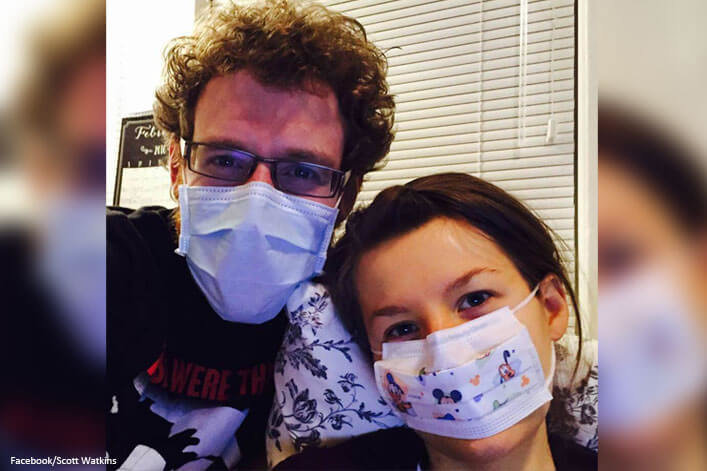 Allergies are a BIG deal these days. Now more than ever, it’s terribly common to meet someone who’s allergic to peanuts, or gluten, or dairy, etc.
People suffer from allergies of all kinds, but what if you were allergic to everything, including your spouse?

For Johanna Watkins, this unthinkable scenario is her reality. The 30-year-old began to develop allergic sensitivities back in 2012 when she began dating her now-husband, Scott. The couple was married in 2013, and Johanna’s symptoms continued to accelerate out of control!

“We’ve been seen by dozens and dozens of doctors,” Scott explains. “None of them knew what was wrong. She’s been hospitalized multiple times.”
In 2014, Johanna was diagnosed with Mast Cell Activation Syndrome, a rare and progressive immunological condition.

“We know the name of this disease, which doesn’t mean we know the answers. But when things hurt you and you don’t know what they are, that’s much more bewildering than when you at least know what’s hurting you.”

He continues: “With this disease, the systems your body has that are supposed to protect you, are actually hurting you. Johanna’s severity is one of a kind. She has it in an exquisitely horrible way. It’s a hellish experience. She’s constantly almost entering anaphylaxis (a severe, potentially life-threatening allergic reaction).”

Johanna has been forced to live in utter solitude within the couple’s Minneapolis home as a result. “Her condition doesn’t get worse if we control her environment completely, so she’s been secluded for a year and a half.” When a person’s throat starts to close in, they usually go to the emergency department.

But Johanna’s throat is always constricted, and her body hurts—just it’s part of her daily routine because these cells see everything as a threat.” Scott claims that his wife has a list of 15 foods she can consume and that even if those meals make her sick, they won’t kill her. For the past two years, Johanna has eaten the same two meals that Scott prepares for her.

“One consists of a grass-fed chuck roast with carrots, celery, salt, and steamed mashed parsnips. The other is a cucumber noodle salad, made with cucumbers, lemon, carrots, capers, cilantro, and kiwi. I add ground lamb with turmeric and cinnamon and salt. Those are the only two meals her body tolerates.”

Not only is she allergic to almost all foods, but she’s also allergic to all people, except for her siblings, who are her closest genetic relatives. Even her parents will cause her to become ill. Scott explains that if he stays around here for more than 15 minutes, she’d likely go unconscious and they’d have to rush her to the ER.

“Who would ever think that your presence would hurt someone?” It’s an unimaginable life that Scott and Johanna live, but the couple makes it work “She has the main floor of the house: dining room, living room, bedroom, bathroom and sun room. I wanted to give her the best part of the house because she never leaves, and when you’re stuck in one place for the foreseeable future, I want her to have a beautiful space.”

He continues: “I live upstairs and never enter her space. I do sometimes see her through glass as she’s on a couch and I’ll wave to her. It’s hard for me to see her because she’s so sick. Also, because I love her so much and I can’t be with her, seeing her doesn’t fulfill all those missing pieces of our relationship.

We haven’t kissed in about a year and a half, maybe two years. We talk on the phone all the time. We watch shows together—she watches the show on her TV and I watch the show on mine.” Scott and Johanna know that her life hangs by a thread—that any unwelcome particle could be fatal to her fragile body. But their faith and love is admirable—that even in most people’s highest level of pain and suffering, they’ve found peace.

“Psychologically, she’s the world’s healthiest woman. She’s the strongest woman I know. She has faith and hope and takes joy in what she can each day. I’m just immensely proud of her. She’s amazing.” Scott admits that it’s hard, but this is the life they live, and they are blessed.

“We believe with all of our hearts that God is in control of this situation and our faith carries us. There are a million ways she could look at her life or I could look at mine and say “Woe is me,” but that doesn’t fix anything and it doesn’t lead to happiness. There are many times I’ve been so angry at what has happened, but I don’t stay there, I don’t live in that. We have joy in our days. There’s sadness, too, but we move on.”

“Not only so, but we also glory in our sufferings, because we know that suffering produces perseverance; perseverance, character; and character, hope. And hope does not put us to shame, because God’s love has been poured out into our hearts through the Holy Spirit, who has been given to us.” ~Romans 5:3-5