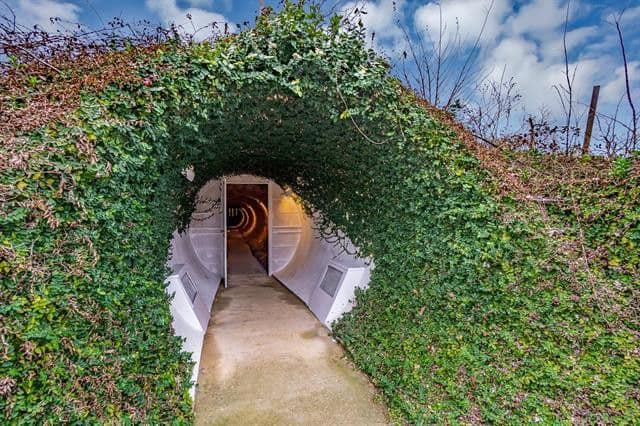 This home in Buffalo, Texas, is as private as private could get. You literally can’t see it because it’s built underground! The quaint residence in Buffalo is on the market for a whopping $2.25 million, according to its listing agent, Terri Alexander. If you think that’s too steep of a price, seeing the home’s interior and the entire property might make you change your mind!

As you might have figured, the house has no natural light. However, Alexander said the home’s bright decor more than compensates for that lack. This underground dwelling features gigantic wall murals and vaulted ceilings that give the space a more open feel. From the looks of it, claustrophobic people won’t even dare enter this home. However, its own listing agent reassures those who might be interested that the house is a lot more comfortable to be in than what it appears to be.

“When I first saw it, I was concerned I would feel closed in and disconnected,” she told realtor.com. “I was really relieved to find that’s not how it felt at all. I have a tendency to be claustrophobic, so I was concerned that I would get in there and slightly panic, and I didn’t. It was actually comfortable.”

The underground home is situated beneath a 40-acre property and measures about 3,000 square feet. It has three bedrooms and two bathrooms. A circular entryway that Alexander likes to call the “Hobbit Hole” serves as the entrance to the residence. It opens into a long hallway painted to look like a brick tunnel inside.
Once you enter, you’ll be greeted with an open space where the kitchen, dining, and living room are set up.

The walls and ceilings are covered with murals and more artwork. Alexander said the unique furnishings in the home can also be given to its future residents. The house consists of five interconnected domes joined by tunnels which lead to other rooms in the house. Each room has its own theme. One bathroom is decorated with famous artworks such as Leonardo da Vinci’s “Vitruvian Man” and Sandro Botticelli’s “Birth of Venus.”

One bedroom features a tropical beach design coupled with matching furniture and decor.Alexander isn’t sure just how deep the home is underground, but the rooms have vaulted ceilings about 25 feet high. While there are other homes built into the hillsides of the area, it’s the only house that is completely constructed underground.

“I’m not sure that I know of another one like this in Texas, not completely underground, the way this one is. It’s different. It’s going to take somebody very eclectic that wants to purchase a house—because it is out there,” she said. This enormous property also has aboveground structures, including a garage and two workshops.

The garage is currently single level but is wired for a second story. It also boasts a workspace that is large enough to allow anyone to run their businesses out of. In fact, the owner himself has done so for nearly 20 years, according to the listing agent. One workspace measures 2,600 square feet with three rooms and one bathroom, while the other is about 5,000 square feet.

The lot also has several spring-fed ponds and lots of gardening space. One of the ponds has a convenient wooden deck overlooking it, which looks like the perfect spot to get some fresh air and relax. The underground home can also go off-grid completely. While it’s on a local power grid, it sources water from a well on the property and has its own septic and water system. The house is also equipped with a generator that can keep the entire home running at full power for two weeks.

Glenn Young, the owner, had it built in 1999 for two reasons: to acquire seclusion and to demonstrate that building dome homes underground is absolutely safe and practical. And he is correct. Young hasn’t done any upkeep on the house in 20 years, and it’s still “as solid as a rock.”

The underground dwelling might potentially be fully off-grid. While it is connected to the local electricity grid, it gets its water from a nearby well and has its own septic and water system. The mansion also has a generator that can keep the entire house running for two weeks at full power.

Constructed in 1999, its owner, Glenn Young, had it built for two reasons: to gain privacy and to prove that it’s completely safe and practical to build dome homes underground. And he’s right. 20 years later, Young has put no maintenance in the house, and it’s still as “solid as a rock.”

Alexander acknowledges the fact that it will be difficult finding a new owner for this extraordinary home. “It’s going to take someone very like-minded, who’s very private, who doesn’t want to be found easily, that does want to work from home and maybe operate a business from their home … It’s going to be hard to find the right buyer,” she told TODAY Home.