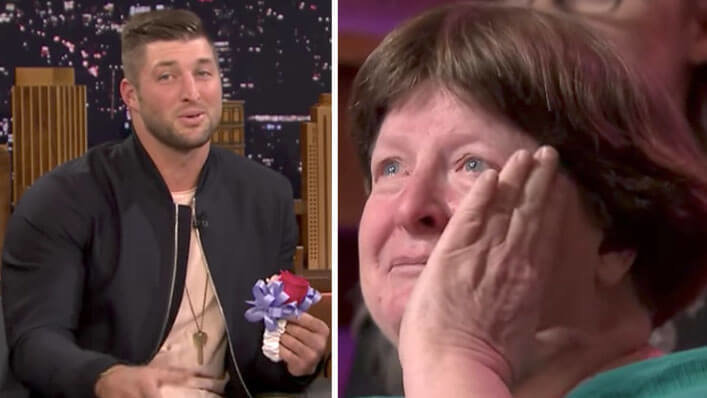 Look up the term “Jack-of-all-trades,” and I’m convinced you’ll find Tim Tebow’s name right next to it. The 29-year-old college standout made a name for himself at the University of Florida before diving head-first into an NFL career that later turned into a minor league baseball career.

Not only does he absolutely love Jesus Christ and His people, but Tim also has a heart for missions. In 2015, he opened the Tim Tebow CURE Hospital in Davao City, Philippines—a country his family holds near and dear to their hearts—and he hopes to one day get married to a God-fearing woman who wants to raise a small village with him. (How’s that for a dating profile?)

When he’s not at batting practice, or openly talking about his faith at a press conference following a game, Tim spends his time doing charity work. It’s had a major impact on communities across the globe.

The Tim Tebow Foundation has hosted “A Night to Shine,” a global prom event, for the past three years. This one-night event honors those with special needs every year on the Friday before Valentine’s Day. Each guest arrives dressed to the nines to walk the red carpet in true celebrity style. They’re pampered by hairstylists and cosmetics professionals before hitting the dance floor for an unforgettable prom night.

This year, A Night to Shine was held at more than 375 locations worldwide, in 11 different countries. Tim says it’s his favorite night of the year. On Wednesday night, Tim appeared on the Tonight Show where he and Jimmy Fallon talked about the success of the event. But that wasn’t all he was there to do.

Tim had a special girl in the audience—Judy Adams. Judy attended the Night to Shine event in New York this year and even asked Tim to be her date. Due to a conflict in his schedule, he was unable to accommodate. But in true Tim Tebow fashion, he delivered something even better.

Tim invited Judy and her mom to come to the screening of the Tonight Show. Then during his interview with Jimmy, Tim turned toward Judy and asked her to dance with him—right there on the stage!