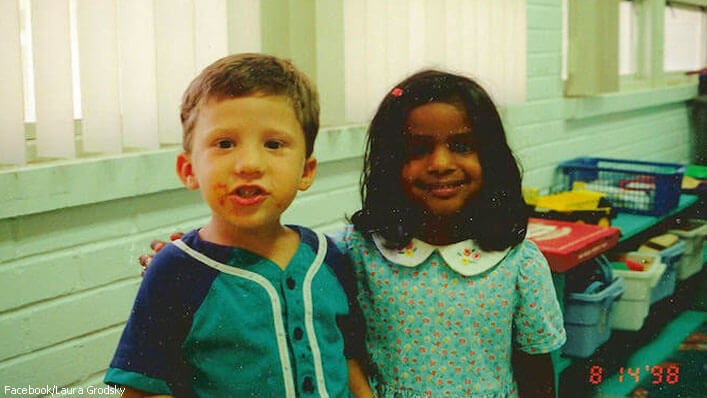 Most people don’t remember much from when they were three years old. I mean, at that time of a person’s life, your world is filled with finger painting, skinned knees, and making friends in the sandbox.

But for Matt Grodsky, three years old was when he met the love of his life. As he explains on the Instagram page “The Way We Met,” Matt knew the day he met Laura that he would marry her one day!

“Laura and I met in preschool. One of my very first memories is of being 3 years old and standing up in front of my pre-school class, declaring that I would marry her someday.

As kid, Laura taught me how to ride the swings, draw rolling hills, and the ‘right way’ to properly eat string cheese. We have fond memories of playing hide-and-go-seek, chasing after each other on the playground, and mischievously staying up during nap time. I was enamored with Laura as a child, and I still am to this day.”

Like every great love story, Matt and Laura’s has had its ups and downs—but that’s expected. God even tells us to be prepared for those in John 16:33, “In this world, you will have trouble. But take heart—I have overcome the world.”

“Eventually, we lost touch upon entering our Elementary School days, and for the next seven years, our [families’] annual Christmas cards were the only way we ever saw each other’s faces. It wasn’t until High School that we reconnected by happenstance through a mutual friend. Within two weeks, we decided to be boyfriend and girlfriend.”

Despite attending different high schools, the couple dated throughout their adolescence. When college came around, they stuck it out, going the distance in their relationship even though they were attending university in different locations.

“Until May 23rd, 2015, when I chose to keep my preschool promise and marry Laura, we remained a resilient pair.” “I proposed to her in our preschool classroom, where it all began.”

I mean, if that isn’t the making of a Nicholas Sparks novel or a Taylor Swift Song, I don’t know what is!! Cheers to you Matt and Laura!! May you forever live in happiness and love together with Christ.