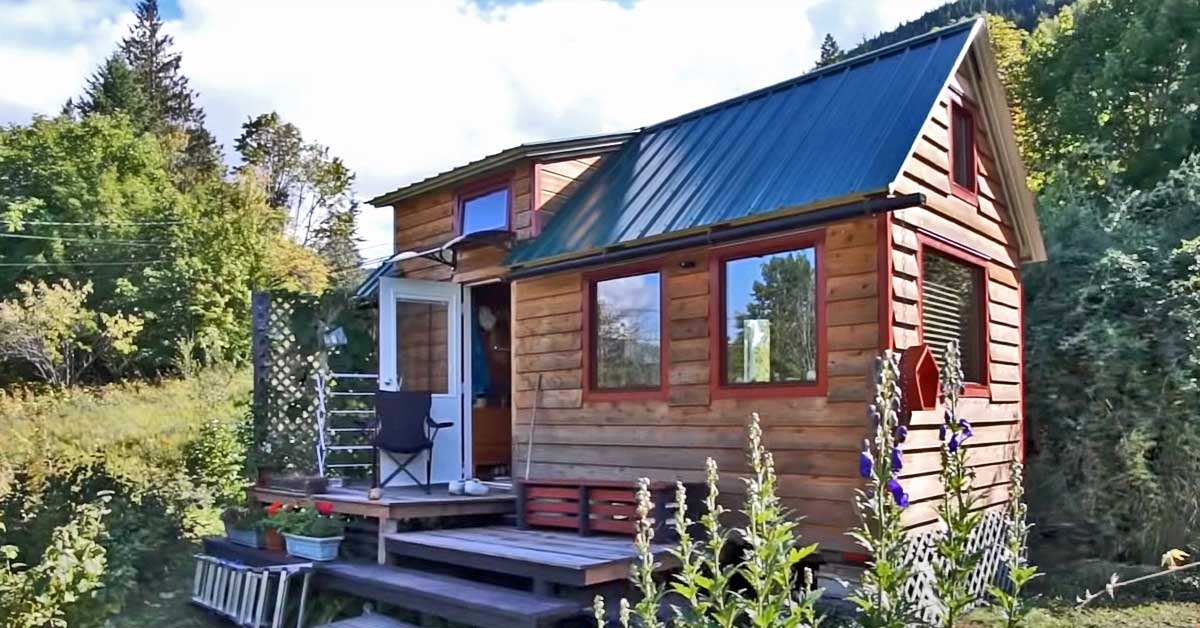 Nothing beats living in a space that you created yourself. Brigitte, a retired teacher, decided to build her own tiny home and move into it after separating from her husband. After her marriage failed, Brigitte needed a place to stay. She went to her friend’s house and found a book about tiny houses in the living room!

Brigitte opened it up and decided right then and there that she wanted to live in one. The book said people can build a tiny home for themselves, and she was more than ready to take on the challenge!

Brigitte didn’t know where she got that kind of confidence, but she just knew it was going to be her future. Never mind the fact that she had never built a home before. As they say, if there’s a will, there’s away. After all, everything can be learned, and Brigitte was open to being a student.

“At that time I was going to be 62 and I saw this as an opportunity, to do something which is totally different and that’s where it started, in reality,” she said. For a year, Brigitte did lots of research and sought the opinion of people who had building experience. After the learning phase, she began the actual work.

Luckily, a few people came out to help her. One person heard that she wanted to build a tiny house, so he sold her a trailer that he didn’t need anymore. Another referred her to a builder who was looking for work, and she hired him.

“I said, ‘You know what, I’d like you to be very precise, and I’d like you to teach me how to do it. It doesn’t have to go fast but I want to learn.’ And that’s what he did,” Brigitte said. Brigitte worked with him for almost a year, and the result of their efforts was stunning. The pair was able to build an 8-foot-wide and 8-foot-long trailer. She built it so that she could take it on the road anytime without any special permission.

Brigitte was able to design her home according to her lifestyle and hobbies. She put most of the windows on one side where the door is so she could sit and enjoy a nice view of her beautiful garden and the mountains in the distance. As you walk into the living area which also doubles as the kitchen,

the large open space just makes everything feel roomy. She showers using a bucket that hangs outside and has a handmade spout that sprays water down on her. She may only use this during the summer. During the winter, she goes to her daughter’s house in town to shower. If she isn’t available, she goes to the swimming pool, which charges a small price for showers.

Brigitte gets around town on an electric bike. It comes with a back basket where she can store her groceries. During the summer, she does a lot of gardening and grows all of her vegetables. Brigitte has a lot to share with the rest of the world. She also makes jam and kale chips and preserves her meals.

”We don’t need everything by ourselves. I feel this should be a normal way, how we can live together and learn to share. It’s not only good for the environment, but it’s also good for our pocket money, too. So that’s my approach to life in general,” she said.

Despite living in a tiny home, Brigitte lives an active life. She volunteers, attends a book club, knits in the winter, and is learning to play the piano. She also meets friends over a cup of coffee once a week. If you’ve ever thought about downsizing and adopting a different way of life, Brigitte is the perfect source of inspiration.

Take a tour of her beautiful home in the video below.