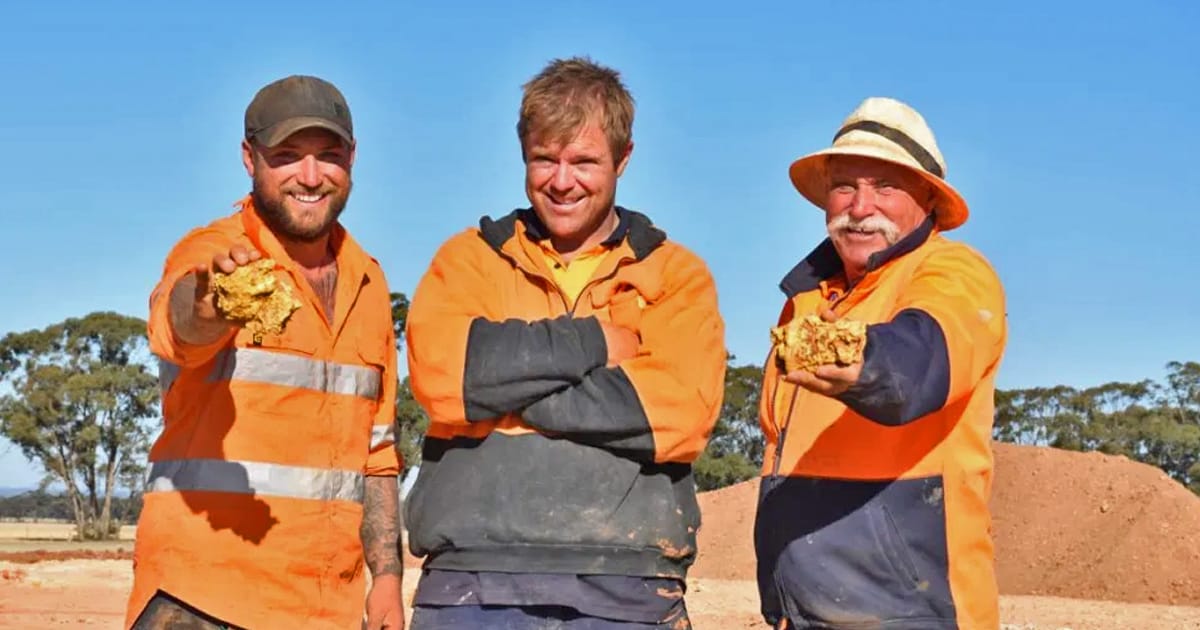 It was the luckiest day ever for these gold diggers in southern Australia after they found two huge nuggets of gold worth AUD 350,000 (USD 250,000). The combined weight of the gold chunks was at 3.5 kilograms (7.7 pounds) and was mined on the same day near Tarnagulla, Victoria.

The lucky find was featured in an episode of “Aussie Gold Hunters” on the Discovery Channel. The show, which also appears in the UK, follows a team of gold explorers who dig in goldfields in the remote areas of Australia.

The prospectors, Brent Shannon, and his brother-in-law, Ethan West, found the gold in a matter of hours with the aid of West’s father, Paul West. According to a release from the Discovery Channel, they could earn up to 30% more than the gold’s estimated value by weight if they sell the pair of nuggets to a collector.

Even before they started digging the area, Shannon sensed they were about to find a golden surprise. “I reckoned we were in for a chance,” he told Australian morning show Sunrise. “It was in a bit of virgin ground, which means it’s untouched and hasn’t been mined.”

Shannon and West waited months to get a permit that would allow them to start digging for gold in the area, according to the press release. West estimates they have gathered thousands of tiny pieces of gold in the last four years. And their recent find is one of the most remarkable.

“These are definitely one of the most significant finds,” he said. “To have two large chunks in one day is quite amazing.” The Poseidon Crew—as they call themselves—told Sunrise that they use an excavator to dig up dirt. They then use a metal detector to check if there is gold in the area.

An amateur explorer discovered gold in the earth outside of Ballarat, around an hour’s drive south of Tarnagulla, in January 2013. He discovered a 5.5-kilogram golden nugget during his excavation (12.1 pounds).

The wealth was buried at a depth of 60 centimeters (23.6 inches). Experts assessed the gold to be worth at least $300,000 at the time. According to a 2013 statement from Cordell Kent, proprietor of The Mining Exchange Gold Shop, miners have been finding gold in the area since 1851, but contemporary technology has become a crucial tool for modern prospectors.

“In the old days miners could only see or feel gold — but now with detectors they can hear it,” he said. Shannon and West’s gold find is the largest in the history of the Aussie Gold Hunters. Although a team, each of them had different reactions upon finding the golden nuggets.

“When you find large piece, you don’t automatically get excited. In the first instance of seeing a big lump of gold, it’s not instantly joyous, it’s more a sense of accomplishment and history. The monetary side comes in last,” Shannon said.

On the other hand, West said it was different for him. “My reaction is bit different to Brent. He is like a child in candy shop,” he said. “I see the prospect of making a lot of money. When you see the size of the nugget and start working out what it’s worth, that’s pure relief.”

Gold mining remains a significant industry in Australia since it began in the 1850s. The town of Tarnagulla, where explorers mostly find gold, was founded during the Victoria Gold Rush. According to a local website, the area became very wealthy for a time when prospectors moved there to make their fortune.

When we hear the word “mining,” what usually comes to mind is people in hard hats working underground. But in reality, gold mining is a long and complicated process, and mining the ore (metal-rich rock) is just a part of it. Long before explorers can excavate any gold, extensive exploration and development must first take place.

This is to determine the size of the deposit and how to extract the ore safely and efficiently. It takes an average of 10 to 20 years before a gold mine is ready to produce material that can be refined. And that makes finding gold all the more worth it. Congratulations on your lucky find, Poseidon Crew!