This father and his daughter converted an old train caboose into a tiny Airbnb. Take a look inside 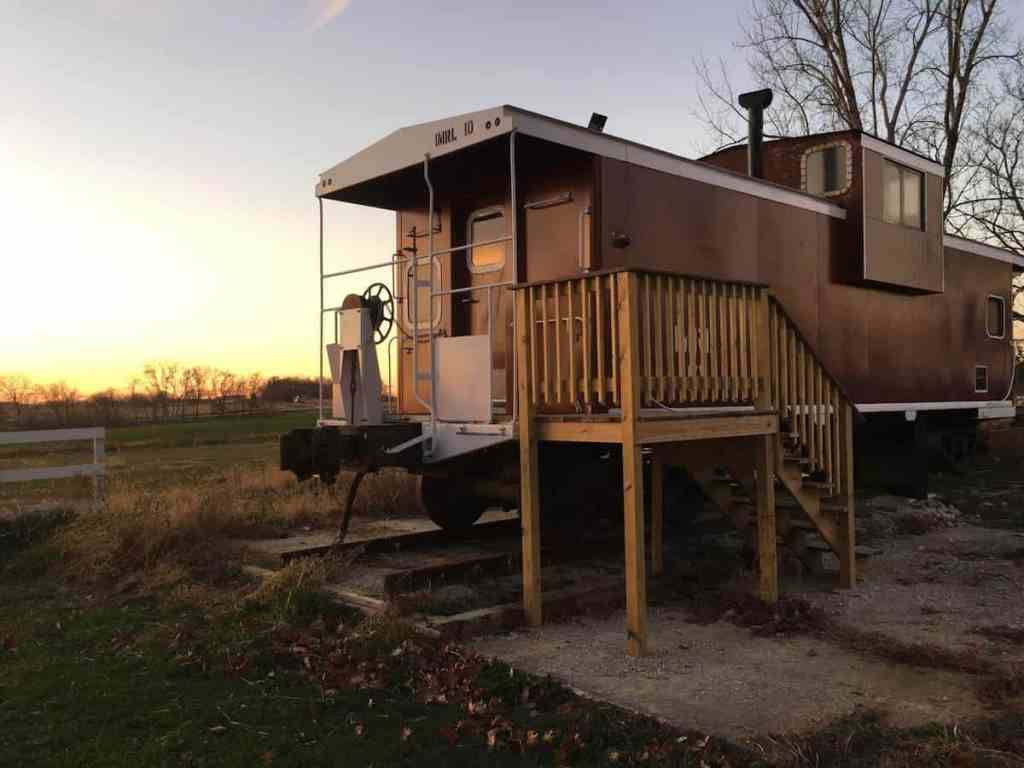 A unique Airbnb in Decorah, Iowa, is giving guests major railroad nostalgia. The idea for the tiny dwelling all began when Jim Dotzenrod, 65, came across a row of train cabooses along a road in the city.

He had driven by them several times before deciding to take a look. Right then and there, he thought he could turn it into an Airbnb. However, the owner of the cabooses wasn’t looking to sell any of the 10 he had, so Jim had to search for one himself. Luckily, he found one just 30 miles away at a salvage recycling yard!

Jim managed to strike a deal and purchased a 52,000-pound caboose built-in 1973 for only $8,000. The retired carpenter knew his way around home renovations and Airbnbs. But despite his experience, nothing could have prepared him for the challenge of transporting the train caboose from the scrapyard to his property. But with the help of a crane, a lift, and a semi-truck, he was able to pull it off.

Jim also bought real railroad tracks to serve as a base for the 8.6 feet by 30 feet caboose once it was transferred to his yard. The first order of business was stripping the caboose to get it ready for renovation.

“I had to get the iron out of there, and after I gutted it I had to power wash it to get that diesel-fuel smell out,” Jim explained. “It was strong — it was just that lingering odor of diesel fuel.”

He then returned with an air freshener to keep the room smelling fresh. The caboose contains a queen bed as well as a bunk bed arrangement that can accommodate up to four people. The queen bed is on the second story, while the bunk beds are on the first. A kitchen with a microwave, refrigerator, double-burner hot plate and barware supplies for drinks is also included. WiFi, a TV, and air conditioning are all available in the caboose.

Visitors can relax on the couch in the living room and warm up by the electric fireplace. Jim’s daughter, Danielle Dotzenrod, who assisted in the space design, said her father used his carpentry talents to replace the caboose’s original ironwork with woodwork.

“My dad can do anything he sets his mind to — like, absolutely anything — but my dad is so low maintenance himself,” she said. “So when we built this together it was a good combo because he could build whatever and have me nudging him like, ‘Hey, let’s make this as cool as we can.’”

Jim handcrafted a staircase, set the cabinets in place, and created a space for the queen bed. He also built a wooden outdoor deck visible from the windows of the caboose. There, guests can enjoy a view of Jim’s pasture, where visitors can feed and pet horses. Guests can also be taken on a horse-drawn carriage ride if they wish.

“When we see guests sitting on the deck having a cocktail during sunset or watching the horses in the pasture, it feels nice to offer city people that chance,” Danielle said. “It’s something that we country people probably take for granted, but it’s something that they really appreciate.”

Because of his day job, Jim had to do work away at his passion project at night or during the weekends. The renovation cost him around $4,000 and took about six months to be completed in November 2016. He said he spent approximately 300 hours working on the caboose, which they named “CR Station Train Caboose.”

Jim was in charge of most of the structural changes, while Danielle stepped in to add personal touches to the space. She chose much of the overall design, including the floor covered in black tiles surrounded by oak wood. The father and daughter wanted to preserve the caboose’s charm, so they kept the original conductor’s chairs and railings.

“I think that’s something we pride ourselves on,” Danielle said. “There’s a few other cabooses out there, but sometimes when you’re in it you don’t even really realize it’s a caboose.”

“The outside, of course, looks like a caboose, but you have to keep just a little bit of the novelty of it in there, so visitors know what it was like back in the day,” Jim added.

Guests can travel into town and enjoy activities such as kayaking, sightseeing on the 11-mile trail, visiting Decorah’s Toppling Goliath Brewery, or taking lessons at a nearby shooting range.