This 13-year-old boy builds 89-square-foot cozy home in his parents’ backyard for only $1,500. Take a look inside 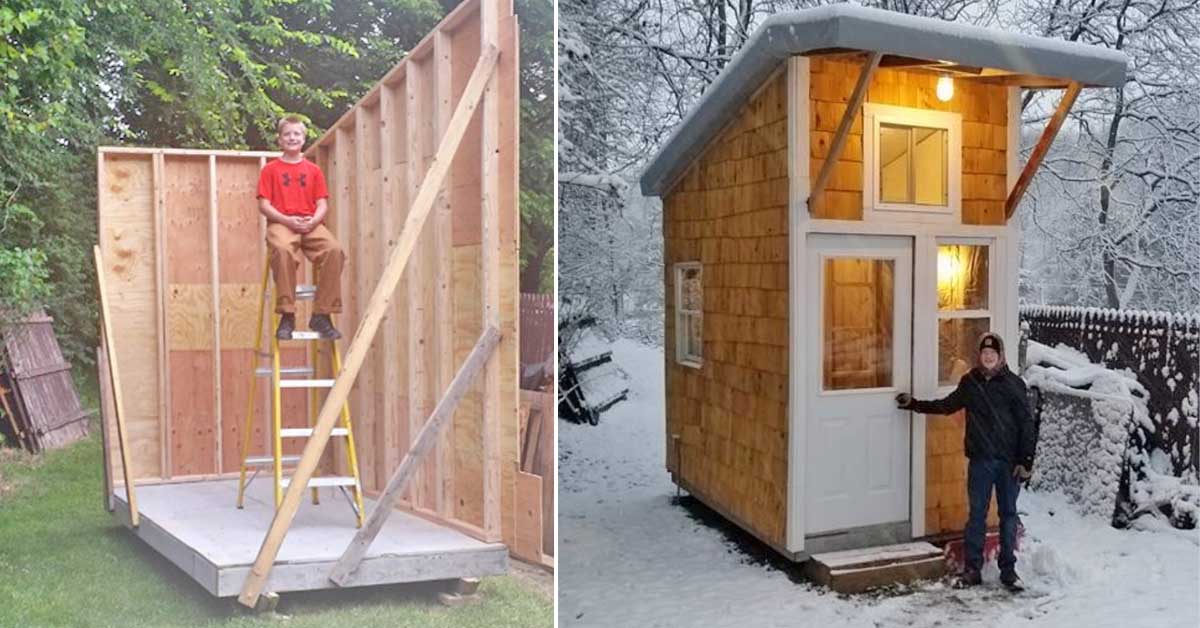 Most teenagers look forward to turning eighteen, so they can finally move out of their parent’s home and live in their own space. But for one teen, that came sooner rather than later when he began building his “starter home” in June 2016.

Luke Thill, then 13 years old, built an 89-square-foot cozy beautiful home right in his parents’ four-acre property in Dubuque, Iowa. Thill spent $1,500 building the small structure from scratch, which he paid for by doing all kinds of jobs for neighbors and friends, including cleaning out garages and cutting lawns!

“I was just on YouTube looking around and came across a tiny house idea and then that spiraled into looking at almost every YouTube video there is, it felt like,” he told ABC News. “I got obsessed with them and decided to build my own.”

“I liked the minimalism. And I wanted to have a house without a huge mortgage,” he told the Des Moines Register. Thill was able to keep his costs down by using reclaimed materials. He took the leftover siding from his grandma’s house, and he got several windows and a front door gifted by his uncle’s friend.

His mother, Angie Thill, helped with the interior furnishings, while his father, Greg Thill, guided him along the way. His twin sister and brother also helped. The project was a family effort, but Thill did most of the work himself, including tasks outside manual labor.

He learned how to frame and wire a home, bargain for labor and other assistance, and make major financial decisions. “It was a chance for a kid to do something more than play video games or sports,” his dad said. “It teaches life lessons.”

In return for cleaning out his garage, an electrician neighbor helped him wire the tiny home. After he mowed at his apartment buildings, a local Scout leader helped Thill install carpet in the bedroom.

Thill managed to cram a seating area, a wall-mounted TV, a mini-refrigerator, a sleeping loft, and a fold-up dining table into the compact space.
He also constructed a little deck outdoors, using half cedar shakes and half vinyl sheeting.

Thill only sleeps there a few times a week and utilizes his “glorified shed” to entertain visitors because the micro pad isn’t totally livable due to the lack of plumbing.

He does his schoolwork there after school as well. Thill’s tiny house dreams don’t stop there: he wants to build a larger mobile home one day so he can bring it to college and save money on living expenses.

“The main purpose is to be my starter home,” he explained. “I’m going to save money and expand.” Thill’s tiny home gained massive attention; he was even invited to speak at TinyFest Midwest, a tiny home festival.

The teen also started a YouTube channel where he shared his tiny living experiences and the home’s building process. Before starting the project, Thill first watched tiny home construction videos.

“I couldn’t find anyone younger than 14,” he said. “I thought if no one is out there, I might as well do it so I started documenting the whole process and putting it on YouTube.”

Thill hopes his project inspires others to adopt a more downsized life. “Everyone had to have a big house, and now people have changed and realized it’s not practical,” he said. “You can save money, travel the world, and do what you want instead.”

Look this tiny and cozy house here in this video.