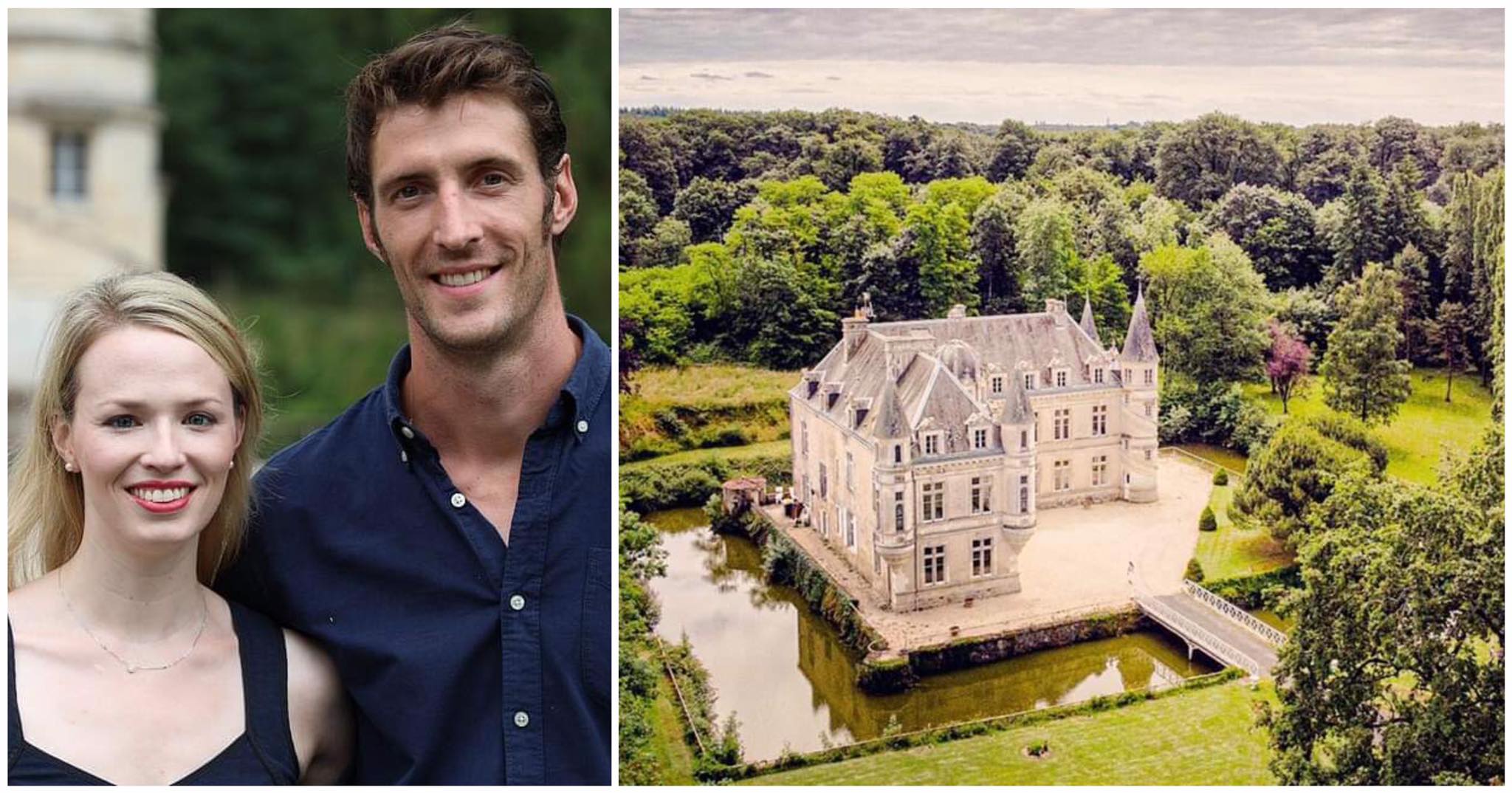 Sharing a mutual dream of one day restoring a historic property to its former glory, a hospital doctor and an engineer uprooted from their life in Scotland to start a brand-new adventure in France. They single-handedly took on the restoration of a dilapidated 15th-century château. Three years on, the building is by no means finished but is radically transformed.

Erin Choa and Jean-Baptiste “JB” Gois, both 34, met at a university in Edinburgh and gradually their friendship blossomed into a relationship. JB, who is originally from Burgundy in France, fell in love with the city of Edinburgh and spent nine years, instead of one, perfecting his English while Erin developed her career. 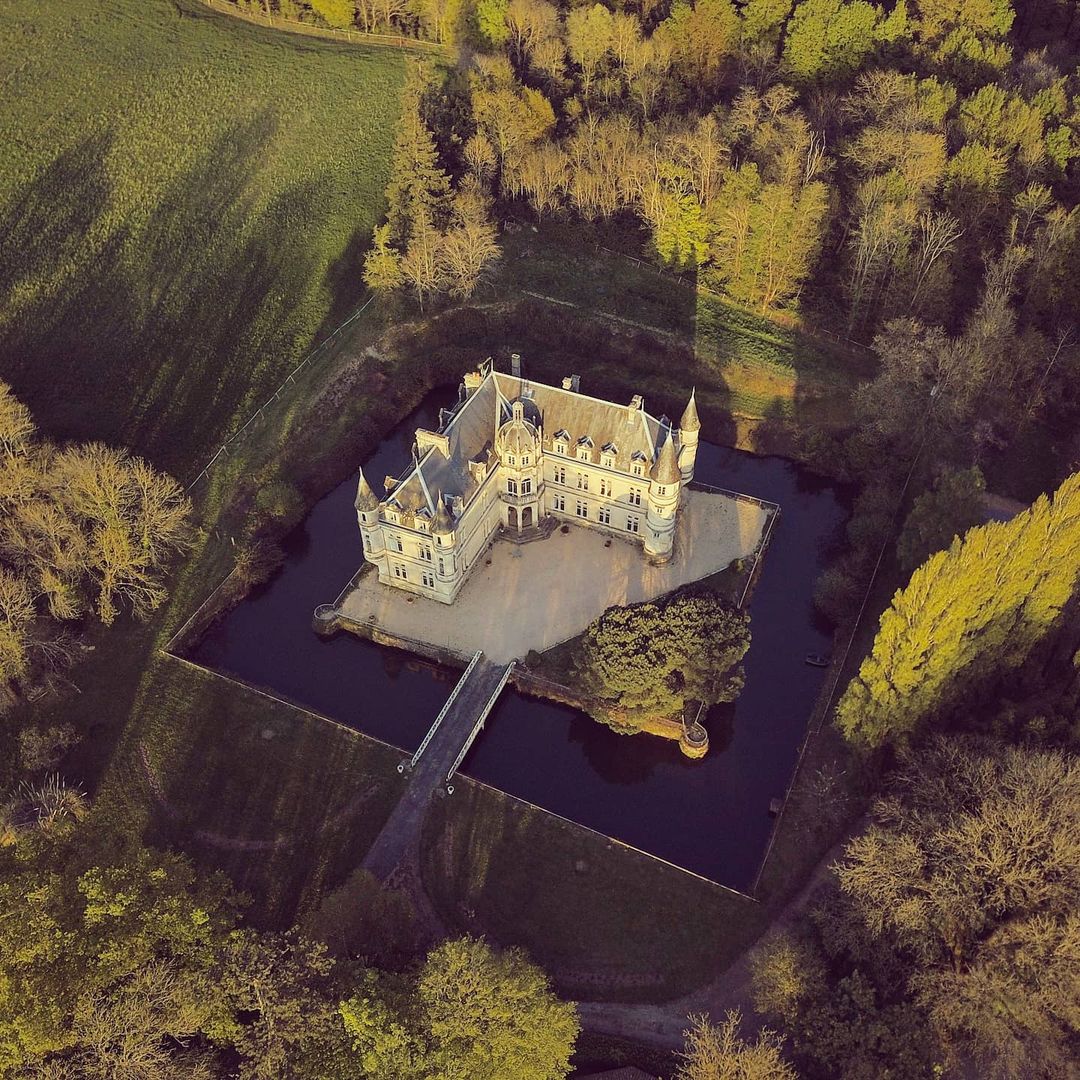 When they first moved in, the stunning Renaissance château in rural Vendée, Pays de la Loire was falling apart following three decades of neglect with a leaky moat and rotting window frames – meaning the DIY-mad couple have their work cut out for them and often clock up 14-hour days.

Anaesthetist Erin and Jean-Baptiste, a mechanical engineer from Burgundy who she met in Edinburgh in 2010, now making a living from hosting dinner parties and letting out their fairytale castle as holiday accommodation after acquiring the keys in July 2018.

“The château was in fact built by a lady, Jaquette de la Ramée, who asked permission from the French King, Louis XI, to build a fortified château at Bourneau protected by a moat.” The original château fell into ruin in the 18th century, during the French Revolution, so it was only until 1860 that the current Château de Bourneau was built on the foundations of the original château as the marital home of a local aristocratic family,” Erin added.

Erin described the property as “located in a park of 16 hectares of meadows and woodland, containing five big outside houses, four of which have been transformed into holiday cottages with four individual swimming pools,” in the heart of the historic village of Bourneau. She also mentioned that a lovely wrecked orangery, which was once used to grow exotic fruit and flowers for the château in the 19th century, has been restored and is now utilized as a rustic wedding site by the couple. 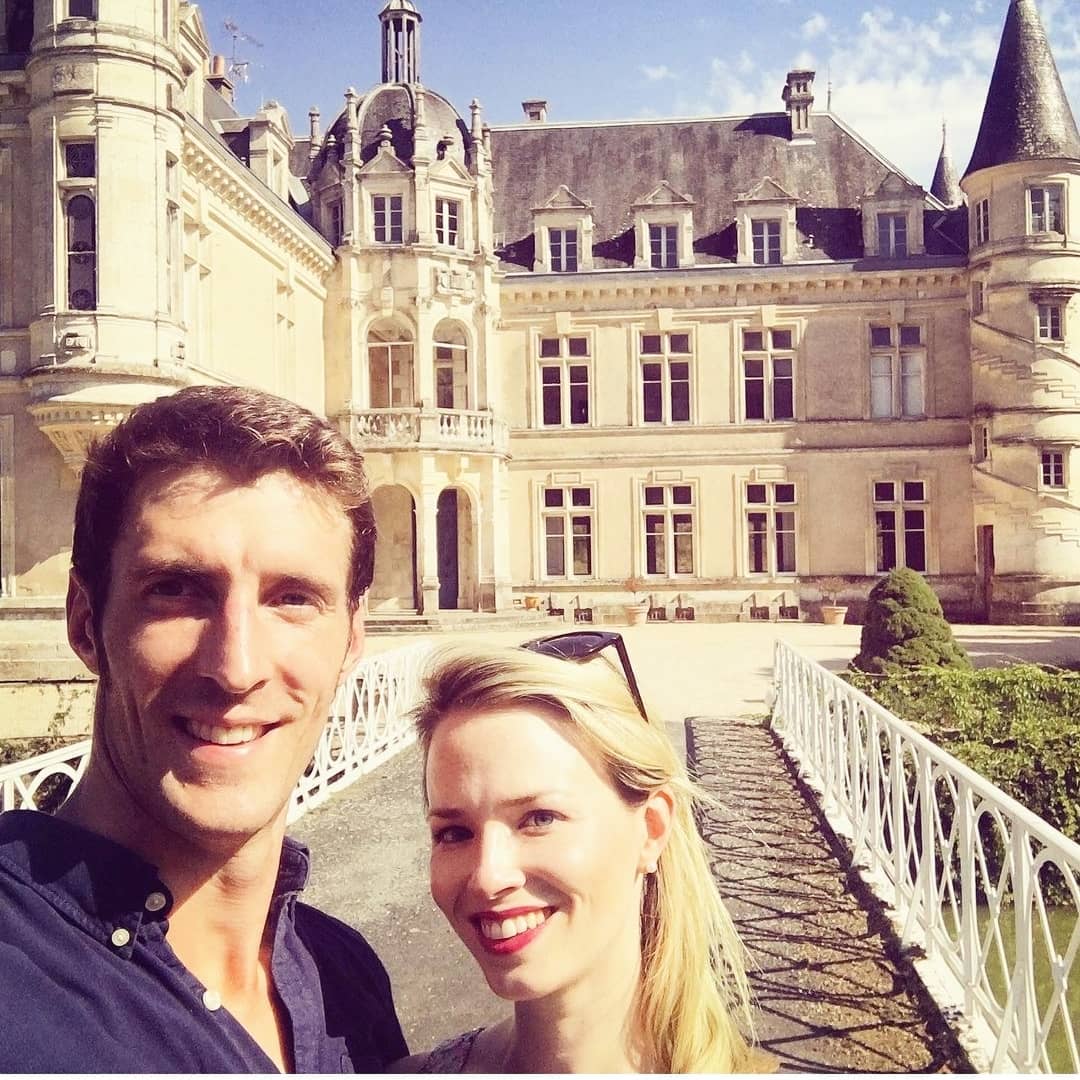 Sitting on its own private island, the château’s exterior is grand and in the 16th-century style. However, the interior is in a simpler 19th-century taste. The château comprises approximately 55 rooms, including 30 bedrooms, some of which are “very tiny servants’ rooms” in the second-floor attics, said Erin. It boasts turrets and spiral staircases, and the salons, with their duck-egg green paneling, oak parquet, patterned tiles, and chandeliers that were conceived in traditional French Napoleon III style.

There are also four large holiday cottages on the estate, which were converted by the previous owners from stables and a coach house.When the couple moved, Erin’s medical qualifications were recognized in France, but her spoken French was not at a professional level when the couple moved. In order to work on a stop-gap project alongside improving her French and a return to medicine, the couple decided to push their retirement plans of restoring a historical monument to its former glory. 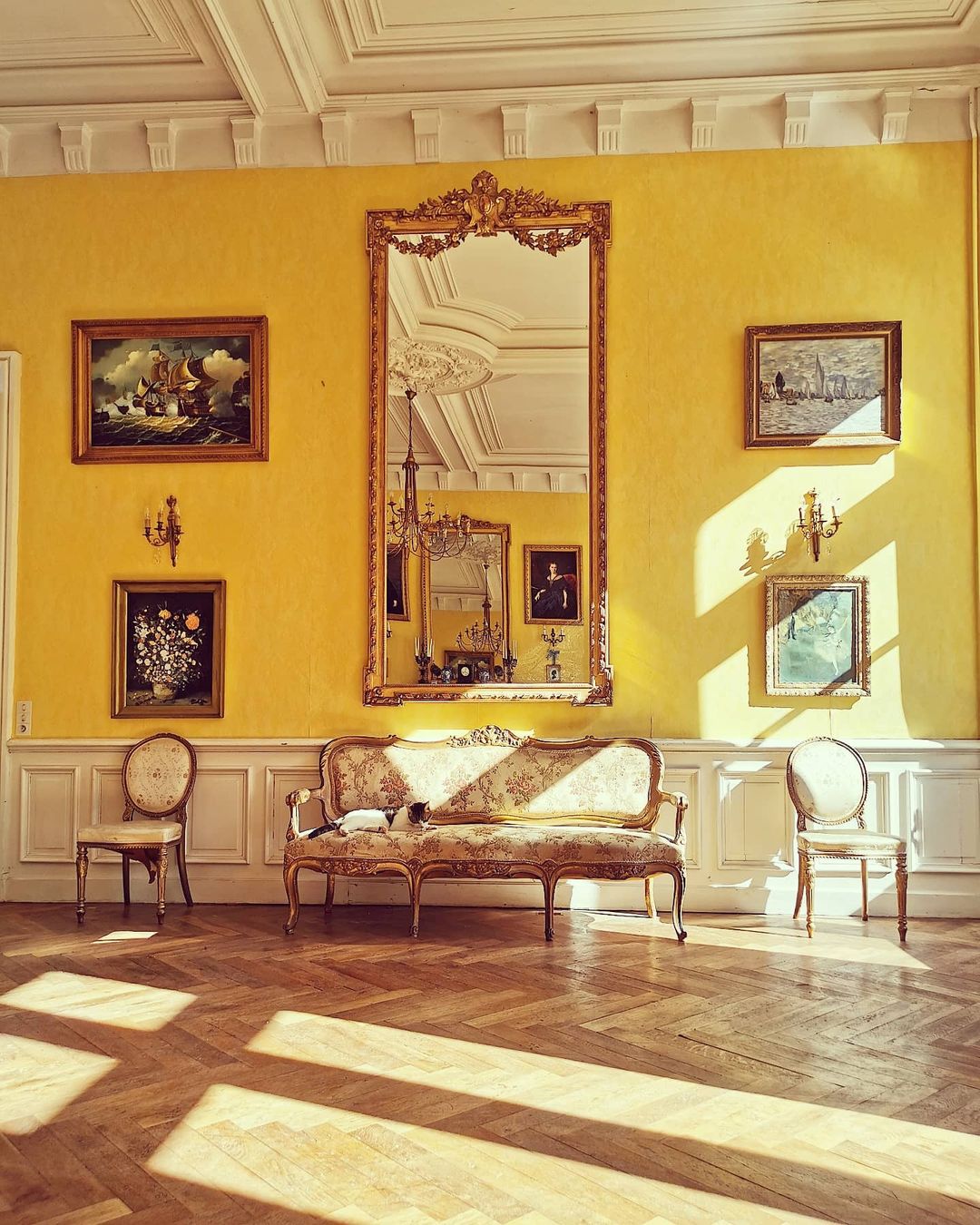 “It suddenly struck us that looking after a project on this scale required energy and the overwhelming piece of advice we received from other château owners was “start young!” Erin said. “We wondered if this was our window of opportunity to restore a historical building and create a business alongside it.”

As the running cost and restoration of the magnificent project were huge, the couple decided to start a business to fund the maintenance and the expenses.Being at the Château de Bourneau for the past three years and tirelessly looking after the estate, Erin said: “From day one, we rolled up our sleeves and started our maintenance and restoration process. We do everything ourselves from plumbing, plastering, gardening, painting to accounting, marketing, and managing our business.

“Days are long and we work hard, but it is a real privilege seeing the château come back to life.” When the couple first bought the château, the exterior always had the “wow factor,” said Erin. However, it did require maintenance. In the process of restoring the property, Erin and JB replaced and repainted windows, hand-cleaned the façade, and fixed and repainted the grand doors and moat bridge. They also planted new roses, hydrangeas, and new trees so the château could appeal to couples who want to get married.

Meanwhile, the “south wing ground floor was in a reasonable state and just required maintenance,” Erin said. “However, the central marble staircase and the west wing is another story! Years of unchecked water ingress from the moat into the medieval cellars means that the château has experienced rising damp.” After unblocking a combination of medieval and 19th-century plumbing to help drain the cellars, 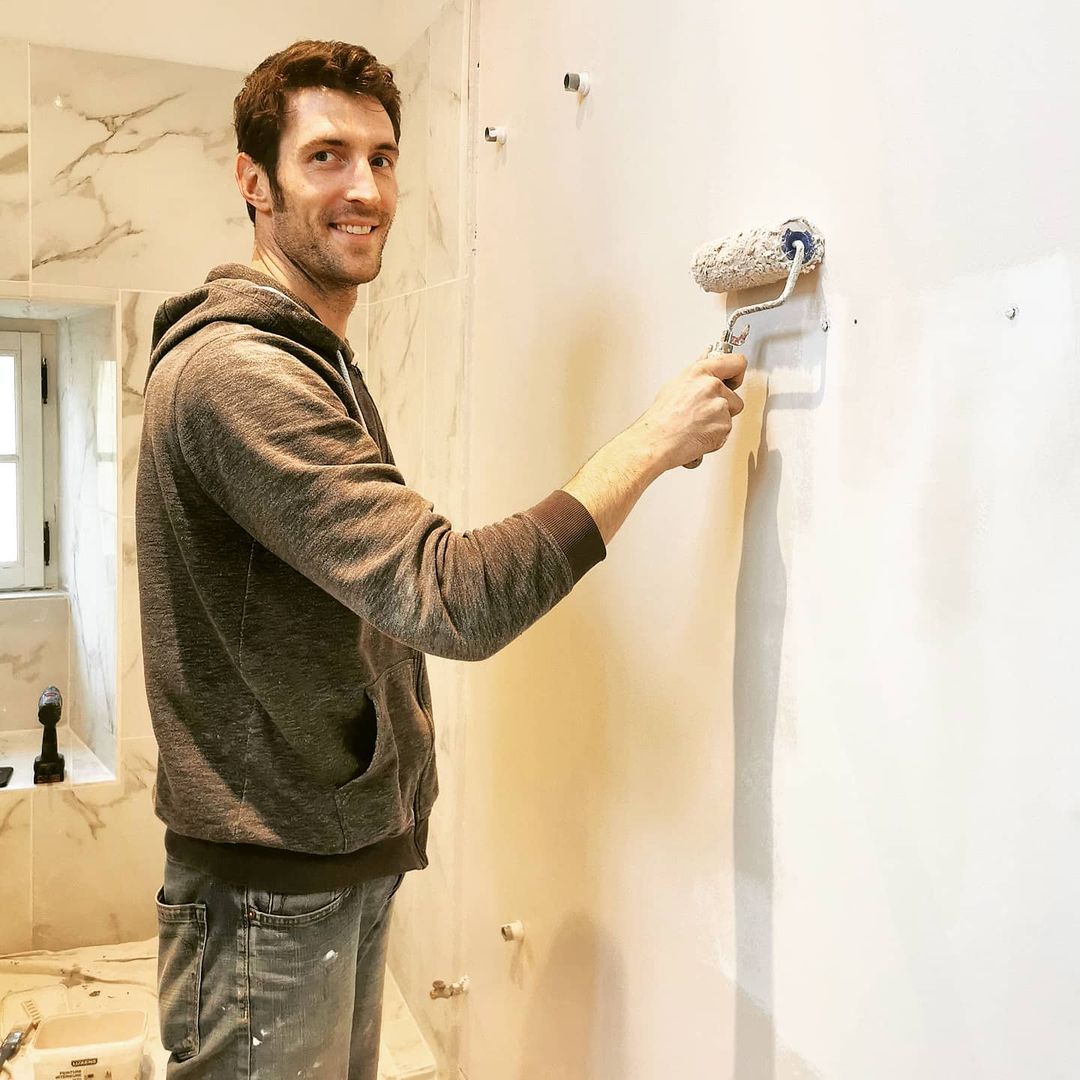 Erin and JB got to work renovating the Versailles parquet floor of the Red Salon, as well as the marble staircase and the mold-encrusted 4-meter-high walls. With the help of friends, they spent two weeks polishing and repainting the stair railings and metalwork, as well as finding a treasure trove of ancient furniture and decor left behind by the previous owners, including original paintings of the château’s forefathers.

Two authentic 19th-century mirrors, 19th-century marble basins, bookcases, French beds, and dressing tables “One was constructed for the château and bears the initials of the two founding families, which we discovered hidden beneath a dust sheet. “We refurbished it, and it now hangs proudly in the marble staircase,” Erin explained. “It’s quite essential to us.” 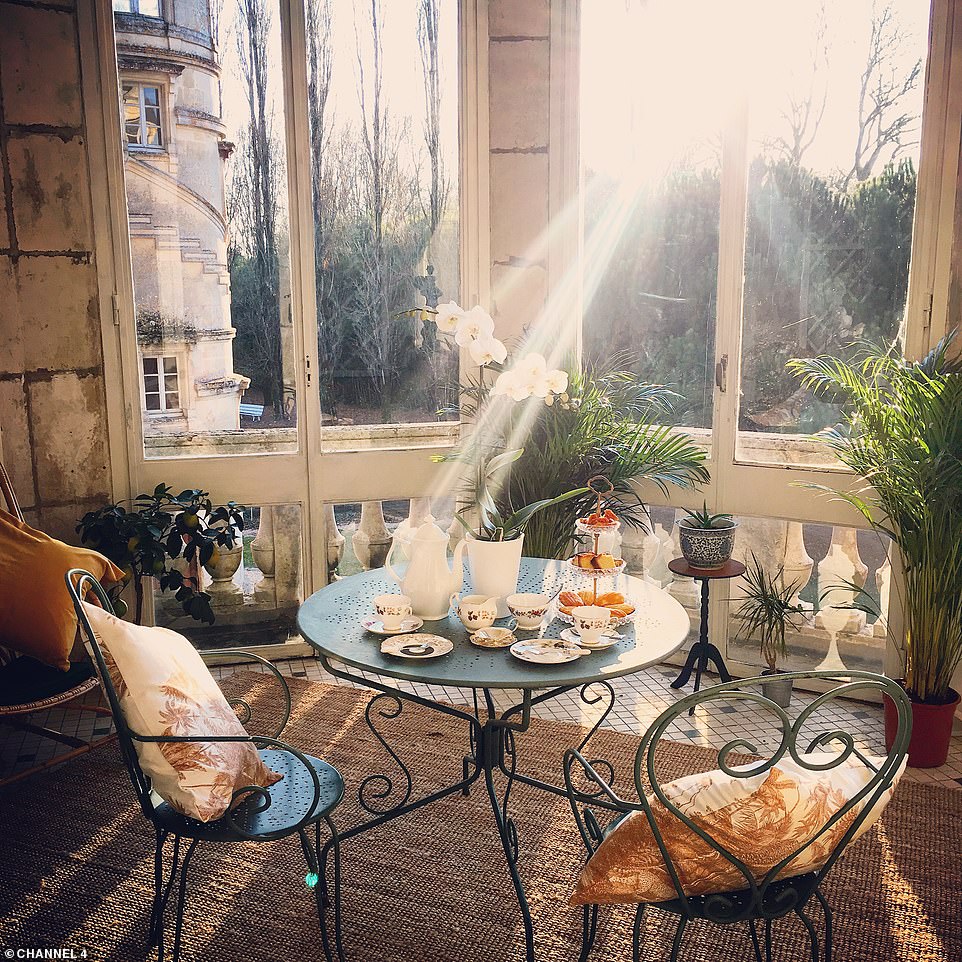 Restoring such a massive project didn’t come without challenges. When the pandemic hit, the couple lost their expected annual income from weddings, events, and holiday bookings and this impacted their ability to make faster progress on their restorations. During this period of time, five chimneys were in desperate need of repair, thus the couple launched a fund. Generous donations allowed them to save the first chimney, which was at risk of crashing the roof, in the nick of time. 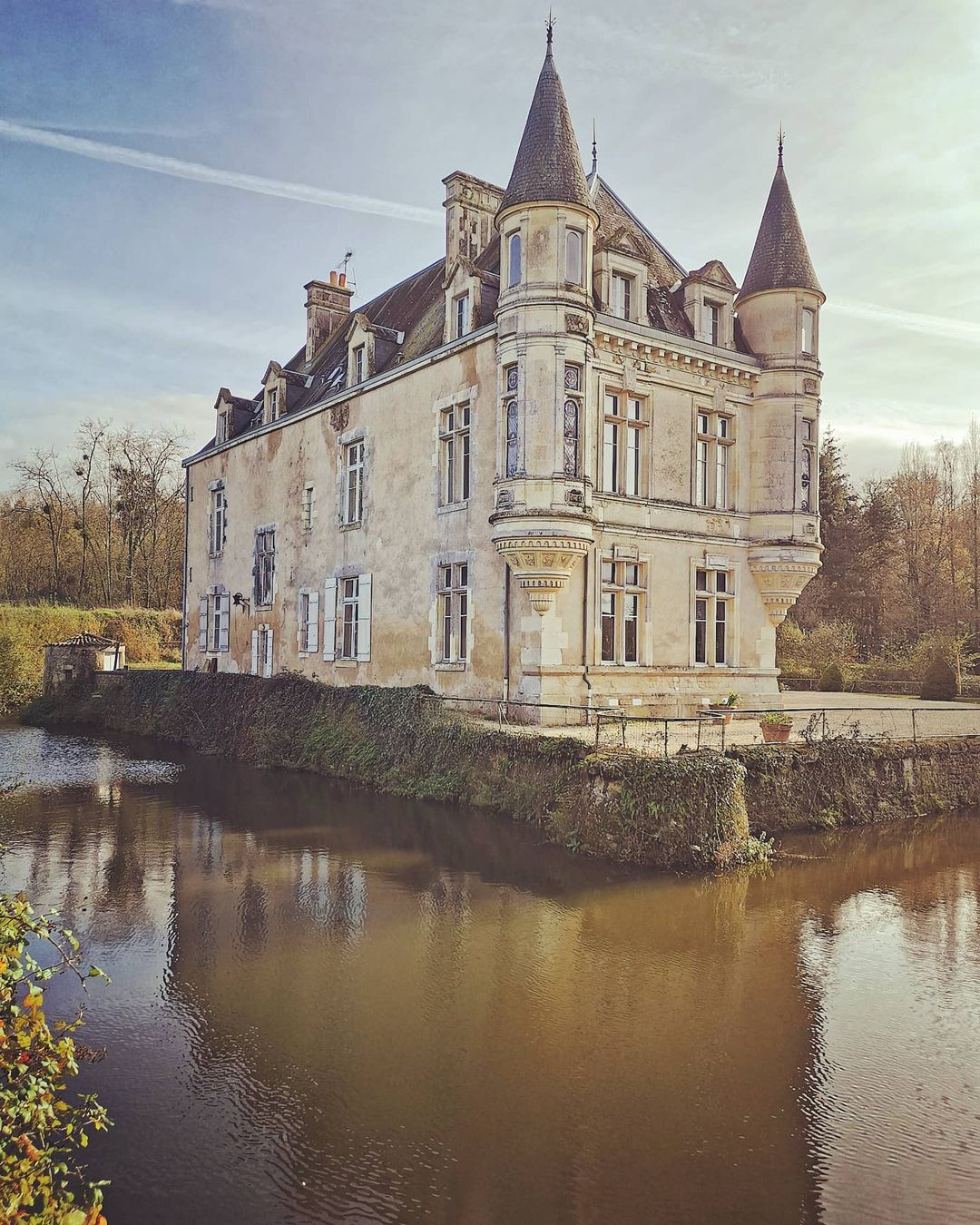 “People often say we live in a fairytale,” said Erin, “but the true fairytale was the goodness of strangers who, like us, believe the château deserves to be looked after and saved.”As the quiet period progressed, Erin and JB turned their attention to the first floor where massive renovation was required, as the château functioned as a military institute in the 1960s and many of the original 19th-century features were ripped out.

The honeymoon suite and its adjoining solarium were rebuilt by the newlyweds, who restored the French paneling and ceiling roses and added a period-appropriate luxury en suite bathroom. The couple’s next initiative is to renovate more “château-chic” guest rooms in the south wing. The couple is upcycling and restoring as much original furniture as they can along the way, eager to return these historical antiques to their appropriate places.

“We sew cushions and curtains, make picture frames and gold-leaf, rewire chandeliers,” said Erin. “There really is very little we won’t try ourselves. Most of the tools we use are bought in local DIY stores; we aren’t trading professionals, just pragmatic people with a willingness to learn, work hard, and try our best.”Currently, Château de Bourneau is not complete, according to the couple, and it is still their private home. 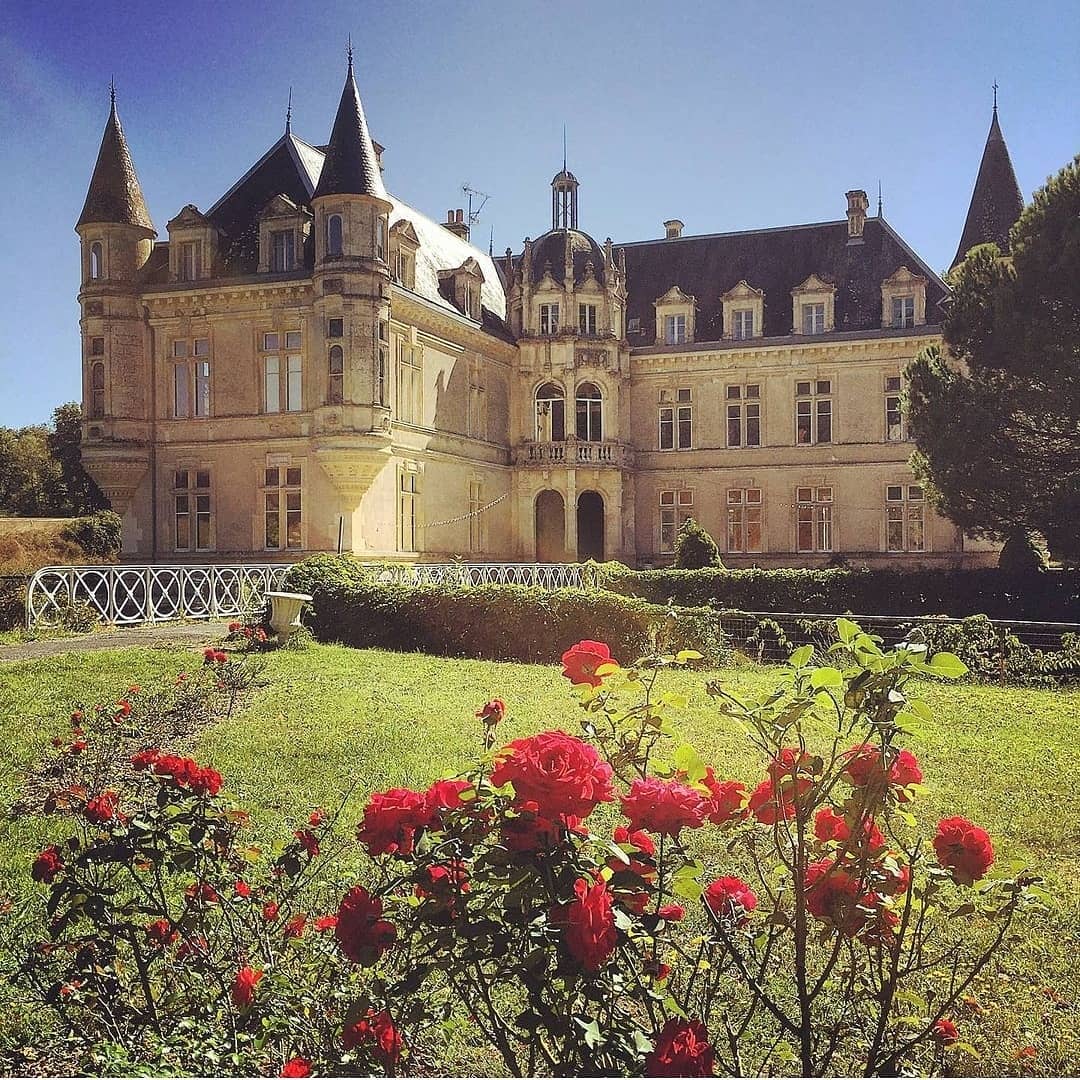 They plan to open suites to guests within the next few years, and their four large holiday cottages sleep 44 people in total. Friends and family, while unable to visit the site during the early months of the pandemic, have since journeyed to Vendée to see in person the couple’s immense progress. “We are so lucky to have their support, and even though they think we are a bit eccentric at times to take on such a project, they understand our passion … châteaux were built to be shared,” said Erin.

“Château de Bourneau still takes my breath away now as it did the very first day I saw it over the wildflower meadow,” Erin stated after three years of working and living there. It’s looking cleaner and more well-loved, and all of the public spaces have regained their 19th-century charm.” We still have a long way to go behind the scenes to restore the rest… However, we’re still laughing and working hard to restore this fairytale castle to its former glory. We genuinely love what we do, despite the hard hours and often difficult tasks.”