Once upon a time, tiny houses were just that: tiny. When the tiny house movement started gaining steam a little more than a decade ago, right on the heels of the Great Recession, tiny house pioneers like Jay Shafer and Dee Williams were living in deliberately simple tiny homes, each measuring less than 100 square feet.

That was the whole point of the original tiny house ethos: intentional simplicity, and striving for financial freedom from onerous mortgages and the hamster wheel of mindless consumerism.Fast forward to now, and sometimes it seems that the tiny house movement has gotten much, much bigger, both figuratively and literally. Nowadays, it’s not unusual to see tiny homes pushing 300 or more square feet, and they’re often equipped with upscale appliances and finishes, and the upscale prices that go along with them.

It can be a bit disconcerting to see this trend of “tiny house bloat” (as our own Lloyd Alter has coined it) since it seems to run counter to everything that the tiny house movement is supposed to stand for. Granted, the radical simplicity of the movement’s early days eventually led to the mainstreaming of its original ideals – and that’s likely why we are where we are, with tiny houses that aren’t all that small. Nevertheless, there are those who still sincerely believe in that original message of simple living, like Cody Makarevitz, founder of Pennsylvania-based tiny house building company Comak Tiny Homes.

Makarevitz recently completed this gem of a tiny house that is truly tiny – not somewhat tiny, but actually tiny, spanning only 13 feet long and measuring 150 square feet. Here’s a quick video tour of The Mountain tiny home via Tiny House Talk: Built from the shell of a former mobile hunting cabin that now sits on a reinforced steel trailer with new axles, the Mountain features a modern steel and vinyl siding exterior, and a cozy, wood-clad interior. It is outfitted with a main living room area, kitchenette, storage cabinets, and even a shower and bedroom with skylights. Makarevitz explains on New Atlas that in its own way, this tiny house is an attempt to go back to basics:

“I wanted to build this model as a contradiction to the extra-large tiny houses I see being made and sold. They seem to be getting larger and more expensive each year as the movement grows. I wanted to bring it back to the roots a bit. Tiny for tininess sake. 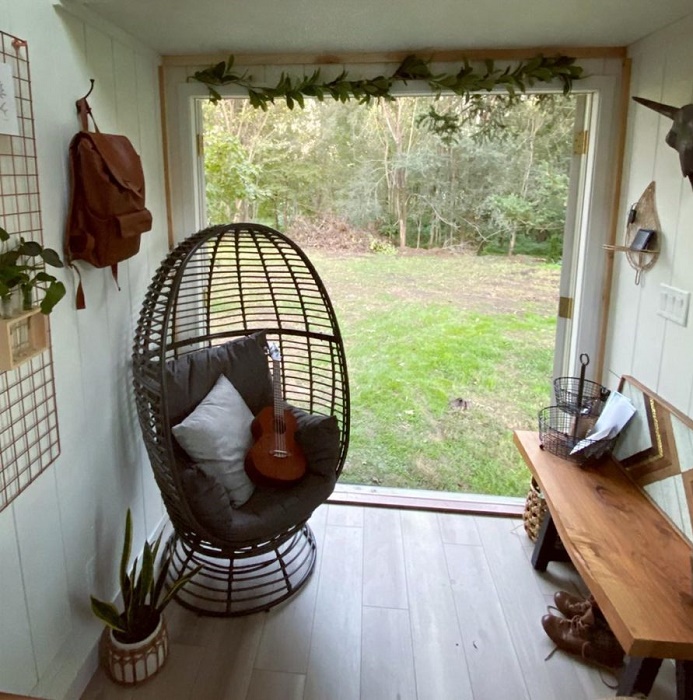 Also, the other micro dwellings I’ve seen appear to be very small, enclosed boxes. I wanted to try it out and see what kind of ideas I could come up with to make a smaller area livable.” Makarevitz has done an outstanding job of building a useful tiny home out of such a little space.

Much of that success may be attributed to the clever layout, which places an emphasis on openness and light whenever possible. Double French doors, for example, help to expand the interior area by bringing the outdoors in.

Rather than install bulky, built-in shelving in the living room, Makarevitz opted for a chic metal wall organizer, a handcrafted bench, and a movable garden armchair. There are even some mirrored panels that have been installed in the ceiling, which cleverly bounce light around to make the tiny interior look and feel larger. The kitchen has all the necessities: a sink to wash dishes in, a live-edge walnut wood dining counter with barstools, a mini-refrigerator, and a bit of storage space for foodstuffs and dishes.

The Nature’s Head composting toilet is off in one corner, and a fabric curtain provides privacy. The home’s best feature is probably the gorgeous cedar-lined shower, which sits within a small bump-out and is topped with a 3-foot by a 3-foot wide skylight. Says Makarevitz: