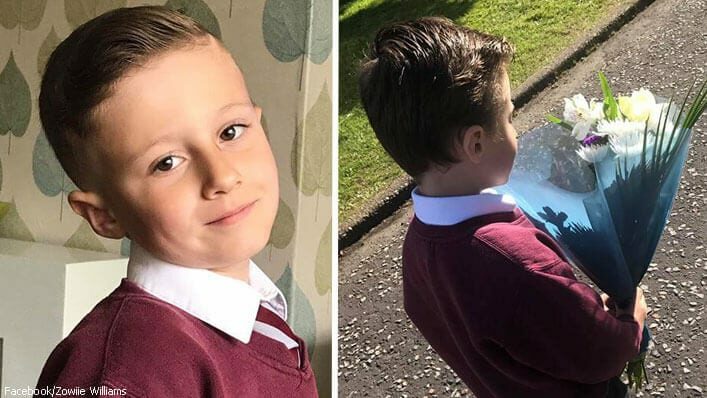 One of my favorite things to ask little kids is whether or not they have a “boyfriend” or “girlfriend.” Of course, it’s not because I think a six-year-old should be embarking on romantic journeys before losing their first tooth. I just love love love the shy, giggly, and innocently-honest responses that almost every small child will give in regards to that question.

As parents, it’s our responsibility to raise up the next generation of respectful, honest, and caring men and women. As Zowiie Williams learned last week, it starts with these childhood friendships.

After her son Callum broke up with his “girlfriend” at school, Zowiie learned that he did so at the advice of another boy telling him what to say and do. Callum’s delivery was less than kind to the little girl, and according to Yahoo, he even included some inappropriate language.

For these six-year-olds Zowie Williams, heated playground break-ups are no laughing matter. “I was disappointed to learn yesterday that he had upset his precious little girl as a result of another guy companion telling him what to say [and] do. So much so that I felt compelled to have a lengthy conversation with him.”

After learning that the girl had left school upset, Zowiie and Callum had a conversation, and Callum made the decision to apologize on his own. “Today he is marching into school with flowers and an apology because I believe we need to teach boys the importance of how they should react in different situations,” said the principal. The flowers, according to Zowiie, were Callum’s idea, but not one she agreed with.

“I also explained that buying flowers won’t automatically fix the problem and made sure that he understood he couldn’t be mean and expect anything materialistic to fix what he says, and that it is never okay to be mean to anyone especially a girl,” she said. “It’s something I feel very strongly about.”

The proud mother watched as Callum brought his “girlfriend” the flowers and apologized to her in front of his peers. “It was a very proud moment for me as his mother. It was a learning step. One I hope he will carry with him always.”

Her Facebook post has garnered praise from parents across the Internet who love the way Zowiie is teaching her son to respect others and holding him accountable for his actions—not anyone else. “Callum now understands that what other people think or say should not sway him into acting like he doesn’t care about other people’s feelings.”

Though he’s just out of kindergarten, I have no doubt that Callum learned an important lesson in the respect that’s sure to shape and mold the respectable man he will grow up to be.