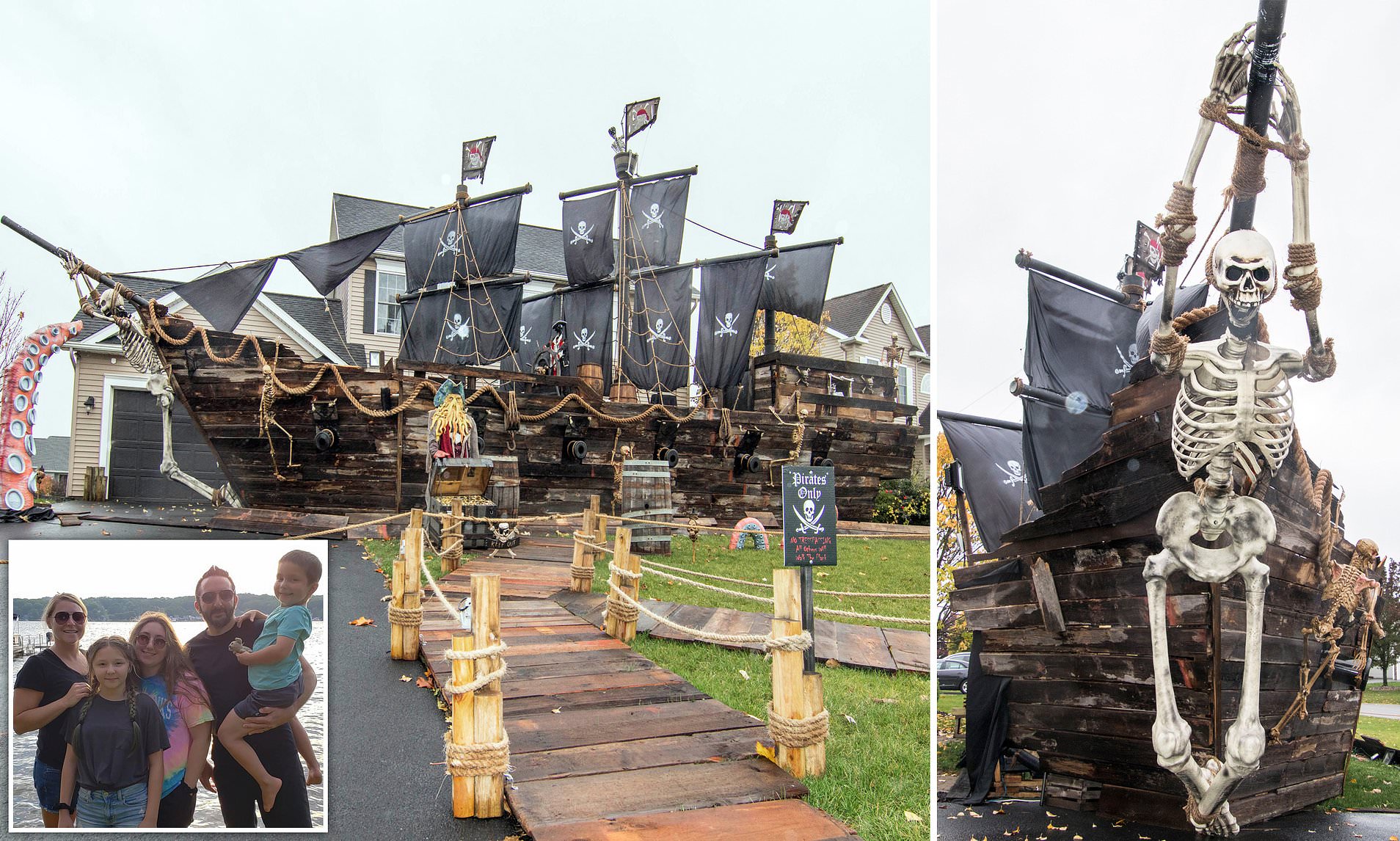 If there was a contest for the best Halloween decor of 2020, this New York dad’s brilliant creation would surely bag the top award.A few years back, Tony DeMatteo’s 13-year-old daughter asked if they could do a “Pirates of the Caribbean” themed Halloween. The good dad obliged and designed a small pirate ship for her!

But this year, DeMatteo went all out and built a more massive and elaborate pirate ship that is 50-foot long and 20-foot tall. It’s made from recycled metal, wood, and rope and is complete with black pirate flags and a huge skeleton. It’s now displayed in the facade of his home in Churchville.

Building detailed Halloween decor like this is something that he enjoys doing, so DeMatteo didn’t mind putting in that much time and money into the project. “I’m a big fan of Halloween,” he told FOX TV Stations. “It’s been growing bigger and bigger each year. I always try to out-do myself.”And all that effort proved to be worth it. DeMatteo shared that all his three kids loved the ship.

“They help me build it. They play on it, and they like the attention they get too,” he said. “I really don’t have a background in this. I just do it for fun.” DeMatteo shared pictures and videos of the pirate ship on Facebook, showing off its special effects: six cannons that light up, a fog machine, and even fire blasters. He also put together a soundtrack that synchronizes with the cannons and fire blasters.

The vessel appears to be pricey, but DeMatteo claims it was built for less than $3,000 dollars. He received all of the wood he used for free over the course of a year, and he acquired the majority of the other supplies over time.

“It takes a long time, but it’s not so bad when you’re having fun,” he explained. His social media pieces have gone viral, and DeMatteo has described himself as “extremely astonished” by the public’s reaction to his work. He had no idea how well that would go over with the public.

DeMatteo also discovered a way to put this Halloween decoration to good use. The pirate ship tour is free, but he requests that all visitors bring non-perishable canned goods for the Open Door Mission, a food bank in Rochester that helps feed those in need.

So far, the response to his request has been extremely positive. His garage is now overflowing with contributions, and more are on their way. DeMatteo has yet to come up with a plan for next year’s Halloween. However, he believes that he will abandon the pirate ship concept in 2021.

“We’re already planning for next year,” he explained. “However, I don’t have a firm plan yet.” I probably won’t do a pirate ship again unless there’s a lot of overwhelming support for it.” In the spirit of Halloween, another father from Iowa made the event more memorable for his 12-year-old daughter.

Greg Dietzenbach, 42, created an all-too-familiar Ada costume: a Zoom interface costume! “We didn’t even sure if our community would have trick-or-treating this year because of COVID-19.” My children have become Zoom experts as a result of social separation; it is how they attend school and communicate with family and friends.

“It felt like a costume idea worth pursuing,” he explained. “2020 has been a difficult year; it’s wonderful to know we’ll be bringing some joy to others (from a safe distance, of course).”

Dietzenbach works for a company that creates corporate environments and museums, so he recreated an ongoing Zoom conference using his fancy work tools. These inventive fathers are deserving of the Dad of the Year honor!