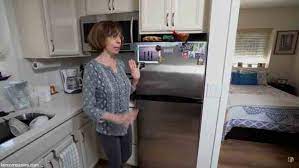 When Lee Reich became a widow, she had to pay $1,900 for a one-bedroom unit she has been renting. Eventually, the lease got higher and it did not make sense to pay for an empty nest.

Her daughter, Stacy Lince also suffered the same ridiculous problem in terms of rent pricing in Santa Rosa, California. The two paid off a combined amount of $4,000 per month, which continued to rise as time went by!

The two decided to pool their resources and bought a modest home with a detached garage they have big plans for. At first glance, you wouldn’t think that the one-and-half car garage would be livable—you could barely park a vehicle inside it.

The garage was filled with shelves and large fixtures. The 380-square foot is less than a fifth in size of the home Reich had when her husband was still alive.

During the construction for the one-bedroom unit, the rates were as high as $25,000. After a local tragedy that burned over 5,000 homes in the area, the city partially waived the fees for secondary units. Stacy and her mom were able to save $18,000.

When you first walk into the compound, you’ll notice a simple patio between Stacy and Lee’s houses, which is open to the sky. The mother and daughter nearly appear to be neighbors, sharing a yard in which they may hang out and relax during the day.

The patio functioned as a common area for Stacy and Lee’s small abodes, giving the impression that they were neighbors. Stacy works from home, and Lee has tea parties for friends and visitors on occasion.

The first thing you’ll notice upon entering Lee’s one-bedroom unit is the comforting surge of brightness coming from the skylight. The kitchen comes with a full-sized fridge, a microwave convection oven, and a regular sink. Considering grandma Lee lives by herself, it didn’t make sense to have a dishwasher (but in case she needs to use one, she can always pop a visit to her daughter’s house next door).

Despite the small size of the garage-turned in-law unit, Lee welcomes guests more often than you’d expect. She calls the occasional visits, ‘T-tour,’ as in ‘tea and a tour.’ “You come for tea and a tour. The tour lasts for 7 seconds, and then you stay for tea.” Lee clarified.

Lee can accommodate at least four guests. The couch has a capacity for three people and another one in a separate chair opposite the coffee table. If Lee is expecting more company, she can always pop the kitchen stool out for additional sitting options.

Lee’s living room is well-suited for her needs, both in terms of design and functionality. She can use her laptop in her desk, which is directly between two tall shelves nestling books, figurines, and other memorabilia. The flats screen TV is bolted tight on the wall of her desk.

The empty nest alternative’s living room and bedroom are separated by a sliding door. Lee used to own a king-sized bed. She had to replace most of her bedroom fixtures when she moved.

Like her gigantic wardrobe on the bedroom wall, almost making up a small room. All of Lee’s shoes and clothes fit nicely while her sheets, blankets, and covers can be found beneath her bed.

Lee and Stacy initially thought of having a smaller bathroom, but the contractor convinced the two to go opt for a bigger one. If Lee ever decides to still live in the unit, she’ll be needing someone else’s assistance.

The untimely fire that happened in the middle of the unit’s construction pushed back the debut of Lee’s new home. But like a phoenix rising from the ashes, the new house that only existed in a blueprint materialized from an empty nest garage. Lee and Stacy consider the in-law residence a ‘hug house.’ Lee never found herself confined and felt like she was living in an embrace.

One of the reasons why they did this project is to live in an urban family compound. It’s livable, and the person next door from Lee is someone dear to her heart.

Watch the video below for the full tour: