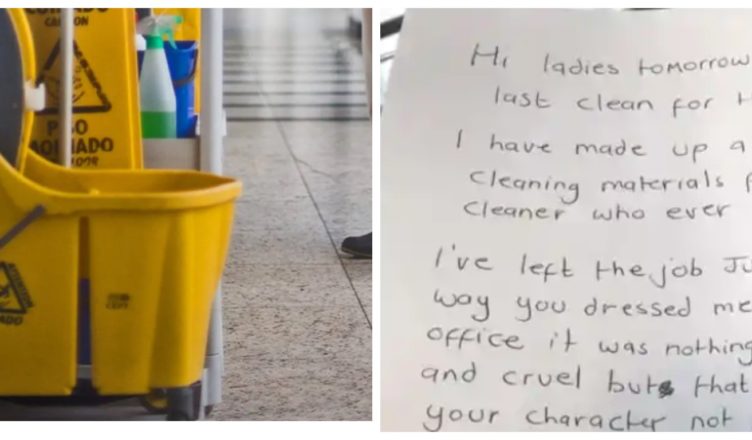 Through her viral resignation letter, a 67-year-old woman who recently resigned from her job as a cleaner is teaching the world to “be kind.” Julie Cousins left her job as a cleaner at HSBC after 35 years of cleaning at various banks, according to her son Joe. “And this is why I adore my mother.” She’s been cleaning banks for 35 years and walked out today with this lovely note left for that awful manager. Happy retirement, Mum – you always have the last laugh, don’t you?”

Joe wrote in the caption of the Twitter post. Julie wrote in her note, which has since gone viral on the platform, that she was leaving the company after a female manager dressed her down in the office. She described her treatment as “nothing more than aggressive and cruel.” She does, however, acknowledge that the woman’s actions are a reflection of her character rather than her own.

“So, please remember – in a world where you can be anything, be kind, because you are all no better than the cleaner,” Julie concluded in her note. Julie announced her retirement to the Mail Online. Although some people may have misunderstood it as merely a cleaning job, she had actually enjoyed it and relied on it financially during her five years at the HSBC branch.

Julie would leave for work after her husband, Kevin, arrived home from work at 5 p.m. to care for their seven children. She rarely saw employees because she arrived at the office after everyone had left for the day. She believes that cleaners are frequently “forgotten” by other employees, and she decided to resign following the stressful incident with the manager. Julie, like most of us, desired to work with people with whom she felt at ease.

Joe’s Twitter post announcing her resignation received a lot of attention, and many people expressed their feelings in the comments. “A manager publicly humiliating someone.” “A clown always needs an audience,” one person wrote. “I’ve never understood why people believe their job reflects their importance. I was raised to believe that a job is a job, and that anyone who gets up and goes to work, whether they pick up trash or run the company, deserves the same respect.

Congratulations to your mother! “Respect!” said another “Well done her, my father was a school caretaker for 30 years, so many rude staff.” “When I first started teaching, I vowed to be friendly to all staff who contribute to the school,” one Twitter user said. A fellow cleaner also commented on the thread. “I’m a cleaner with three part-time jobs, and people can be cruel at times.” We, as cleaners, have kept this world and all of its buildings, shops, and homes clean – cleaners are important as well.”

Julie has seven children and seven grandchildren. This incident occurs at a difficult time in her life—her mother died at the end of last year. She hopes that her story will teach people something useful. “I believe the main message is to be kind to people, especially now.”

“No one knows what is going on in the lives of others,” she explained. HSBC told the BBC that it could not comment on individual personnel issues, but that the incident is being investigated. A job is a job, and it is noble as long as it does not harm others and helps one put food on the table! Please tell your friends and family about this story.