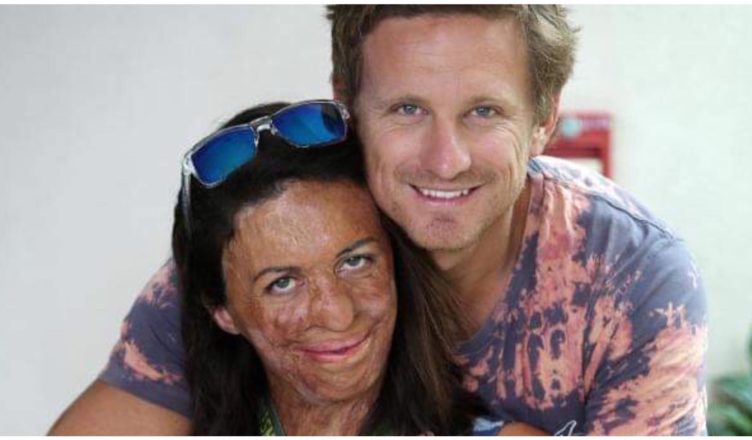 Turia Pitt has an important message for anyone going through a crappy time. She is a strong woman, but her husband helps her to be stronger. Turia was born in Tahiti and moved to Australia with her family when she was three years old.

Brought up in the coastal town of Ulladulla in New South Wales, Turia met her now-fiancé at school. Before her life-changing accident in 2011, Turia had landed her dream job at Rio Tinto and had started a new life with Michael.

But their world was turned upside down in September 2011. The mining engineer always loved pushing herself to the limit and it was no different when she decided to enter the 100 kilometre ultra-marathon in the Kimberleys.

But on that fateful day, disaster struck when Turia became trapped in an aggressive bushfire which saw her suffer burns to 65 percent of her body, losing several fingers. She spent five months in hospital recovering.

Michael gave up his job (a former police officer) to care for Turia. She often cites Michael’s love as what kept her going during her horrific ordeal, traveling he makes her feel like “the luckiest girl in the world.

Then, in June 2017, the couple announced the happy news that Turia was pregnant. Now they have two children. With her incredibly refreshing outlook on motherhood and upbeat attitude towards life, it’s easy to forget the hardships Turia has been through.

She has written three best-selling books, coached over 40,000 people in  digital courses, shared a stage with Tony Robbins, competed in the Ironman World Championships, sailed a boat around French Polynesia, walked the Kokoda Trek,

met some amazing people and I’ve grown a team and a business.“I know it’s hard to say I’m lucky, but I am lucky cause the situation could have been a lot worse,” she told 60 Minutes in 2012 when reflecting on her life-changing accident.