Many people switch careers throughout their lives, which can make for some interesting stories later on. Alonzo “Zo” Carter is currently an assistant football coach for the San Jose State Spartans in California. He’s trained and mentored countless student athletes, which often means his previous job in the hip-hop industry goes unnoticed. But not always!

You may not recognize Zo’s face, but you’ll definitely recognize his dance moves. Back in 1989, he and a few of his college friends auditioned for a music video on a whim. The song? MC Hammer’s still-unknown classic, “Let’s Get It Started.” They were hired on the spot and soon went on tour with him!!!

As the summer came to an end, Zo assumed he’d return to college to finish his degree and reclaim his spot on the football team, but MC Hammer started taking over the airwaves. Zo had a huge decision to make — and ultimately joined MC Hammer as a permanent backup dancer! For the next three years, he toured the world as part of the rapper’s entourage.

He danced at the Grammys, the MTV Video Music Awards, the American Movie Awards, and even “The Oprah Winfrey Show.” But Zo couldn’t shake his passion for football. He eventually left the group to return to his high school in Oakland, California, where he began coaching track and football. 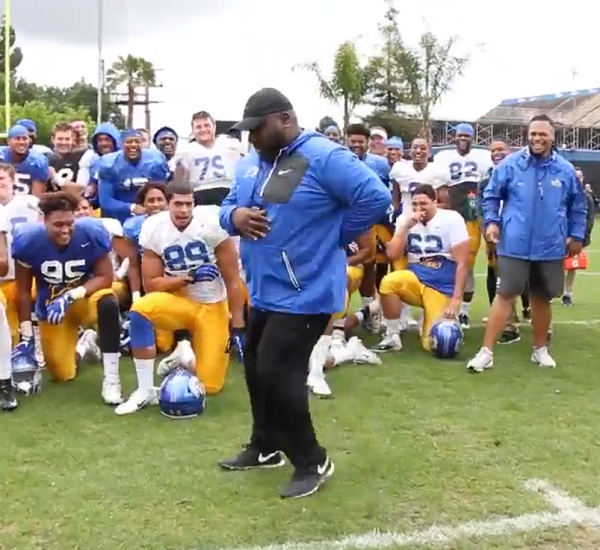 Decades later, Zo is one of the best-known and most respected college football coaches, and his hip-hop didn’t attract much attention at first. But in a training exercise in 2017, a familiar song started playing over the public address system. Head coach Brent Brennan learned of Zo’s excellent past and expected him to show his actions.

“The next thing you know is ‘you can’t touch this,'” Zuo laughed. “I thought, ‘oh, buddy. Put me on the main street. ” In the video, we can see that without missing a beat, Zo dives in and starts doing the iconic Hammer Dance he helped create all those years ago. The moves come to him as easily as they did back in the day, and his players obviously can’t get enough of his impressive talent.