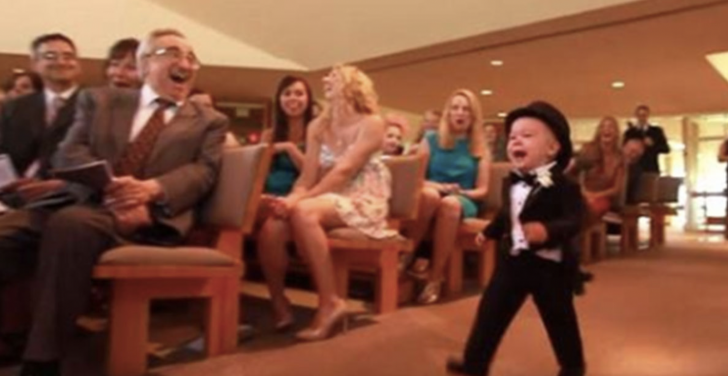 Take a moment to consider what a typical wedding ceremony entails. You most likely imagined a quiet audience, romantic music, and formal attire. There’s also the bride and groom, who are dressed to the nines and swooning over each other and their special moment. I can’t blame them; after all, it’s a big day.

So, one wedding began exactly like the latter description, only to quickly change as the youngest ring bearer walked down the aisle. And boy, did it change the mood of the ceremony!!!

The video footage begins by showing the flower girl and an older boy walking down the aisle, with grace. while holding hands. Okay, so there wasn’t tripping, nobody lost their shoe, and the flower girl didn’t surrender her basket. So far, pretty smooth.

But, hold it because the boy soon decides that he should have a bit of a chit-chat with the cameraman, leaving the flower girl hanging. From the look on her face, she was pretty humiliated.

She even tries to hold his hand again, only for the little boy to be too busy with his fingers in his mouth, as he finishes the short stretch down the aisle. But it’s no biggie, although the audience did get a bit of a chuckle!

Here’s where the real gold is at. A younger ring bearer, who is just a toddler, appears at the beginning of the aisle in his adorable tiny suit and top hat. My heart is bursting with happiness at how precious he is.

Then next thing you know, the little guy gets signaled down the aisle. However, instead of slowly coming down, he bursts out in laughter as he runs down to the cameraman to strike a pose. The wedding guests get a great laugh out of this hilarious boy, as do I!

The toddler’s hat falls off, and the boy takes off without it before meeting up with a family member towards the end of the aisle. I love how carefree he is! What a cutie.

While some people may not like the idea of having children be a part of their wedding ceremony, or even children present at all, they sure do bring life to the event and help break up the awkward, soppy moments of a wedding! I say the more minor mishaps a wedding has, the more natural it is.

To watch the hilarious wedding ceremony clip, be sure to hit the play button below. Share this video with your friends on social media if it made you laugh!