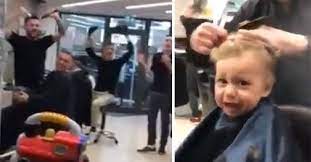 Children are frequently afraid of undertaking simple tasks. They all have fears, no matter how silly they may appear. It was getting his hair trimmed for the boy in this viral video. However, it was what the barbers did that made online people happy.

As he was ready to get his hair trimmed, the small boy was seen crying. For the young youngster, this was a strange and frightening event. He was terrified, as evidenced by his demeanor; he quickly burst into tears, screaming, and wailing!! Suddenly, voices came up, and the camera moves, showing three other barbers who had left their chairs to do a little performance for the boy. The three barbers sang their hearts out in an attempt to distract the kid, and the performance amused other clients.

Their performance was a version of the Italian song ‘I Due Liocorni’ which means” The Unicorn Song,’ a song based on the children’s poem ‘The Unicorn’ by Shel Silverstein. The poem tells the story of how the unicorns missed the ark of Noah before the great flood. The lyrics weren’t the important point in this performance, but the melody and joy proved to be what the little boy needed.

Upon hearing their performance, the boy cheered up and began smiling, as he watched the grown men in their silly performance. The barber working on the young customer couldn’t help but smile as his client was at peace again. The video went viral, and the three performing barbers received a commendation from commenters all over the world. What a lovely way to alleviate the young boy’s fears! Kudos to the kind-hearted barbers for their act of service!