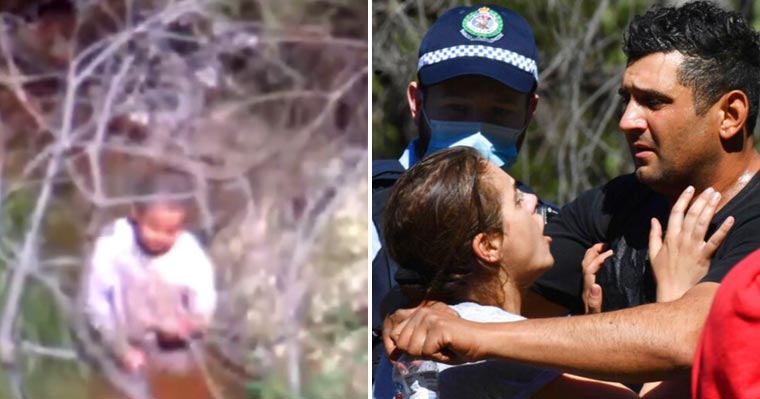 A missing three-year-old boy in Australia has been found safe after spending several days alone in the woods. According to a press release from the New South Wales Police, Anthony “AJ” Elfalak was found by police on Monday around 11:30 a.m., three days after his family reported him missing. AJ’s father, Anthony Elfalak, said it’s a miracle his son has been found!

AJ has autism and is non-verbal, making the ordeal even more worrying. The toddler was first reported missing around 12:30 p.m. on Friday after he disappeared from his family’s remote rural property in Putty, a village in New South Wales. His family suspected he had been abducted when they failed to find any trace of him after hours of searching. They reported seeing a pickup truck nearby, but police didn’t believe anything suspicious was behind the boy’s disappearance.

Authorities initiated a search right away, and hundreds of emergency service volunteers and other organizations, including NSW Ambulance, Rural Fire Service, State Emergency Service, and Volunteer Rescue Association, rushed in to help. To find the boy, the police used trail bike cops, divers, helicopter crews, and the Dog and Mounted Unit.

A police helicopter crew discovered AJ resting in shallow water in a creek bed about 1,540 feet from his home after a three-day search. The moment they found AJ was caught on camera, and the video was later shared on the NSW Police Twitter account. The footage showed the toddler sitting alone in the woods, sipping water from a nearby brook. AJ was kneeling in the riverbed when the first member of the team arrived.

“They put a hand on his shoulder and comforted him,” said Simon Merrick, NSW State Emergency chief inspector. “He actually took a knee on our rescuer’s knee and then actually, a big smile towards him, as well. And they embraced at that moment.”The officer who approached him will never forget the “massive smile” the boy gave him.

AJ was later evaluated by NSW Ambulance paramedics, who confirmed that he was in “good condition.” He was then brought to the hospital for further observation. Gerry Pyke, the paramedic who examined AJ, called him a “little survivor.” “Little AJ’s condition was quite remarkable. He was very, very thankful. I could see that in his eyes,” he said. As news of AJ’s survival reached his family, they burst into screams of happiness. They told 9News they “never gave up” hope that the boy was alive.

AJ fell asleep in the ambulance after being evaluated and reunited with his parents.“He’s just clinging to mum,” Anthony said. “As soon as he heard his mum, he opened his eyes and looked at her and fell asleep.” Pyke added that AJ woke up hungry and joked that he got “into about three slices of pizza and a banana so he’s pretty good.”

AJ’s only injuries were ant bites, diaper rash, and lacerations to his legs, so he’s expected to be okay. His mother, Kelly Elfalak, brought him home on Monday night to sleep on his own bed.“I can’t explain it, I’m so blessed,” she told reporters. “I’m so happy that he is here. He’s with us, he’s safe and well and healthy, that’s all that matters.”

AJ’s ability to obtain drinking water, according to Police Superintendent Tracy Chapman, was a crucial element in his survival. Despite being alone in the woods for three days, he did not become dehydrated. On Tuesday, AJ slept, ate, and played with his toys for the whole day.