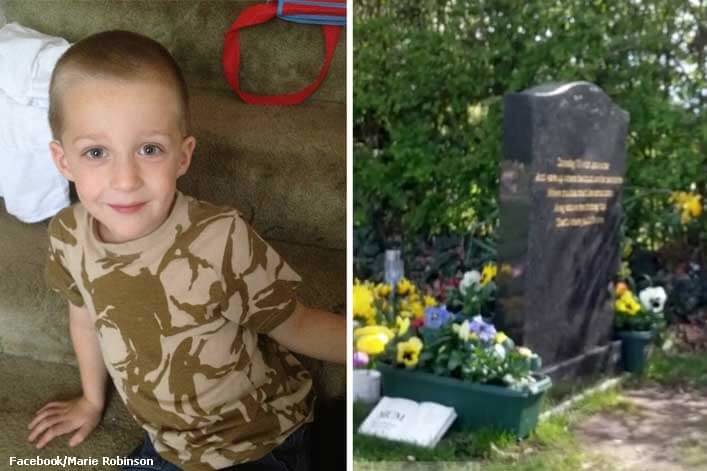 t’s not uncommon to hear stories of loved ones in heaven sending “signs” just when we feel like our heart can’t break any further. It’s believed that things like a butterfly or a bird often appear and bring along with them the presence of the angel who’s now in Heaven.

Marie Robinson experienced this first-hand. On April 1, 2014, she lost her four-year-old son, Jack, to a brain tumor. Jack had a twin brother, Liam, three older sisters, and a wonderful set of parents who adored him.

Every year on the anniversary of his death, Marie visits her son’s grave. But this year, as the third anniversary approached, Marie was struggling with unbearable grief.

“3 years ago today, I was totally numb at losing my little Jack. And 3 years on, Im still numb on this day. Today will be hard. We all miss him.”
Overwhelmed with emotion, the mother of five headed out to the cemetery, but not before begging for a sign—something that would let her know he was there with her.

“Early Saturday morning I got in the car and said out loud, ‘Jack, please show Mummy a sign’ and thought I’ll see him after I finished work.” Saturday afternoon, Marie sat on the grass next to Jack’s grave. She was alone, crying, and heartbroken—as any mother would be—when a red robin began flying around her.

Anyone who spends any time outside knows that birds are often very skittish. At the beach, if you run toward a seagull, they’ll flee. If you back your car out of the driveway and they’re on the ground, they’ll flee.

Birds in the wild don’t typically care for humans. But the robin at the cemetery was different. “With that, a little robin kept flying around me trying to land on me, eventually landing on my foot — he didn’t seem scared at all. He went and sat on a nearby headstone, so I got my phone out to film him being close to me and he flew over and landed on my hand.”

Marie stated that he was completely focused on her. The robin continued to stare her down and even landed on her shoulder! God’s sense of humour is wonderful. As a result, it’s no surprise that Jack Robinson appeared as a robin.

She could not be prouder of her son, whom she characterized as “special” with a “cheeky smile” as a mother. “He was only a small boy, yet he brought people from all over the world together,” Marie recalled.