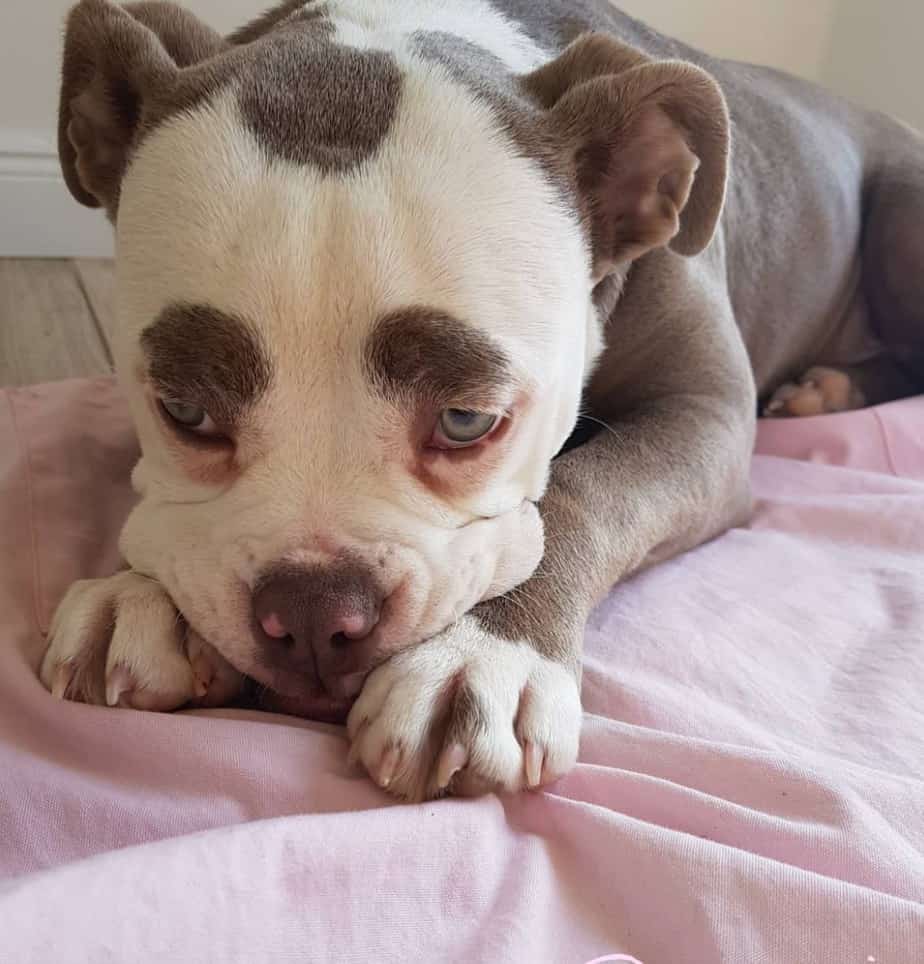 We’ve always been told not to judge people by their appearance, and the same applies to this English bulldog named Madame Eyebrows. The dog lives with her owners, her big sister Luna the yellow Labrador, and her little brother Willy the English bulldog, in a modern cottage in Germany. Madame Eyebrows is named as such because of the two giant spots above her eyes that make her look like she has actual eyebrows!

Not only that, but this trait always makes her look depressed, which is both amusing and “sad” at the same time! Janina, her owner, told The Dodo, “She always looked unhappy and had eyebrows.” Despite Madame Eyebrows’ perpetually depressed countenance, Janina claims that her true personality is the polar opposite of how she appears on the outside.

“She is very happy,” she described her. “She wiggles her tail, gives kisses.”And when you scroll through her Instagram page—which has over 134,000 followers to date—you’ll see what Janina is talking about. “In real life, you have to see her only a few minutes and you see that she is happy,” Janina said, saying that her husband agrees. “We don’t see only her sad face. We see how funny she is! And how much love she gives to us.”

But when you look at her pictures, you really can’t help but feel sorry for Madame Eyebrows because it always looks like someone refused her request for a walk or a treat. But the truth is, dogs don’t have eyebrows in the way that humans do. However, some breeds—like German Shepherds and Rottweilers—can use the ridge above their eyes to communicate and express certain emotions.For instance, if they lower their eyebrows, it usually means they’re angry. If they raise one eyebrow, it probably means they’re confused.

And if they raise both brows, it might suggest that they’ve seen something interesting. This sad-faced pup only shows that appearances aren’t everything. Despite always looking down in the dumps, Madame Eyebrows brings so much joy to her owners and the people who know her. And that’s what makes her truly special!
Another pup with a unique marking is Enzo Viola, a Golden retriever with a splotch of black fur on the left side of his face.

Golden retrievers are born with a base black coat and a modifier gene that turns their fur into a golden color. Almost every dog has this modifier, but Enzo had a little “blip” in his DNA that erased it on that part of his face. The dog’s black fur extends from under his left eye to his mouth—a feature that makes him look extra cute!

According to Enzo’s father, Eli Castro, he is the only one in his litter with such marking. They’ve also seen other Golden retrievers with black fur on the internet. Some, like Enzo, have them on their muzzles, as well as their ears and feet. The fact that Enzo has black fur isn’t the sole reason they kept him. He was the “sweetest and most lively puppy” of the litter, according to Clarissa, one of the dog’s human siblings, so they fell in love with him right away.