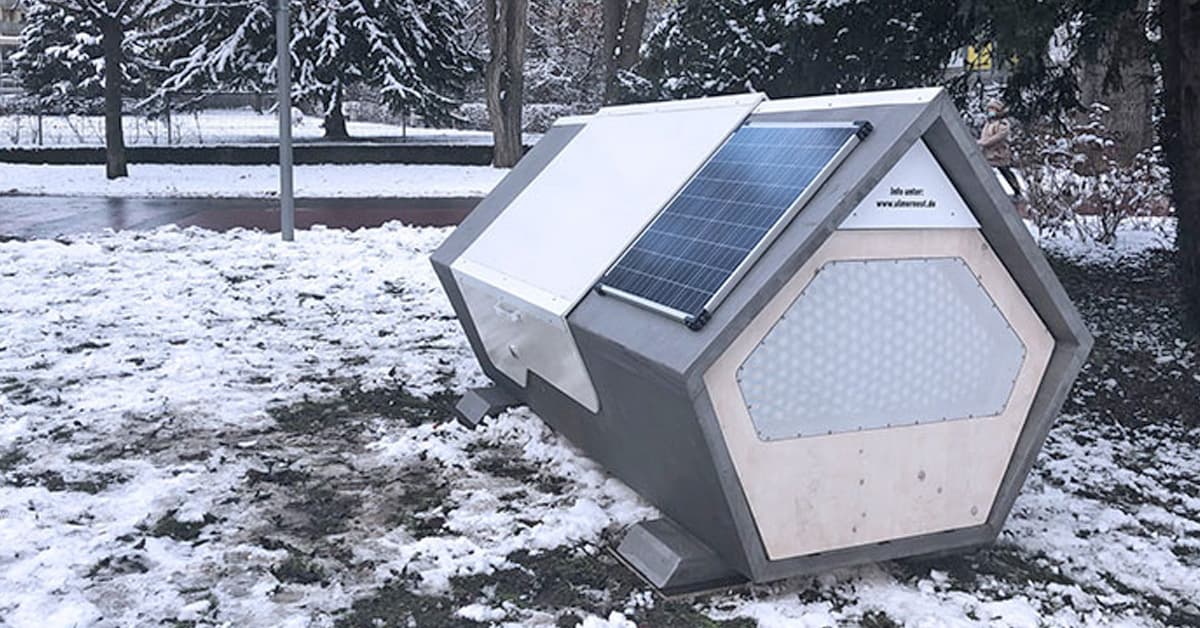 The winter months are tough for many of us, but these cold nights can be a nightmare for the homeless. Due to the lack of shelter, homeless people are at risk of getting frostbite during the frigid winter days!

A team of six entrepreneurs and technical experts are trying to tackle this growing problem head-on by installing futuristic-looking homeless pods across the city of Ulm. These homeless pods look like they’d take their users to another dimension, but they’re actually meant to function as an emergency refuge for the homeless during the night.

The design team first came up with the idea of these sleeping pods in 2018, but they were only able to test them last winter in parks and other places where the homeless frequently sleep. Some improvements have been made to their features since then.

The pods—dubbed “Ulmer Nest”—are constructed from wood and steel and are both windproof and waterproof. They’re meant to sleep up to two people are designed to protect their inhabitants from rain, frost, and humidity. The mini shelters also offer improved thermal insulation and guarantee fresh air circulation.

However, the creators have emphasized that these capsules aren’t an alternative to proper overnight shelters, especially as Ulm can reach dangerously low temperatures during the winter. The nests are equipped with solar panels and have enough room to accommodate the user’s belongings and a furry friend.

They’re equipped with sensors that can track humidity, smoke, and CO2 levels. Users can lock the pod from the inside using an electronic verification method. The chambers will not require keys to enter, although they will be locked during the day until 6 p.m. Lighting and an alert buzzer are also included in the capsules. Users can communicate without relying on cell networks because they’re connected to a radio network.

They’re equipped with sensors that can track humidity, smoke, and CO2 levels. Users can lock the pod from the inside using an electronic verification method. The chambers will not require keys to enter, although they will be locked during the day until 6 p.m. Lighting and an alert buzzer are also included in the capsules. Users can communicate without relying on cell networks because they’re connected to a radio network.

The designers skipped installing cameras in the pods to protect the people’s privacy. However, every time its doors are opened, a motion sensor is activated to let social workers know the capsules are in use, so they can get them cleaned the next day. The workers also visit the nests the following day to ensure that the cabin is empty. They also invite the user(s) to engage with Ulm’s homelessness service to ask for assistance if they need it.

Another great thing about the pods is that users need not fill any paperwork or registration to check-in, making the small shelters easily accessible. Aside from providing temporary sanctuary to rough sleepers, the pods also allow charities to connect with the city’s homeless population to help them better.According to the creators, the pods are still in the early testing phase, and there’s still a lot of work to do to improve their functionality and features.

“For this winter, we modified details of our door in an effort to improve usability both for the people sleeping in the Nests and the social workers checking in on them. Also, we spent a good deal of time improving insulation and climate management, to be able to keep humidity and temperature at the best possible levels while operating on a limited budget of energy,” Florian, one of the Ulmer Nest team members, said in an interview with Bored Panda.

However, they’re glad that the public has responded very well to the nests in Ulm. “We’ve even seen some effects that we didn’t dream of, like neighbors providing the overnight guests with hot tea in the morning and such.

Also, city officials were always very supportive and positive about the project, which helped us a lot. And then there’s a lot of those small moments when working on the Nests out in the city, and people come up to say thank you (homeless and not homeless alike). That also means a lot actually,” Florian said.

Homeless people tend to feel cast aside by society, and these kinds of initiatives are exactly what makes them feel seen and cared for. Hopefully, we’d see more similar projects in the future.