When you’re a kid waiting to be adopted and have a forever family, days seem to go by very slow. But when it finally happens… oh boy, and here is the story of adoption!

When we hear of positive news for ourselves, our reactions can range from a simple smile to a downright celebration. One little girl in South Jordan, Utah, went a step beyond the latter when she was told something by her school’s office manager, Jackie Alexander. 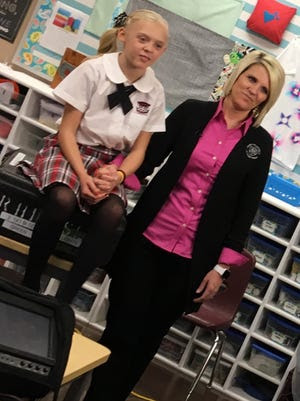 In October, Jackie called 11-year-old Tannah Butterfield into her office with some very important news to tell the little blonde-haired girl. When Tannah arrived, Jackie stepped out of her office, bent down, held onto Tannah’s shoulders, and looked her squarely in the face.

She then told Tannah that she just gotten off the phone with her foster mom and was told that her foster family would be adopting Tannah and her younger siblings. It was that news that caused Tannah to jump straight up into Jackie’s arms, shrieking with joy and incredible happiness, and kicking her legs wildly.

Tannah and her siblings finally had a forever family. And for several minutes, Jackie and Tannah embraced and kissed over the awesome news. There is almost nothing better than giving such joyful news to a child… just ask Jackie.