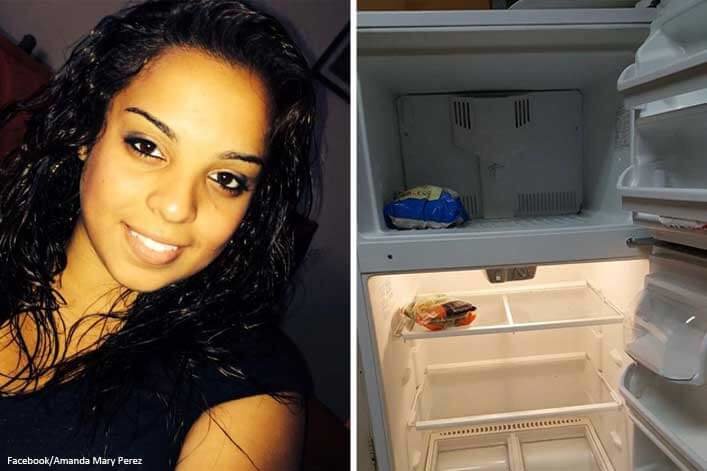 It’s crazy to think about the things we have that are so normal, we end up taking them for granted. It’s second nature for us to open the refrigerator when we’re hungry, and have an array of food options!

That’s what Amanda Perez thought until she went to work last week. The young mother is an in-home nurse, and she cares for people with all sorts of conditions and needs. But on this particular day, her client had asked her to help by cleaning his refrigerator.

When she opened it, she was confronted with the most tragic scene she had ever seen: “I have never felt so ungrateful in my life as I have today,” Amanda adds in a later Facebook post. “It doesn’t matter what you have now because as a human, you’ll always have the perspective that it’s not enough and that you need or want more,” someone once told me.

When she noticed the dearth of groceries in this man’s house, she turned around and asked him who buys his groceries. “He looked down, as if ashamed, and pointed at himself. ‘I buy meals when I have the money,’ he explained.

In that moment, Amanda, who admittedly loves shopping for new shoes, and finds joy in material things, felt convicted by her own desires saying, “All of a sudden I realized how my needs are WANTS and his wants are NEEDS.”

She cleaned the man’s fridge and finished her shift, but found herself still wrestling with what she had seen. “I got in my car and I knew I COULD NOT GO HOME knowing all of this.”

Amanda drove to the grocery store where she used her income tax money to fill the man’s fridge as best as she could. She shared the post in hopes of shifting other people’s perspectives the way hers had been that day.

“There are so many people out there that have it worse than we do. I opened my eyes and realized I need to stop being so mad about what I don’t have and start appreciating what I do have.”