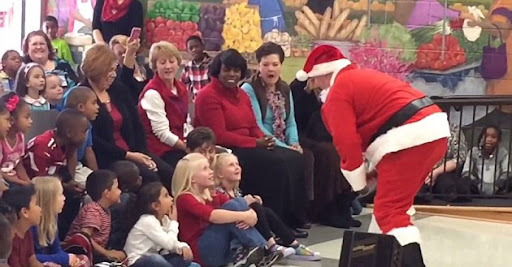 Captain Josh Risher of Columbia, South Carolina, was stationed in South Korea for a year and communicated with his family via Skype, and visited them for two weeks during the summer.

He went to Windsor Elementary School in Columbia, South Carolina, on December 10 to see his two daughters, Christy, 8, and Kaylee, 6, who were attending the school assembly. They had no idea their father had returned because they had been informed he would only be home by Christmas Eve. He stayed the day before at his parents’ place to surprise his children. He dressed as Santa and asked his children “Have you girls been good this year?”It took a moment for the kids to understand but the moment they recognized their dad they both jumped with joy,

screamed “Daddy” and hugged him so tight while the teachers, students happily cheered them on. Mr. Risher’s wife Amanda knew about the lovely surprise and kept it a secret from their two girls and their 3-year-old brother Jack. She happily said it’s an early Christmas for them. She does not have to bring any gift for the kids since their dad is at home and that’s the biggest gift they want.