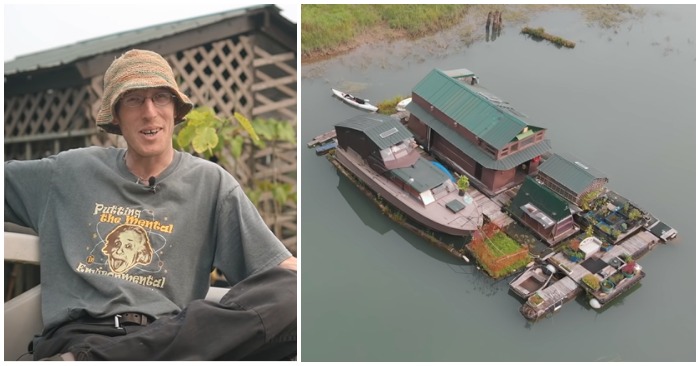 17 Years Living Off-Grid on a Self-Built Island Homestead – Built with Salvaged Materials In a time when the planet’s well-being is in danger, only humankind’s collective effort can save it. Shadow deemed that it was necessary to escape his former life in the city and lead the way towards preserving the Widgeon Slough area in British Columbia, Canada! 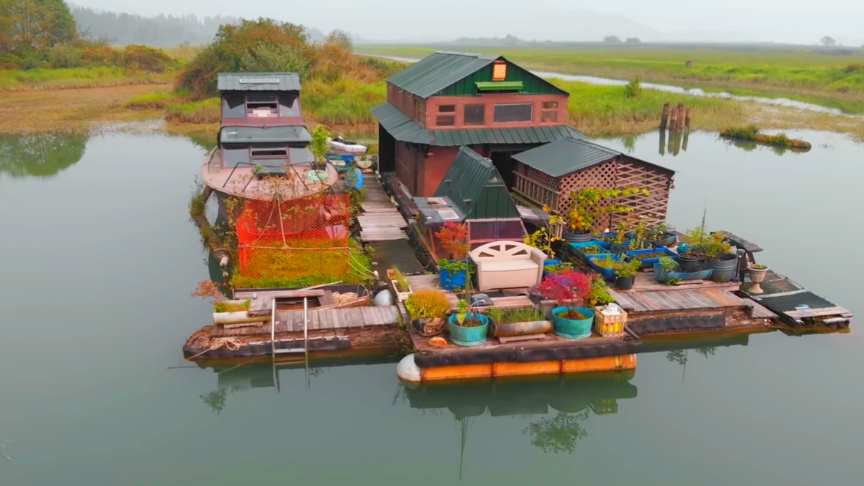 “I just got tired of the city. I got tired of where mankind’s going and I always had the idea I could do it better.” Shadow said. The wetland’s protector has been living off the grid for 17 years. Throughout Shadow’s stay in his homestead, he’s been able to keep the area safe from poachers, local governments, people who want to dump rubbish and toxic chemicals.

Nowhere Island is the name of Shadow’s homestead. It’s mostly built from discarded objects such as old logs, barrels, and floating scraps. Thankfully, he’s able to get a few bucks out of recycling objects he found while cleaning the wetlands. Some of Shadow’s friends also leave him excess materials such as boards, nails, and screws from their job sites.

The wetlands’ reclusive caretaker used to have wind generators for electricity. Because of the dangers of severe gusts, while living off the grid, Shadow opted to replace them with solar panels. He rewired them to extract the most energy out of them, even on days and seasons with minimal light. There are no wires or wirings on Nowhere Island, thus all of the structures have solar panels, allowing them to have electricity even when separated by storms.

The result of Shadow’s labor is an impressive structure floating on water–the perfect location to give him the most access to the area he’s trying to protect. Shadow’s workshop area dwarfs his kitchen in size. He spends most of his time doing lots of maintenance for the floating homestead, which makes all the tools more necessary. All of Shadow’s tools are neatly placed on the wall.

He also has firewood stashed in several locations in anticipation of cold days and winter. The library is one of Shadow’s most distinctive features. It also serves as a bio lab, where he conducts much of his research. Shadow uses this chamber to figure out what kinds of poisons and chemicals are hurting the wetlands and environment. Shadow’s arts and crafts area is upstairs, where he spends his time painting and reading. He utilizes this space as his main office as well.

During winter, the room turns into a dedicated movie station. Shadow’s shelves are stacked with a wide variety of movies he can pop at any time should boredom strike. Shadow’s favorite part of his home is the space where he does most of his Shaman work, such as card readings and energy work for protecting and healing the wetlands.

Shadow spends the majority of his time outside of his house. He looks after his compost pile, his floating garden, and his chicken coop, as well as filtering greywater with a natural filtration system made of maize and coconut husk layers. Shadow’s food waste is composted, and the greywater he creates is returned to the ecosystem safely.

Shadow built the Nowhere Island to be a self-sufficient structure for his lifestyle, hence the abundance of gardens for his produce.Despite his goal, he still has yet to build a sustainable filtration system for potable water. In the meantime, Shadow goes on a trek up the mountain to gather water from a natural spring or from his neighbor who gets water from the same spring.

Going to town is also difficult and time-consuming. Shadow rides a skiff or a kayak to get to land and uses a bicycle to ride all the way to the town for supplies and other errands. Sometimes, his friends and locals visit his home for a short laugh and a story or two. Still, Shadow prefers to be alone with nature. “It’s one of the faults, but at the same time, one of the strengths,” he revealed.

At first glance, Shadow’s life might turn off a lot of people. But for him, living off the grid comes with plenty of adventures and a rare kind of tranquility you cannot experience in the city. In his 17 years of living in his self-built home, Shadow has seen plenty of insects, mammals, birds, and plants that are thriving harmoniously–all thanks to his help. Perhaps it’s not too late for our planet if we could be like Shadow, even for just a tiny bit.

Get a first-class tour of Nowhere Island by watching the video below from Exploring Alternatives: