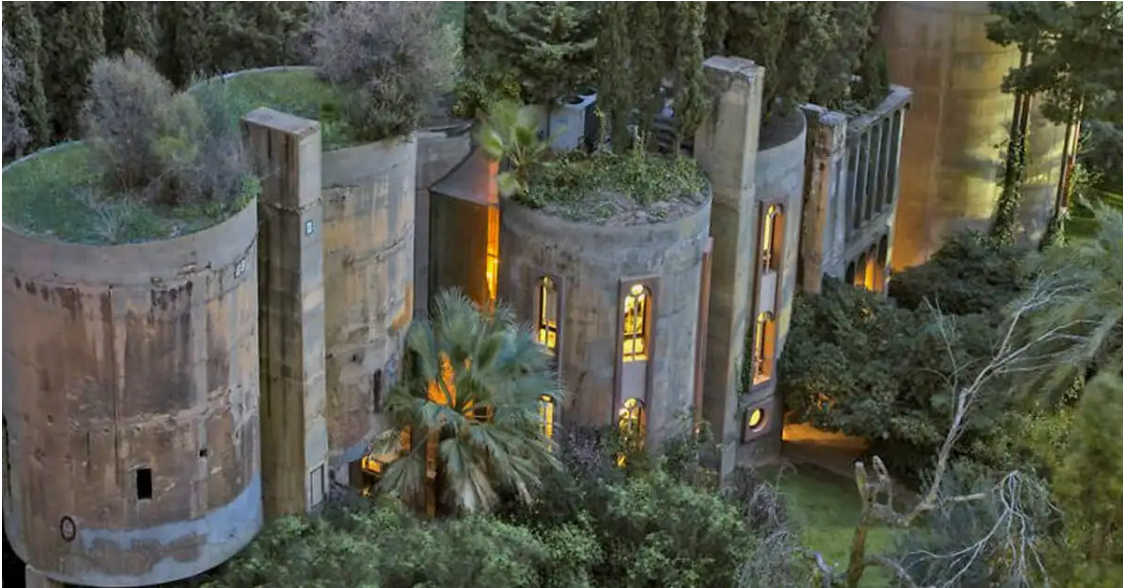 The world is full of extraordinary and beautiful homes, but there are some that are so unique that they deserve special attention. Can you imagine turning a cement factory, an abandoned one at that, into a beautiful and relaxing home? That is exactly what the talented architect Ricardo Bofill did to a cement factory outside Barcelona, Spain!

Bofill came across La Fabrica, an abandoned cement mill on the outskirts of Barcelona, in 1973. He noticed the building’s infinite potential and chose to turn it into a house. Both the building and the architect would be changed as a result of the finding. The factory became the heart of Bofill’s domestic and professional life throughout time, and it has undergone renovations that honor the building’s history!

The renovation is a massive project, as the cement factory encompasses 30 silos, a smokestack, cavernous machine rooms, 2.5 miles of underground tunnels, and several large rooms to accommodate huge equipment and machinery. Bofill spent the first year and a half of the project deconstructing the space and eventually building living quarters and an architecture studio on a 32,000-square-foot space.

The WWI-era cement factory worked its way through Catalonia’s post-WWII industrial revolution. Changes in industry processes meant that additions were made to the original structure, resulting in a hodge-podge of architectural styles. Bofill decided to strip some of these off in the renovation process. Peeling layers off the building meant that Bofill could build some of it back again. Some sections were kept, while the others were completely demolished. Eventually, only eight of the 30 silos were kept and cleared of all cement and debris.

After years of partial deconstruction, La Fabrica is now a comfortable home with all the amenities of modern life. From a hard, cold, industrial structure, Bofill crafted home with spacious living areas, libraries, rich gardens, and cozy bedrooms. He shared, “Presently I live and work here better than anywhere else. It is for me the only place where I can concentrate and associate ideas in the most abstract manner.”

The former industrial complex is divided into four distinct spaces – an architectural studio, exhibition hall, gardens, and living area. A true artist, Bofill sees La Fabrica as a piece of sculpture. He said, “A factory is a magic place which strange atmosphere is difficult to be perceived by a profane eye. I like the life to be perfectly programmed here, ritualized, in total contrast with my turbulent nomad life.”

The architect adds, “The Cement Factory is a place of work par excellence.” No two rooms are alike, and each has its own distinct design and purpose. “I have the impression of living… in a closed universe which protects me from the outside and everyday life. Life goes on here in a continuous sequence, with very little difference between work and leisure,” Bofill said.

As a home, La Fabrica is also becoming reclaimed by nature. The exterior was laced with vegetation and currently overflows with lush greenery including eucalyptus, palm, and olive trees. According to Bofill, this gives the building a “mysterious aspect of romantic ruin that makes it unique and unrepeatable.”

The silos are now covered in growing vines, further obscuring the distinction between the old and current roles of the cement mill. La Fabrica, which used to churn out cement and dust, is now an architectural marvel. Bofill and his crew transformed an otherwise uninhabitable room into a distinctive and attractive venue, both inside and out. The house is proof that even the most strange places can be transformed into a home with a little imagination. The increasingly warm and pleasant home is still considered a work in progress, but it is an amazing example of transformed industrial architecture. Source: https://mypositiveoutlooks.com/