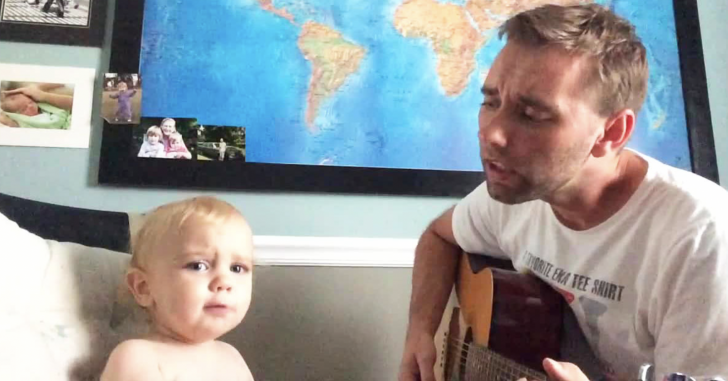 Even while developing in the womb, newborns pick up and absorb muffled noises and vibrations through their mother’s stomach. The baby imitates whatever mum does. My mother ate as much variety of cuisine as she could while pregnant with me. She ate Indian, Greek, and Mexican meals while listening to relaxing music!

like Joni Mitchell and Leonard Cohen in an effort to expose me to fabulous cuisines and some of the greatest music of her lifetime! It’s no surprise that my favorite food is hummus and I have an admiration for well-crafted, thought-provoking lyrics!

It’s so important to surround babies and small kids with a healthy, nurturing environment, because little humans are nothing more than sponges, looking up to their big humans for guidance and growth.

This video opens to a doting dad with his cute little son, Patrick, sitting on the couch spending some quality father-son time. Dad’s got his guitar strapped on, and he starts to strum. But, the man isn’t singing a song he knows, or anyone knows for that matter.

He’s literally making it up on the spot, saying, “Helloooo Patriiiiiick, we’re singing a sooooong, about youuuuuuuu….” He’s cueing in his son between lyrics. It gets even better because Patrick can’t really form words, but the toddler still chimes in! His sounds are nonsensical, but his musical ability is blatantly obvious. He’s able to jump in and sing to the best of his ability.

The kid’s got range and technique, too! He alternates between low staccato sounds, then builds up to a louder, more pronounced and projected sound. This kid shows no fear and lots of natural talent.

Click below to watch little Patrick get a taste of what life could be like as a musician!