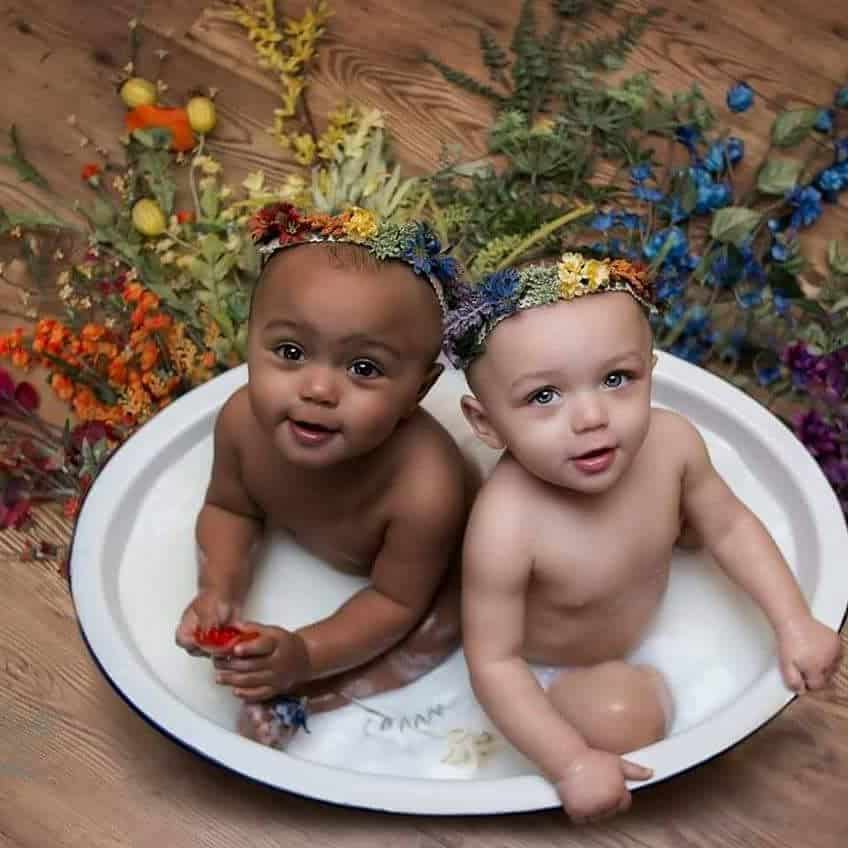 When you hear the word “twins,” what immediately comes to mind is two people—or things—that look alike. But that isn’t the case for twin sisters Kalani and Jarani Dean. The pair are quite the head-turner because they’re the perfect picture of a phenomenon rarely seen in twins.

While parents usually wage a friendly match over who looks more like who, Whitney Meyer and Tomas Dean had nothing to “compete” over. That’s because their twins reflect each of their unique qualities in the most remarkable way. Kalani was born with fair skin, like her mother, who is white, while Jarani has brown skin, like her dad, who is black!

Whitney said she thinks of the girls as a symbol of racism. She hopes that through them, people are encouraged to “love everyone equal.” “You can’t look at one and not love them both,” she told TODAY. “They’re the same girl, just different colors,” Whitney remembers the fateful day her twins were born on April 23, 2016, in Quincy, Illinois.

“Kalani was as white as can be. I was just in denial because you know the odds of this?” she said. “I would never think I would have a black and white twin. That’s why I asked if she was albino because she was just so white.” Tomas, on the other hand, was equally shocked.

“I was like, ‘Yeah, she’s a little light,’ but I thought maybe babies are that way when they’re firstborn. But then a couple of minutes later, her sister came out a little darker,” he recalled.“In a million years, I never thought I’d have a girl with blue eyes. I didn’t think I could pull that one off!”

The people they meet never believe that they’re twins, so Whitney dresses them in matching outfits, hoping that it will somehow show their resemblance. The twins arrived almost two years after Whitney’s two-year-old son, Pravyn, passed away in a drowning incident. Whitney said Jarani looks so much like Pravyn, who also had darker skin like his dad, while Kalani looks like her older Caucasian brother Talan.

Talan, who Whitney describes as an “amazing big brother,” reads to the girls every night. This phenomenon of biracial siblings who look very different is a rare occurrence. However, tons of genes control skin tone and eye color. Because of this huge mix, even scientists don’t know all the ways they can interact. Dr. Bryce Mendelsohn, a medical geneticist at the University of California, San Francisco, explains:

“The physical traits you can see in a person are just a very small sliver of the genetic diversity across human populations. A lot of times we only focus on the things our eyes can see, but what we see is a tiny tip of the iceberg of the actual genetic diversity in everyone,” he said.

Certain physical attributes are more widespread in certain ethnic groups, but the genes underlying the majority of physical traits are found in people of all races, according to him. “Sometimes when you flip a coin eight times, it will come up heads all eight times. When you have a lot of genes, it’s kind of like that. “They’re all shuffling at random, and you can get all kinds of results,” he explained.

While Tomas knows why others are interested in his daughters’ beauty, he encourages them to look past their disparities in appearance. “I hope that a lot of people realize that race isn’t such a huge deal.” “What matters is love,” the pleased father stated.

“Surprising things can happen, and life is a gift.” It makes no difference whether you are black or white. Always remember that you are gorgeous no matter what color you are! If you want to see what’s the latest about the twin, please follow their Instagram page.