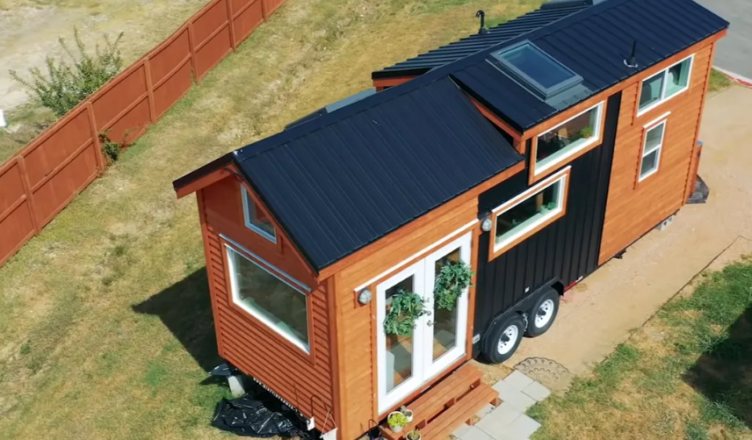 Living in a tiny home has a lot of perks – you get to live a simpler—or what some might say—a more authentic life, you save money, and you’re able to pare your belongings down to the real essentials. Despite these advantages, deciding on a tiny house interior design isn’t always easy. You only have a small space to work with, and that definitely adds to the challenge.

But this did not deter this young couple from taking a house loan so they can downsize and build their dream home. Molly and Ken’s abode is a tiny house on wheels stationed in an R.V. park in Austin, Texas. This location was a big draw for the couple since they get to live within a community of like-minded people. Intending to save money and travel the world as much as they can, the couple decided to move into a tiny house.

Before adopting this lifestyle, they lived in an 800-square-foot apartment for a few years. Then, they moved into a 13,000-square-foot house and found themselves buying many pieces of furniture to fill up the space. Because of how big it is, there was one room that they never walked in. That’s when the idea of downsizing came to them.

The duo had to take out a tiny house loan to complete the home, which they were able to do with a budget of just below $80,000. Now, their only real housing expense is the minimal rent at the R.V. park.Their home measures 267 square feet with an expansive 11 and a half feet high ceiling. The house has a refreshing and airy design, and its interior is filled with plants.

Molly and Ken wanted as much natural light as possible, so they installed three large skylights as well as windows on each side of the house. The living room features a large couch and two ottomans, all of which have storage space under each cushion. They were able to purchase a home with a kitchen equipped with full-sized appliances such as an oven, a three-burner cook-top, a farmhouse sink, and a refrigerator thanks to the house loan.

They also have a washer and dryer in there. They have a pull-out projector screen for game nights, as well as a separate loft for extra storage. They have a separate staircase that leads up to their bedroom loft. Its first three steps reveal additional compartments, while the cupboard beneath the last five steps serves as their closet.

The climbing plants on the walls of their sleeping area add a nice touch to the room. They also have a television up there, which they use to watch TV and play old-school Mario video games. Their bathroom is unlike any other in a tiny house. They were able to fit a sauna inside, in addition to a fully functional seat, non-compost toilet, and rainfall shower.

Despite the fact that it is a few centimeters away from the shower, the couple claims it is completely worth it. Furthermore, it keeps them warm during the colder months. They realized that by downsizing, they were also choosing to create a life on their own terms – one that would allow them to live it to the fullest! In the video below, you can take a look inside Molly and Ken’s incredible home.