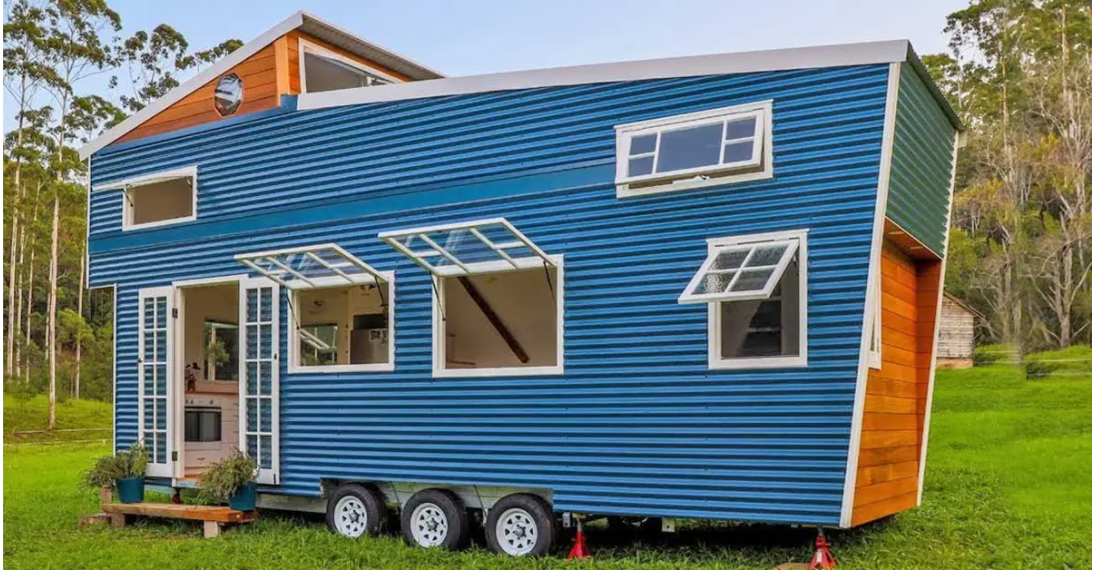 This home in New South Wales, Australia, boasts a feature rarely seen yet much-needed in a tiny house: a pop-up roof. In 2019, Bryce Langston and Rasa Pescud of Living Big In A Tiny House visited Ben and Nat’s home in Byron Bay.

With its corrugated iron and Western red cedar cladding, as well as its blue and white paint, the house is striking from the outside. The couple was in the last stages of finishing their tiny house project at the time of filming! 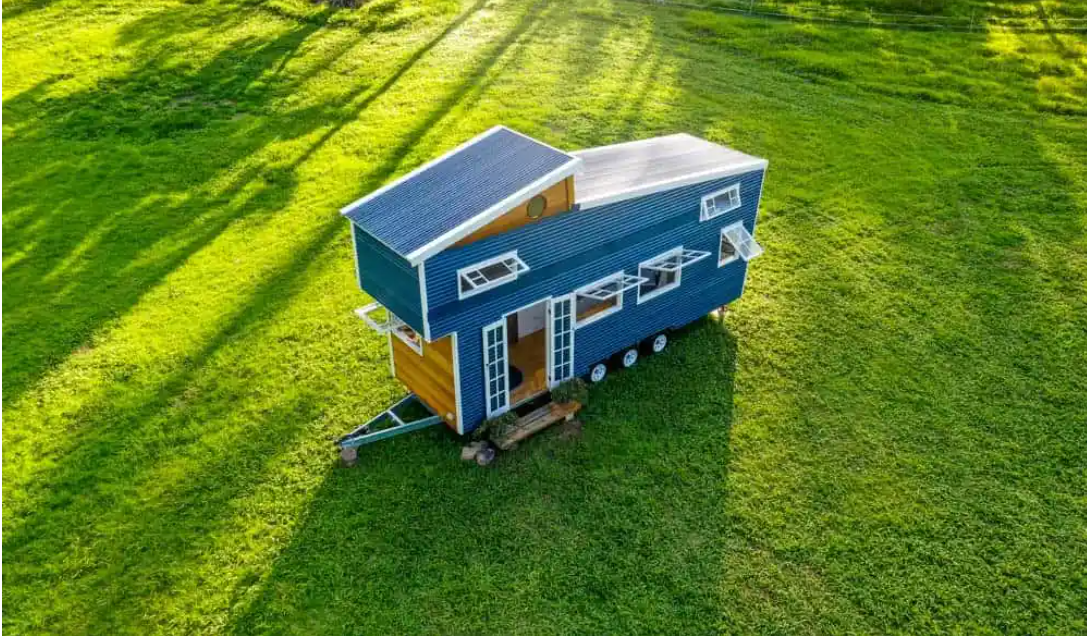 The house features a prominent wedge on the top that is intended to provide them with standing height in their sleeping loft. Ben and Nat believed it was critical for their house’s long-term viability. It rises to the road-legal height with the roof level after the home is in place. Ben described the project as a “true labor of love.”

“It’s been about six months of intense construction.” We’ve been unemployed for six months, so this is pretty much all we’ve done,” he explained. Ben’s father also contributed significantly to the housework, as did his brother. 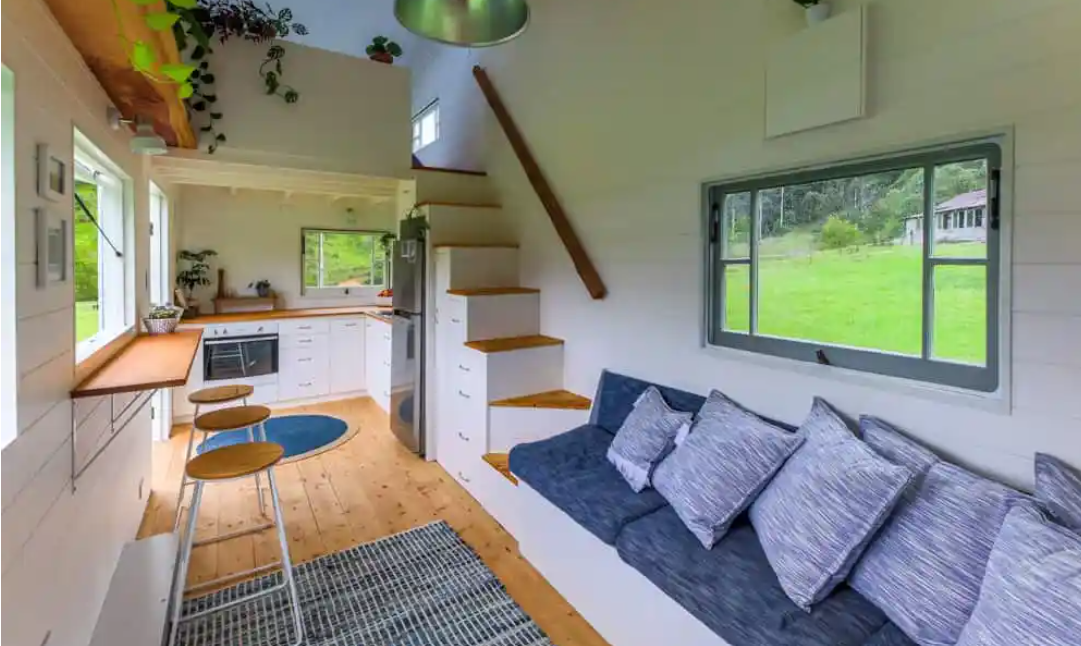 The creative freedom that comes with building your own home is fantastic. They were able to bring their visions to life, allowing them to build the home of their dreams. Ben and Nat placed their little house on his parents’ 260-acre property, but he stated it wouldn’t be its permanent home because they plan to move it in the future.

The couple both love natural timber, so they have a lot of that inside the home. They designed it to be clean, white, and open, so it would feel bigger than it actually is. The plants displayed throughout the space also give it an extra homey atmosphere. 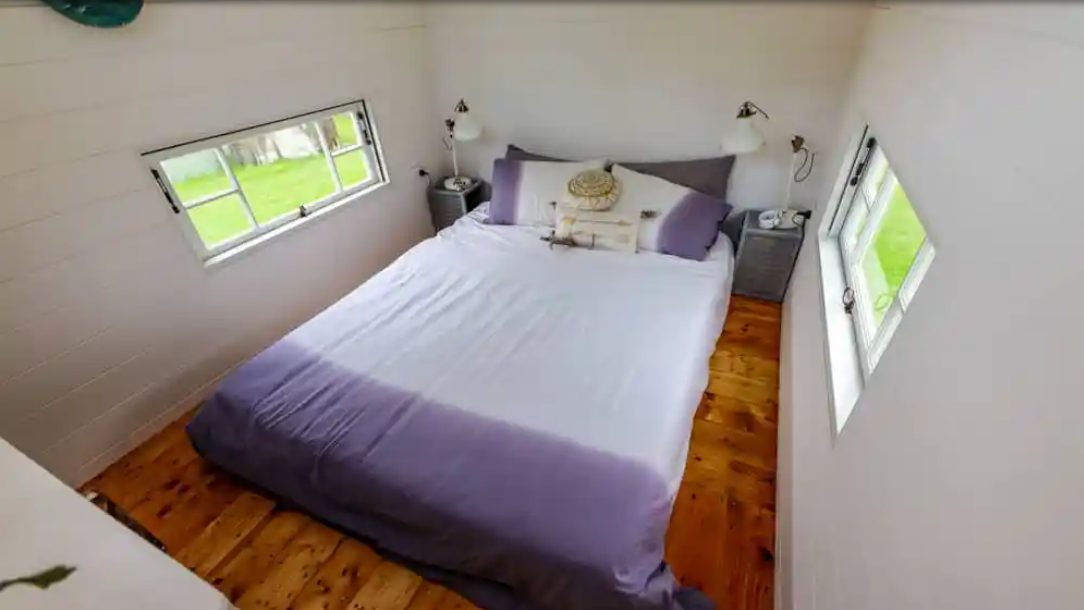 The strategic placement of the windows also allows them to engage with the outside. “We actually spend a lot more time outside the house as well, so engagement with the environment was really important to us,” Ben said. The kitchen is an open space with plenty of storage and a full-size fridge placed under the stairs.

The lounge area is built into the house and allows the family to sit comfortably together. The seats can be lifted up to reveal storage space underneath. The stairs behind the couch lead to their daughter Charlie’s loft, which has a bed, a desk, and a little cushion.’ 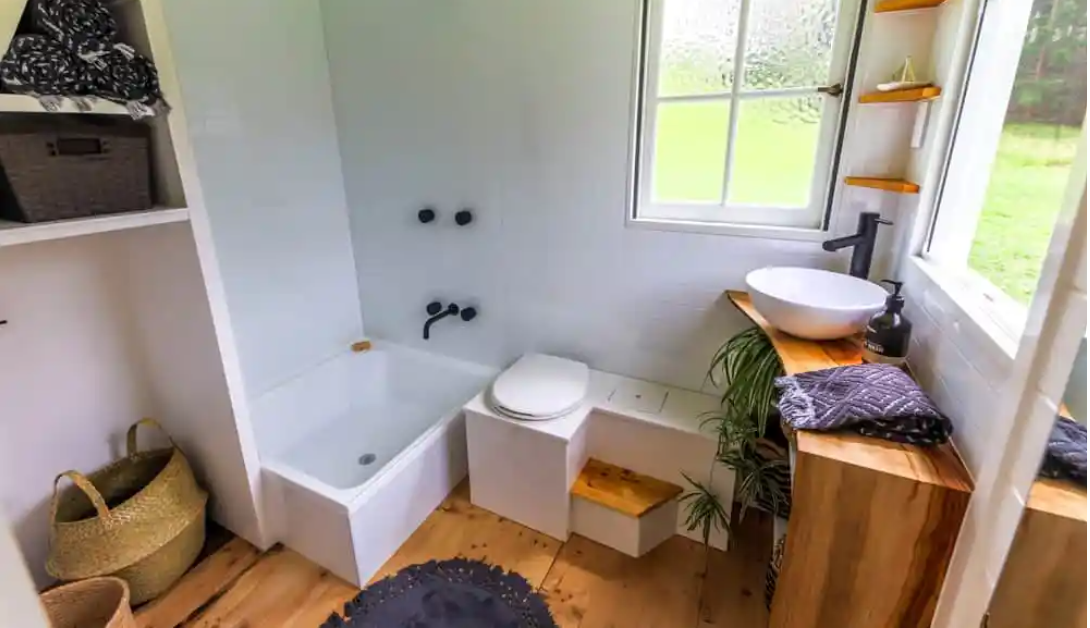 Underneath it is the bathroom, which features a composting toilet, a waterfall vanity, and a shower with a mini tub.Ben and Nat’s sleeping loft is spacious, and they can stand in it because of the ultra-convenient pop-up roof.

The windows there provide a great view and allow the breeze to flow throughout the house. “To be able to now live in a house that we have built with our own hands it’s hugely rewarding for us,” Ben said.

Ben and Nat have done such a great job with this home that it’s quite hard to believe it’s their first DIY building project. Make sure to check it out in the video below.